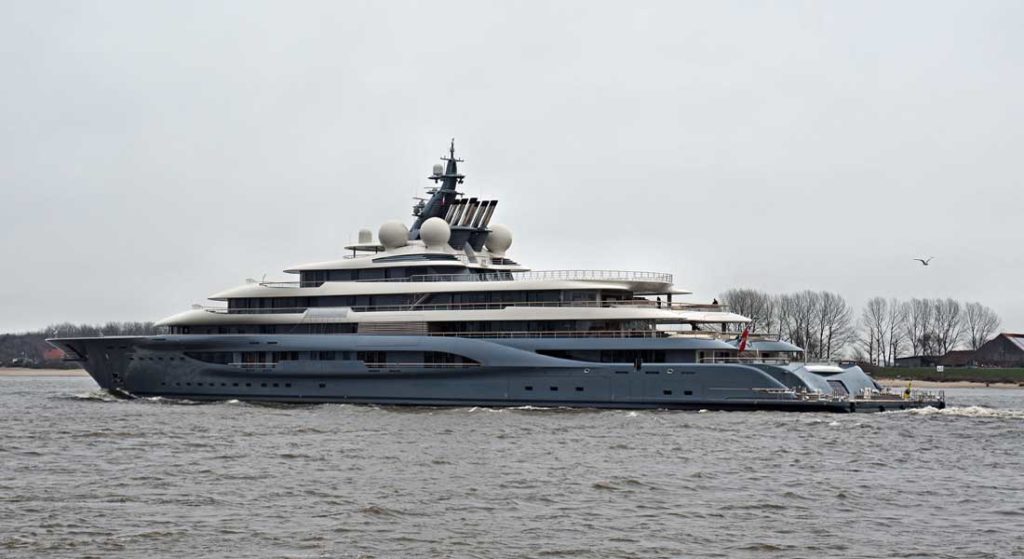 The stylish, super-size superyacht Flying Fox, which has captivated yacht watchers the past few years in build, is on her maiden voyage. She’s departing Germany today for the more northerly climes of Norway.

Previously referred to as Project Shu, the 446-foot (136-meter) Flying Fox is a Lürssen project. (Though her name is covered in these photos, publicly available AIS data reveals her name.) While shutterbugs caught her in her early stages of construction as early as 2016, the shipyard could not comment until springtime last year. At that point, Lürssen confirmed her LOA, as well as her healthy beam of 67 feet (20.5 meters).

The shipyard additionally confirmed a few other facts. For example, it revealed that styling comes from Espen Øino. The renowned designer has graced Flying Fox with shapely curves best admired from above. (Click the link above, and you’ll see what we mean.) In addition, the megayacht has several fold-down balconies as well as platforms for the owner’s party to enjoy. As much as they’ll likely pursue swimming in warmer weather, the guests won’t have to depart the yacht to do so. Flying Fox has a huge pool nestled into her aft deck.

While Lürssen did not disclose much about the interior, it does say that Flying Fox’s owner tapped Mark Berryman Design for the task. Subdued, neutral colors combine with tactile finishes in the relaxation and sleeping spaces throughout. Peter Lürssen, managing partner of the shipyard, says, “The owner’s input within all aspects of the yacht’s design was clear, strong, and exacting.” The yacht further posed “a significant challenge.”

If the megayacht’s name sounds familiar, it’s because another Flying Fox was cruising in recent years. That project launched in 2012, measuring 239’5” (73 meters)—a size that, while still large in today’s market, uncannily seems small in stature in comparison to the new yacht. She saw construction at fellow German shipyard Nobiskrug, and now cruises as Dytan.