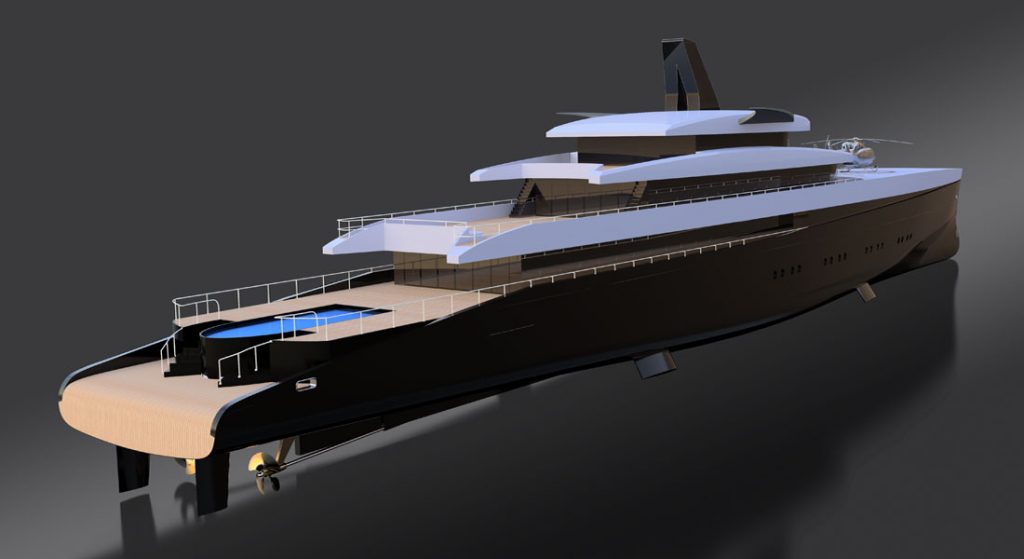 Most modern megayachts fit in as many creature comforts as possible within a specific length. While it sounds logical, it’s not exactly efficient. It tends to result in yachts whose superstructures rise quite high and whose beams extend out. These, in turn, require high horsepower for operations—and, ultimately, higher costs. Laurent Giles Naval Architects has a solution. It’s the High Efficiency Motor Yacht, a.k.a. HEMY concept. In brief, the HEMY concept is a slimmer superyacht, resulting in a better performing one, too.

Dillon Plantinga, a naval architect with Laurent Giles, says, “Naval architects have long known that for a given speed, the longer, leaner, and lighter the vessel, the better in terms of performance and efficiency.” The problem, he adds, is “the superyacht market largely ignores this.” In fact, he says, length ends up being a constraining factor. So, Platinga explains, “We said, ‘If an owner were to come to us looking for the ‘features’ of a 75-meter, while being efficient and not sacrificing hydrodynamic characteristics, what would such a vessel look like?’”

Those features include suite-like guest staterooms and apartment-like master suites. They further include big swimming pools and equally big collections of watertoys. Add in big beach clubs and abundant alfresco space, too. Keeping the principles of long, low, lean, and light in mind, Laurent Giles penned a 361-footer (110-meter) with a slim 41-foot (12.5-meter) beam. For comparison, a newly completed 110-meter from a European megayacht builder has a beam of 54 feet (15.4 meters). That yacht also has one deck more than the HEMY concept: six, versus five. To address the “light” aspect, she requires no more power than a 75-meter. 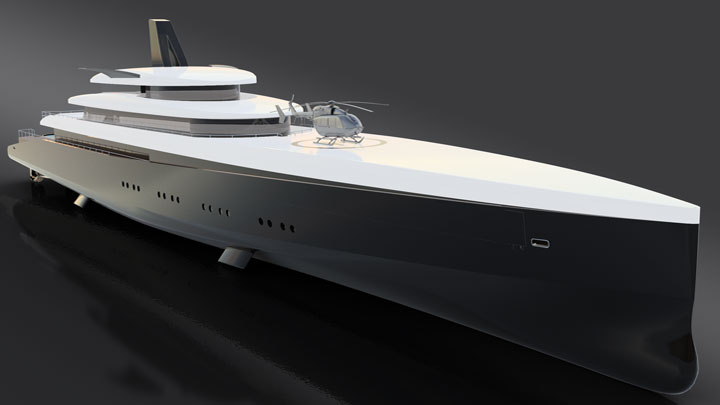 In fact, David Lewis, managing director of Laurent Giles, avers, “The HEMY concept with the same power as a typical 75-meter achieves speed improvements of 2 to 3 knots.” In other words, he adds, she “achieves the same cruising or top speed for 65 percent of the power.” She further offers “corresponding savings in fuel consumption.” Range at the 17½-knot anticipated cruising speed: 6,500 nautical miles.

The HEMY concept does this within a 3,000-gross-ton package. (The above-mentioned 110-meter pushes 4,500 gross tons.) This means she won’t require lifeboats, instead able to rely on liferafts. She’s also not impacted by restrictions in luxury outfitting materials.

Speaking of luxury, the luxury amenities will surely be important to potential HEMY concept clients. Laurent Giles puts six guest suites on the main deck and devotes the entire deck above to the owners. Equally notable are the crew accommodations. Thirty crew, some in single cabins, take over the entire forward portion of the lower deck. The captain and first officer each get accommodations on the topmost deck, just aft of the wheelhouse. Two beach clubs, a dive center, and a cinema are among other HEMY concept creature comforts.