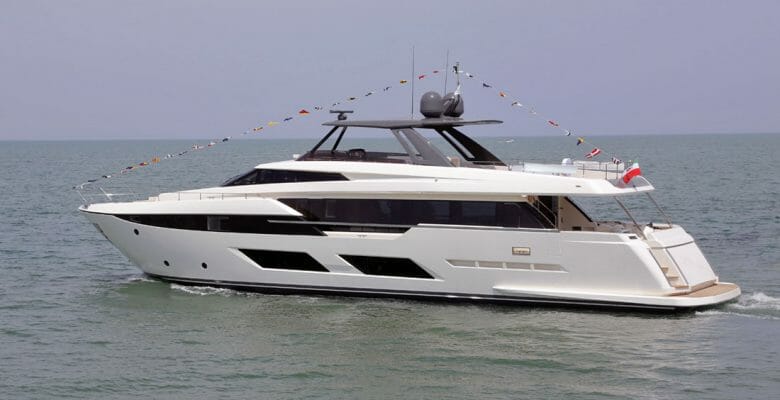 Ferretti Yachts customers anxiously awaiting the shipyard’s new flagship, the Ferretti 920, need only wait six more weeks to get aboard. This, after waiting the usual year to two years after learning about her.

Despite her name, the Ferretti 920 actually measures close to 94 feet (28.49 meters). Having splashed this month, she’s set to appear at the invitation-only Ferretti Group Private Preview in Monaco in early September. (No cause for concern, though, if you’re not on the list. You can get aboard, too, at the Cannes Yachting Festival several days later.)

A few things characterize the new megayacht. For one, the Ferretti 920 offers prime real estate to the owners on the main deck. It comes thanks to raising the bow, and pushing usable space out full beam. If you cruise with a crowd, consider opting for the four-stateroom configuration below decks. This provides for two twins and two doubles. Alternately, the Ferretti 920 can have a full-beam VIP, along with a smaller VIP opposite a twin stateroom, below. Interestingly, Ferretti Yachts expects some buyers to prefer that the full-beam VIP be the master instead. That option comes hand in hand with a formal dining area fully forward above decks. It may suit buyers who don’t want their stateroom in proximity to the galley.

Yet another notable stateroom option: The captain’s cabin can sit opposite the crew mess or fully forward. Either way, it has an en suite head.

Since flying-bridge megayachts are meant for making the most of time outside, the Ferretti 920 offers attractive alfresco areas. The bow should be particularly popular most days. Besides having a sunpad, it also has a handful of settees and tables, for a relaxing atmosphere. In fact, two of the settees face the horizon.

The next step for the Ferretti 920: sea trials. The shipyard expects to confirm cruising speeds in the mid-20s. Three MTU engine packages are available.

If you can’t make it to Cannes to see the yacht, hull number two of the series comes to Yachts Miami Beach in February. Hull number three is under construction, too. Designed for the Asian market, she debuts next year as well.