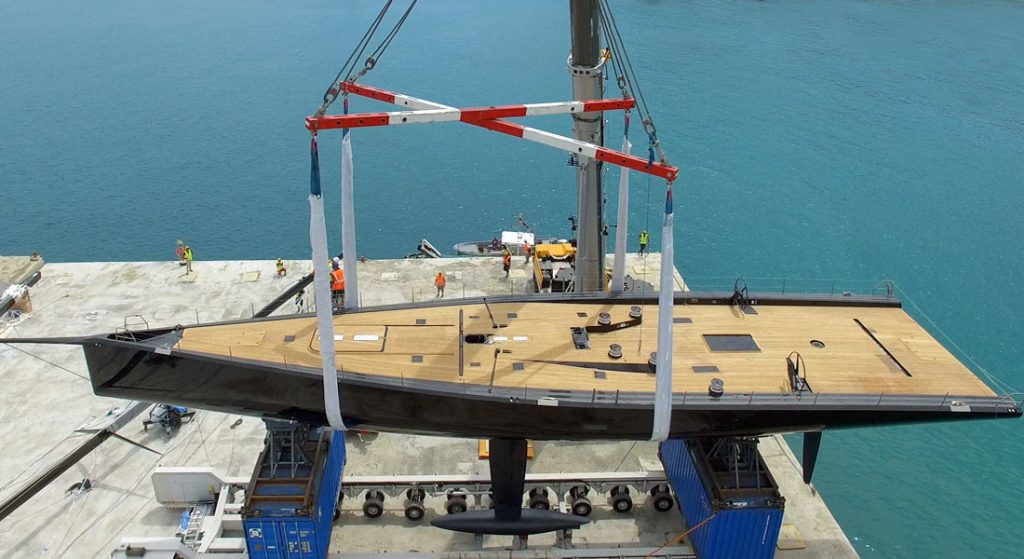 Every Wallycento follows a box rule. Each also can have different builders and designers. (To learn more, see our article “Wally Introduces Wallycento Sailing Superyachts.”) The Wallycento Tango keeps a focus on performance thanks to Mark Mills of Mills Design. The studio has a number of regatta winners out on the water. Mills still gave the new launch her own identity, though, to set her apart in her series. He did so through “dramatic deck geometry with a novel interior layout,” he explains. In addition, he engineered her for better light-air performance, routine conditions in the Med. Mills specified the maximum permitted sail plan with the lowest permitted displacement under the box rule. Tango has a sail area of 6,889 square feet (640 square meters) and displaces 47.5 tons. In addition, most of her below-water volume sits forward in comparison to the other Wallycentos. And, she looks longer aft.

As for the “novel interior layout,” Mills put the engine room and service area between the guests (forward) and saloon (aft). Well-known design studio Pininfarina complemented the layout with super-light materials, an admitted challenge. Furthermore, Pininfarina fulfilled the owner’s request for indoor-outdoor uniformity.

Mills was not the only first-time Wally collaborator when it came to the project. Persico Marine was the builder. Tango is the yacht builder’s first cruising superyacht, in fact. Typically, though, it does build raceboats. The yacht builder has contributed its skills to America’s Cup catamarans, Mini Maxis, and more. Persico Marine constructed not just the hull but also developed lightweight solution for wood paneling and even door hinges.

Tango will tussle with the three other Wallycento deliveries in Les Voiles de Saint Tropez at the end of September.