Home / Yachts / Sailing Yachts / Ngoni: The Beauty in the Beast 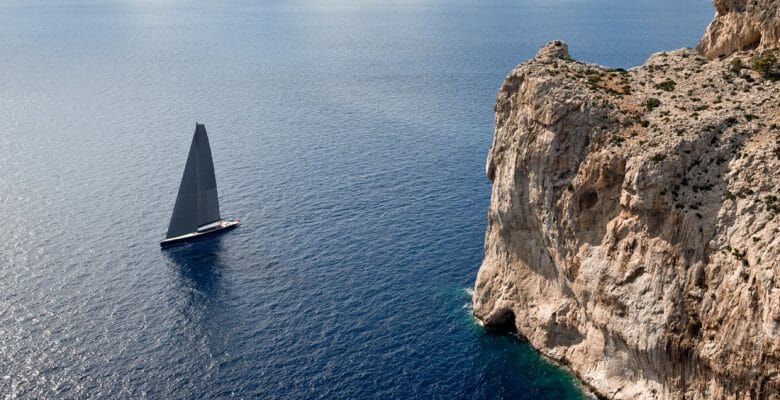 The story behind Ngoni is now well-familiar. The owner told Royal Huisman and Dubois Naval Architects he wanted a “beast” of a performer. Fast and furious. Edgy. A weapon. He used all of these terms, and more, to describe the sailing superyacht that became this 190-footer (58-meter). He challenged them, even pushed them, by their own acknowledgement. In the process, collectively, they created a yacht whose seemingly aesthetic-only elements also have important structural benefits. 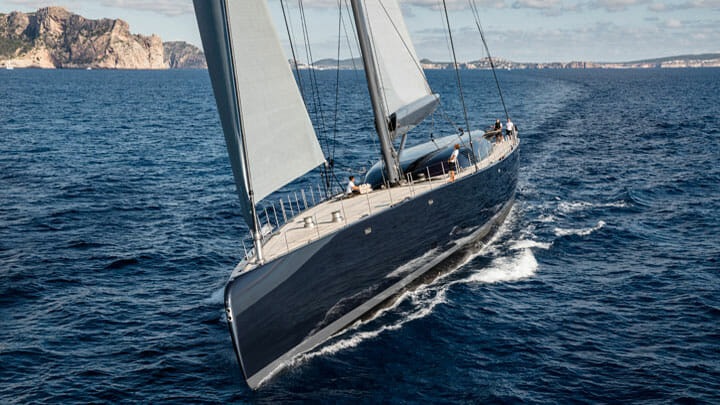 One of the most significant in this regard is the sculpted styling. The late Ed Dubois of Dubois Naval Architects gave Ngoni a plumb bow and terraced aft deck. More so, he gave her a strikingly elegant reverse sheer that’s hard to miss, shown off particularly well in the photo above. (In sum, reverse sheer means greater width amidships or even forward than aft.) On an interesting side note, Dubois admitted that his first drawings were, essentially, just okay in the owner’s opinion. He compelled the designer to do more—the results seen here, combined with the reverse sheer transitioning into a concave sheer aft. 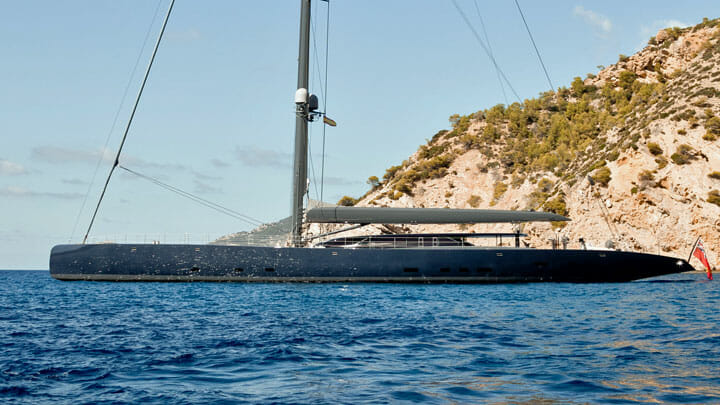 This profile photo above gives you a better idea of that transition’s effect. As experienced as the Dubois and Royal Huisman teams were, they learned something quite impactful as a result of the reverse sheer. It reportedly bolsters the hull’s strength by 12 percent. In addition, it augments load resistance reportedly by the same percentage. Furthermore, the concave shape benefits visibility in the cockpit. 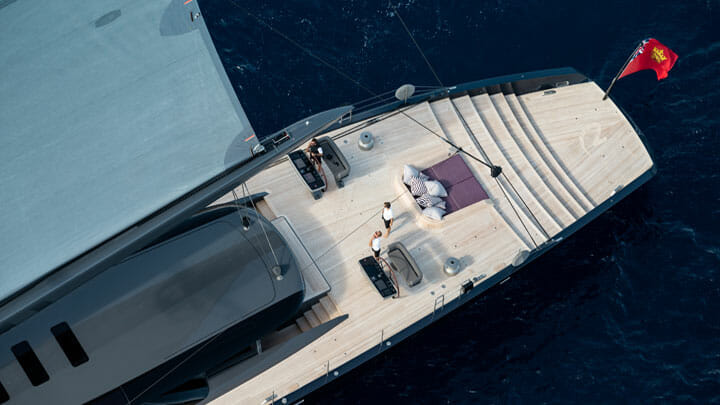 Ngoni’s owner doesn’t just plan to sit and enjoy the ride in the cockpit, though. He’s a hands-on sailor, taking the wheel himself at times. He also likes to feel the yacht’s 17-knot hull speed while he’s steering, and wants steering light to the touch. The combination meant a high-aspect-ratio rudder along with a manual, not power-assisted, system. It was a tall order, given the square-top mainsail measures 9,182 square feet (853 square meters). The result: one of the largest carbon fiber rudders on a boat, 75 square feet (6.95 square meters). 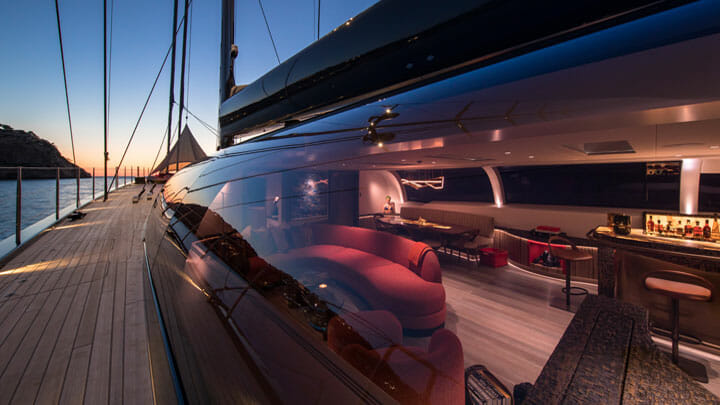 Also quite large, the curved—double curved, at that—ports characterizing Ngoni’s cockpit. Even with technological advances making these possible, they’re still not simple for specialists to make. Neither is the aesthetic effect they lend a mere enhancement, though. Again, it’s another example of how the owner of Ngoni inspired the build and design teams to dance on the edge of possibility. 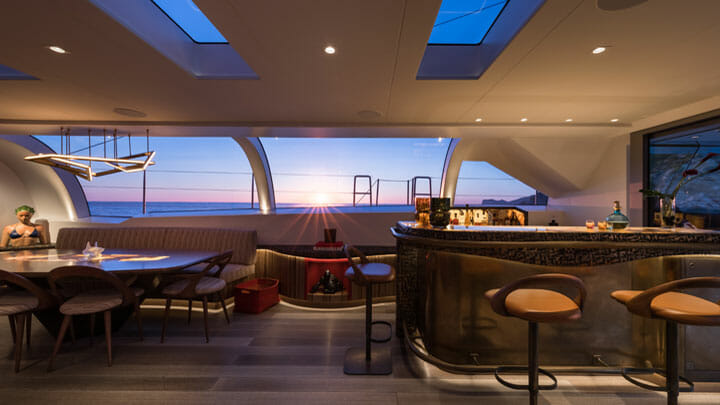 Complementing the big, bold curved glass outboard, Ngoni has four long skylights overhead in the cockpit. She also has an anything-but-traditional decor, as the cockpit hints. Rick Baker Ltd., a London studio known particularly for furnishings, collaborated with the owner in creating a rich, colorful, and yes, creative ambiance. Curves come in abundance, as do unusual materials mixed with marbles and woods. 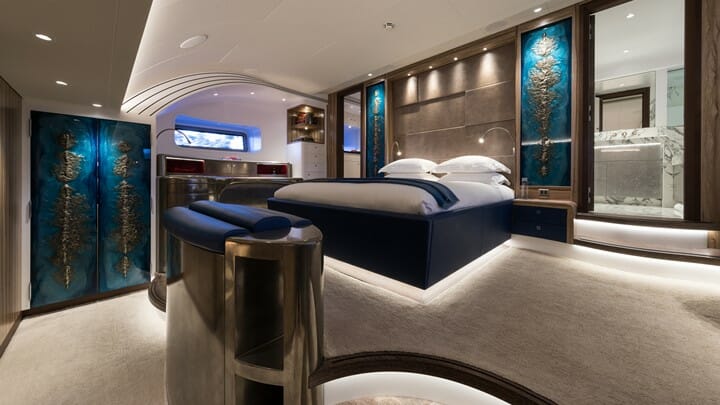 The owner’s stateroom is the ideal display case for those curves and colors. It’s full beam (31 feet, or 9.54 meters), too. This two-level affair has a vaulted ceiling, with detailing outboard calling your attention to it even more. The turquoise panels to each side of the bed and on the doors on the lower level are custom made, of resin. What you can’t see, though, is an adjacent, equally curvy study, containing its own head. Nor can you see the owner’s gym, which has a fold-down platform for open-air workouts. 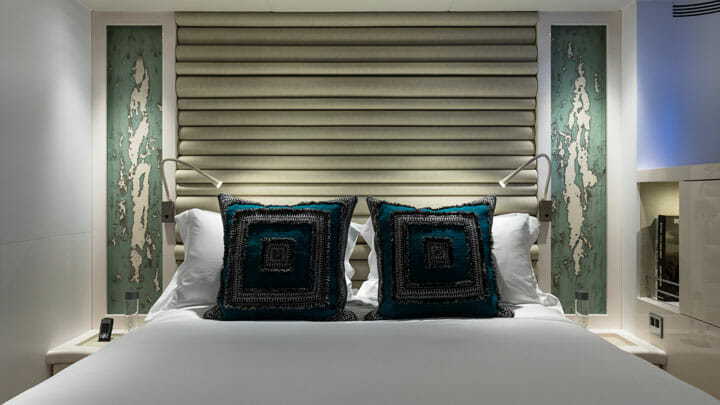 The owner insisted each area aboard Ngoni “retain its own design identity,” Rick Baker says. Of course, this didn’t preclude using similar materials throughout. The bedside panels in this guest stateroom (one of just two aboard, by the way) are resin, just like the master suite’s panels are. “The use of vivid resins, combined with sculpted metal surfaces, was to give an overall fluid feel throughout,” Baker explains.

Every custom project, whether a motoryacht or sailing yacht, starts with a singular vision. The owner of Ngoni didn’t just have a vision; he had dogged determination. More important, he believes he brought together equally dogged engineering, design, and construction minds to lern together, and to make it happen.