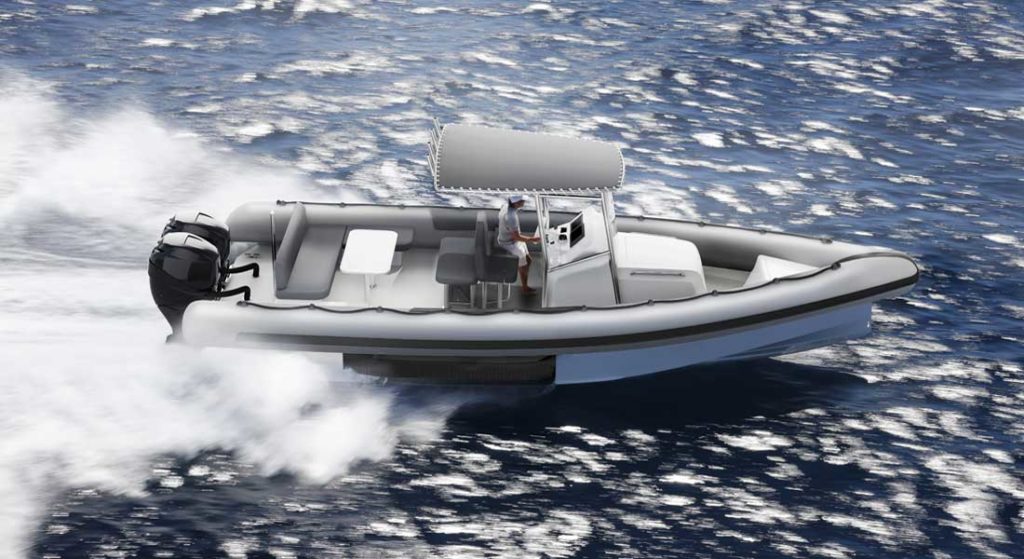 Over the past decade, Iguana Yachts has turned a lot of heads with its amphibious boats. The founding principle was to enjoy boating without having to trailer a craft, anchor out, and/or find a slip. Thus the Iguana range of five different series was born. But, each of those series carries a six-figure price tag, plus little luxuries like refrigerators and high-end sound systems. Some customers like the amphibious concept but wanted something more utilitarian, and therefore at a lower price point. This led to the Iguana X range, the first of which is the Iguana X100 RIB.

Waterfront property owners without docks and/or impacted by tidal constraints are the primary target buyers. However, Iguana Yachts realizes some yacht owners still prefer RIBs, too. And, let’s face it, an amphibious craft is just plain fun. The 33-foot (10-meter) combines the advantages of a rigid hull, Hypalon tubes, and of course Iguana’s amphibious tracks. Those tracks fold away into the hull when you cruise, and deploy at the press of a button when you’re heading to shore.

With a 12-person passenger capacity, the Iguana X100 reportedly can transition to shore regardless of the terrain. The tracks should stand up to mud, soft sand, and even rocks. On a related note, the company designed the tracks to leave marks akin to that of human footprints, so the boat won’t destroy the environment. Uneven shorelines shouldn’t be a problem, either. Iguana Yachts says the tracks can tackle straight 29-percent inclines, and depending on the beach slope, up to a 45-percent incline. In addition, Iguana Yachts has engineered the RIB to go from sea to shore even if waves are kicking up to about four feet (1.2 meters).

Because buyers still like having options, Iguana Yachts created a few packages for outfitting the Iguana X100. The Comfort Pack, for instance, offers L-shaped seating with backrests, along with a freshwater shower. It also puts height-adjustable helm seats and twin rear-facing seats aboard. The Fishing Pack, meanwhile, adds in rod holders, a fishbox, and raw-water washdown. Then there’s the Electronics Pack, adding a fishfinder and several other units to the helm suite, along with a sound system.

Individual options exist, too. They include some of the items just mentioned, like the shower and stereo, as well as a T top.