You are here: Home / Yachts / Motoryachts / Latona, by CRN: Megayacht News Onboard 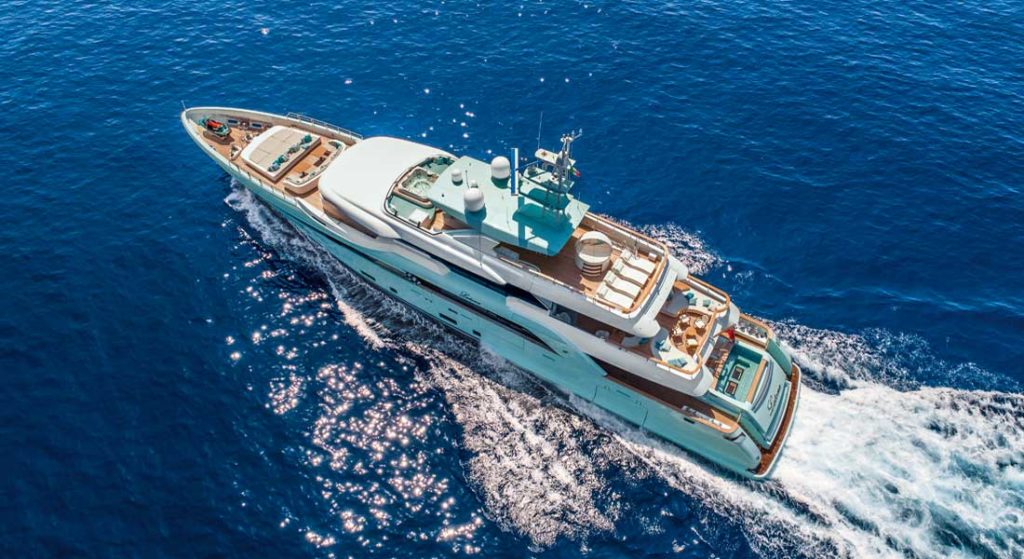 Two to three decades ago, the “gentleman’s club” was a common interior theme for megayachts. Picture a sumptuous atmosphere, with mahogany paneling and rich colors. In more recent years, the casually chic “floating beach club” has become the preference. There’s always an exception to the rule, of course, and the owner of Latona is a significant one. From the styling to the interior design, his CRN harkens to earlier times. Simultaneously, though, Latona incorporates modern megayacht amenities. 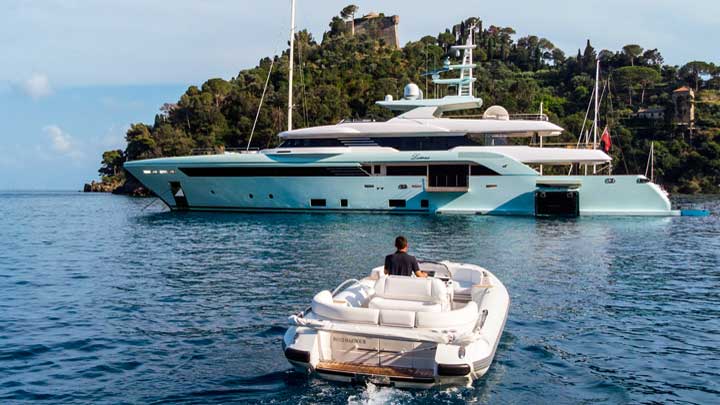 The 164-footer (50-meter) sets you straight as soon as you see her. The turquoise paint scheme, carried up to her navigation mast, conveys that the owner had a distinct vision. He wanted to play off the ocean and the sky, in a way that the paint tone would change subtly depending on where he was cruising. In addition, the paint calls attention to the styling, by Zuccon International Project. The look is at once contemporary and classic. The design studio incorporated significant aspects of the Superconero era of CRN. During the 1960s, CRNs had sharp bows and pronounced aft areas. 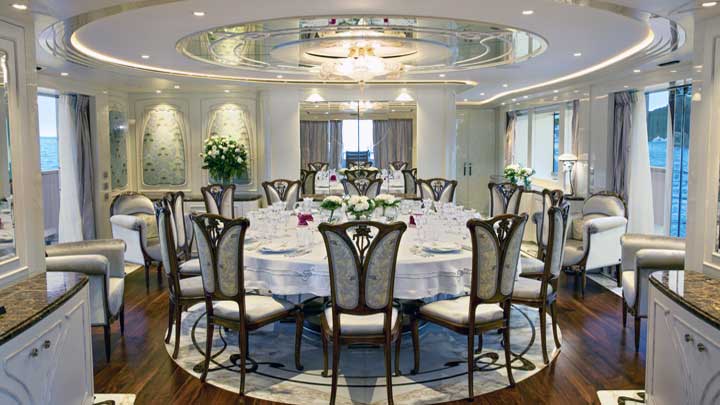 The owner is a loyal Ferretti Group customer, having started with a 33-foot Riva and then a larger Ferretti Yachts model. Both offered a chance to personalize the boats, but neither was custom. Therefore, the owner relished the chance to really make Latona the way he likes to live with his family and entertain. In yet another example of harkening to an earlier time, Latona thoroughly embraces what’s termed the Liberty style. It’s the version of Art Nouveau popular in Italy through the early 20th century. Therefore, from floors to furnishings and even doorknobs, the megayacht is rich in these details. Indeed, CRN’s in-house team and Zuccon International Project extensively studied the period for authenticity. 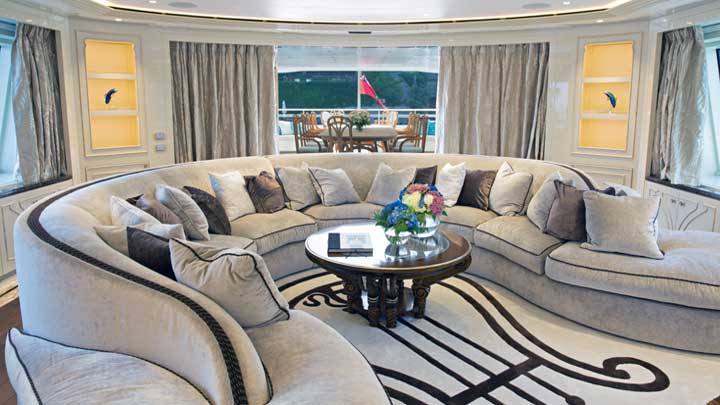 The lyre pattern in the upper-deck lounge’s carpeting is faithful to the period, for example. So, too, are custom-made Murano lamps onboard, with flower and leaf patterns. The walnut panelling, with a silvery pickle finish, includes boiserie, a sculpted treatment with fabric insets. Underfoot, every room has a common theme curving and looping along walls. A rich brown inlay, whether in stone, wood, or fabric, is akin to a skilled seamstress’ stitching. 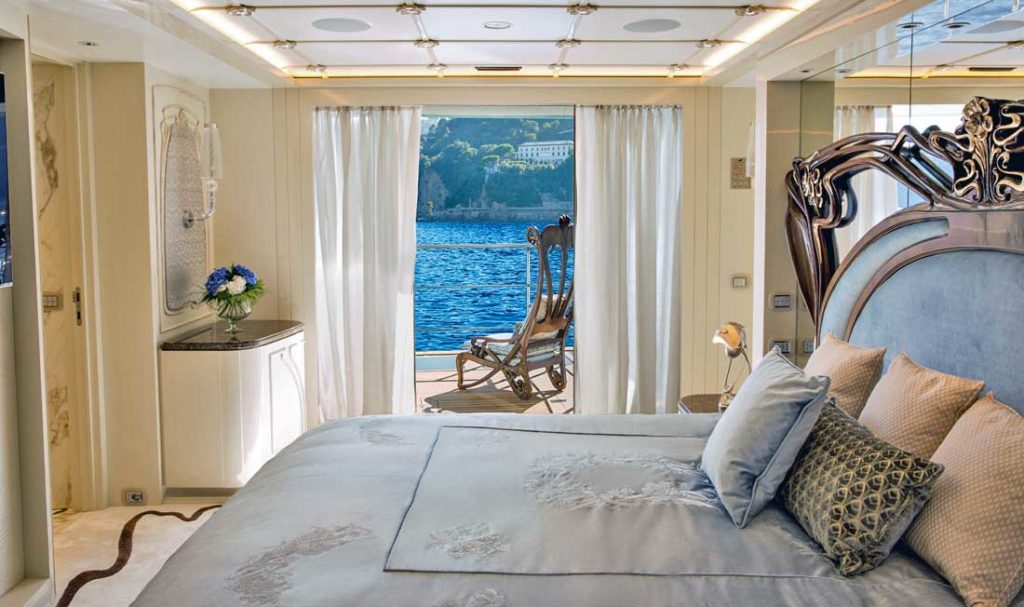 Even with the rococo period details, Latona remains true to modern megayacht living. The master suite, for instance, has a fold-down balcony. There’s a second balcony, too, in the master, a sort of smoking lounge with an opening window. Because the owner has small grandchildren, one guest stateroom has delightful bunk beds. In the beach club (below), meanwhile, the grandkids can have a blast when the drive-in tender is out. The floodable bay becomes their own indoor swimming pool. The grown-ups can enjoy drinks and each other’s company in the adjoining lounging area. 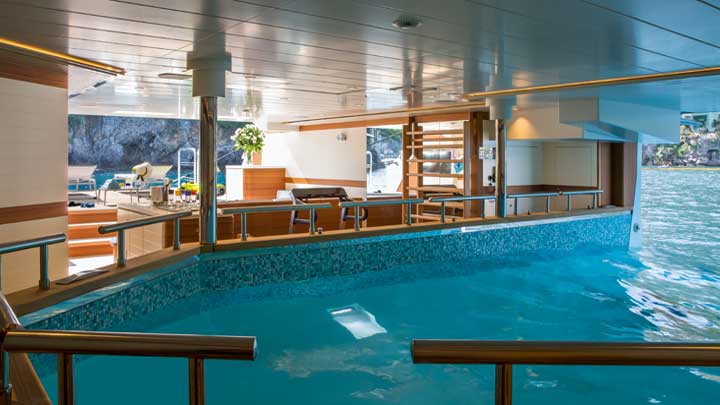 With a 30-foot (9.2-meter) beam, Latona is a spacious, floating respite for her owner and his family. She may seem decidedly formal, but like any good woman, she knows how to let her hair down. In true yachting style, she carries watertoys, but also something special. The owner decided close to delivery that an inflatable slide would be terrific fun for the kids to enjoy. With the yacht nearly done, though, stowage was the question. The solution: CRN created a raised sunbed on the sundeck to conceal it.

It certainly isn’t Liberty style, but it definitely is liberating.