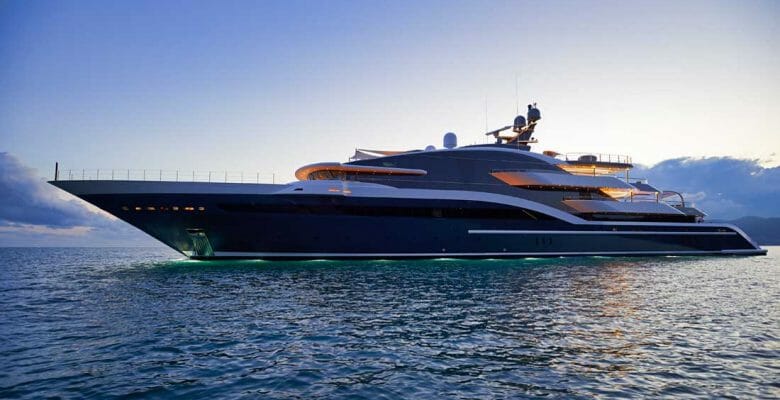 Delivered 33 months after her keel laying, DAR (her name is an acronym) is more than a remarkable achievement in yacht design and construction. Her imposing, black-and-white, 295-foot (90-meter) LOA certainly gets people talking. So, too, does the common design thread, inside and out, of inspiration from nature. The story behind DAR goes much deeper, though. She is the embodiment of a common spirit, shared by the owner, stylist Luiz De Basto of De Basto Designs, interior designer Nuvolari-Lenard, and builder Oceanco. That spirit: strive to achieve the extraordinary.

Interestingly, DAR started as a concept by De Basto. When he showed it to Oceanco, “They said, ‘Let’s take it to the next level,’” he explains. That meant engineering her, with Azure Naval Architects, for performance, a reported 20 knots under twin 4,828-hp MTUs. It further meant proving her abundance of glass—4,306 square feet (400 square meters)—was indeed structurally possible, among other things. “My initial drawings may have looked like a futuristic concept, but it’s actually the result of a perfect integration between interior layout and exterior design,” he explains. 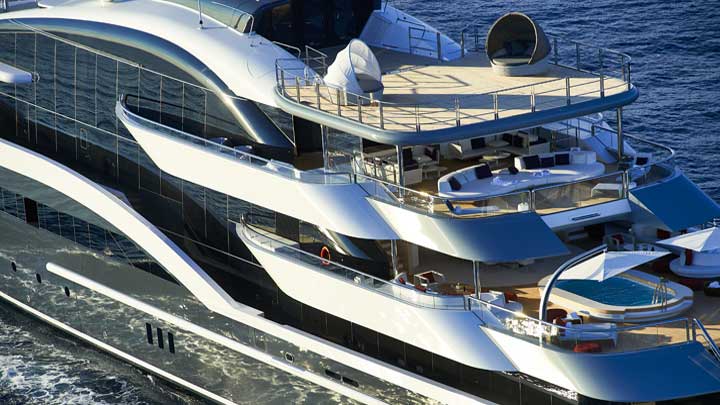 Clearly, the owner agrees. According to De Basto, a few years ago, Oceanco showed the design to the owner’s captain. Thirty minutes after the captain sent it to his boss, “they called Oceanco,” he says. While ultimately, of course, the owner did request changes, “it’s rare that you hit nearly every mark for a client with your own design,” he continues. In fact, “this owner felt the design ticked essentially every box.” 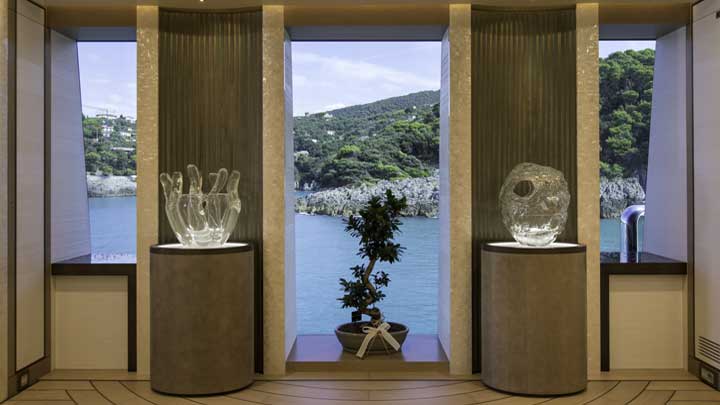 One of those boxes is the above-mentioned abundance of glass. While floor-to-ceiling glass is essentially everywhere these days, DAR takes it further. Inside the skylounge (above), for instance, it’s truly the entire wall. No framing, no mullions. It seems as if the glass adheres directly to the superstructure. Elsewhere, what appears from outside to be painted black surfaces is actually black glass (second photo from top)—completely transparent from inside. Oceanco even created a full-size mockup of this black glass for the owner and his wife, who was skeptical, to make sure they could see. (On a related note, some surfaces truly are painted. “I challenge you to find them,” De Basto says. The subcontractors “did a very, very good job.”) 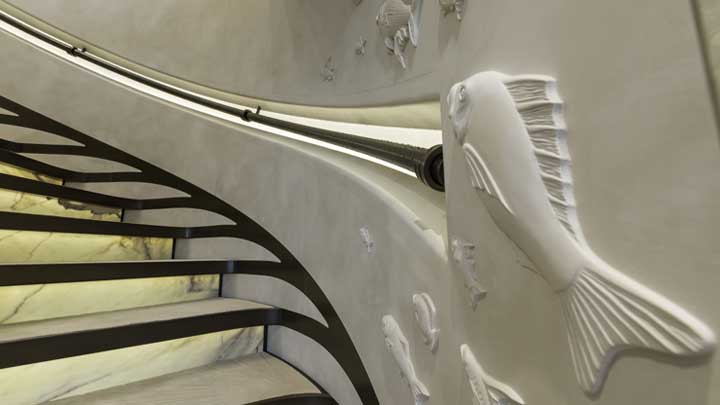 As much as enjoying the natural world beyond the glass was important, so, too, was bringing the that environment inside, thematically. DAR’s main entry (above) provides guests with their first hint of what awaits. Valentina Zannier of Nuvolari-Lenard transformed the owner’s vision into small schools of fish swimming up and down the central stairway. Nearby, olive trees and leaves, also in relief detail, adorn walls, too. Paint, suede, leathers, glass, metal; numerous materials, hand-crafted by equally numerous artisans, form flora and sea life throughout DAR. 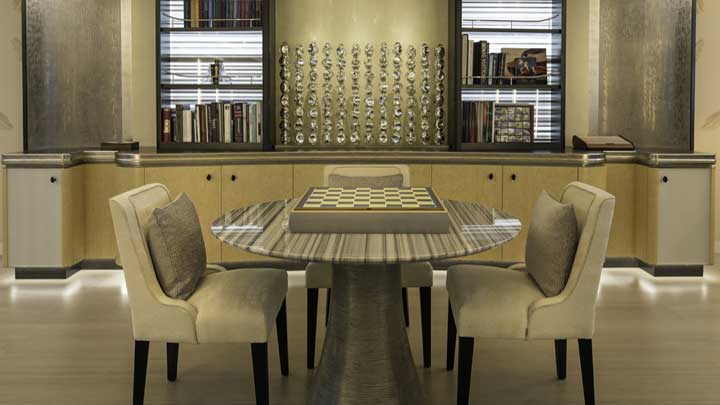 With a 46’6” (14.2-meter) beam, accommodations for 14 in the owner’s party and 31 crew, plus a gross tonnage of 2,926, DAR could feel overwhelming. Thankfully, the owner’s vision and the design teams prevent that. Even given the megayacht’s dedicated, private owner’s deck, including significant alfresco space, the master suite is cozy. Lounges flow similarly, with intimate games areas (above), bars, and more. To be clear, a party of 14 spread across settees is still large. However, nothing about DAR’s design looks or feels all-consuming. 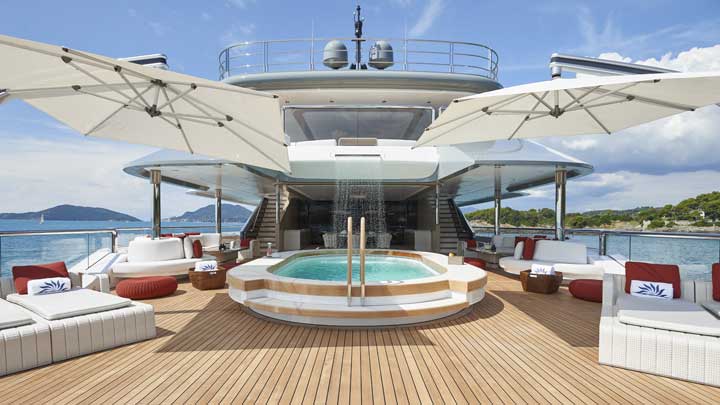 While a stairway allows family to come enjoy a rotating C-shape settee outside the master suite (an engineering feat, designed by De Basto and executed by Oceanco), the skylounge’s aft deck is the main place to be. With a waterfall pool (above), it’s additionally ideal for shaded dining. Note the umbrellas. De Basto even designed the bases, which follow the curve of the aft portion of the deck. Furthermore, the crew appreciates that they’re not bulky, plus constructed of lightweight carbon fiber. 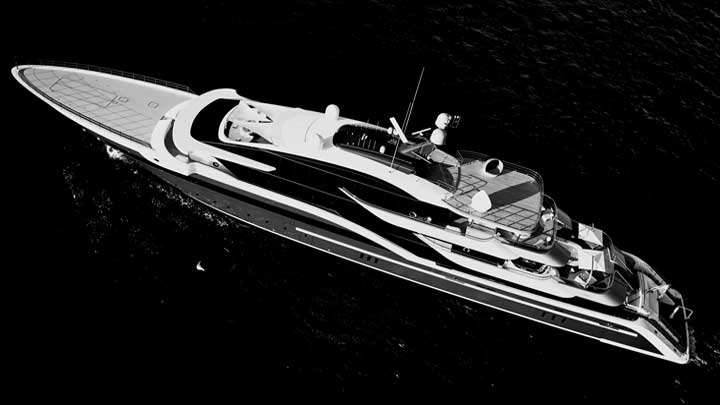 The “perfect integration between interior layout and exterior design,” as De Basto mentioned, is perhaps best appreciated from an aerial view. DAR carried the name Project Shark during construction because from her wing stations forward, she resembled a hammerhead shark. An abundance of organic shapes characterize her, too, creating a coherent fluidity. This, even with the request of a helipad by the owner, one level above the owner’s deck. Sometimes, megayachts look one way outside and radically different inside. DAR does not. Bio-design unites her from bow to stern and top to bottom.