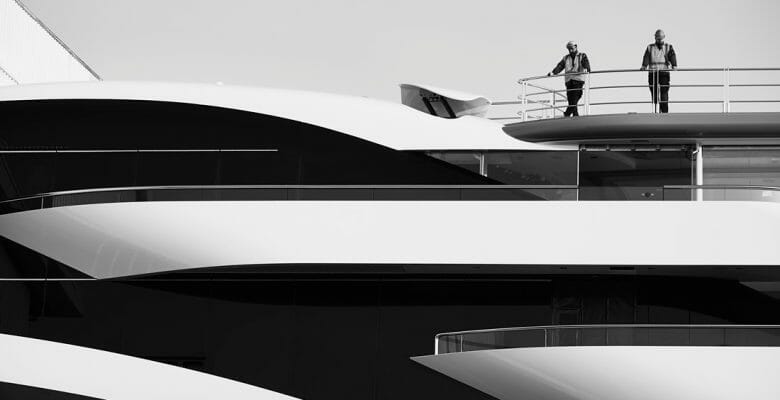 Dar is the real name for the daring-in-design Project Shark from Oceanco. And, according to the yacht spotters from the social-media platform Dutch Yachting, Dar did a healthy 20 knots while returning from sea trials on Monday. What’s more, Oceanco confirms it has handed her over, and is revealing more details.

The superyacht is healthy herself in size, measuring 295 feet (90 meters). With styling by Luiz de Basto Designs, the then-known Project Shark slipped into view in February. Oceanco now says the code name resulted from her aerial appearance. Specifically, from overhead, the wing stations make her look like a hammerhead shark. Not coincidentally, the mast profile shape resembles a fin, too.

Oceanco previously confirmed Dar’s beam is nearly 47 feet (14.2 meters). It also confirmed she packs a power punch below decks, twin 4,828-MTU diesel engines. Newly revealed, however, is the official top speed. The clip at which the Dutch Yachting team observed her, 20 knots, is it.

Furthermore, the shipyard is finally elaborating on the interior design by Nuvolari-Lenard. For instance, due to the above-mentioned glass, Dar provides enviable views to each side as well as aft. The glass, by the way, is reflective, for aesthetics and, likely, privacy. Another feature finally now public: an entire deck for the owners. The upper deck, deliberately without walk-around side decks, is theirs. For alfresco enjoyment up here, they have balconies as well as a hot tub forward. Throughout Dar, lighter-tone woods such as sycamore with fiddleback grain appear. So, too, does an abundance of maple, bleached to look gray. Wallpaper, 3D lacquer (sure to be a tactile experience), cut leather panels, and metallics cover additional surfaces. In addition, the decor incorporates Mother Nature-oriented themes like cascading blossoms, feathers, fish, and waves.