You are here: Home / Yachts / Motoryachts / MLR Makes a Splash at Delta 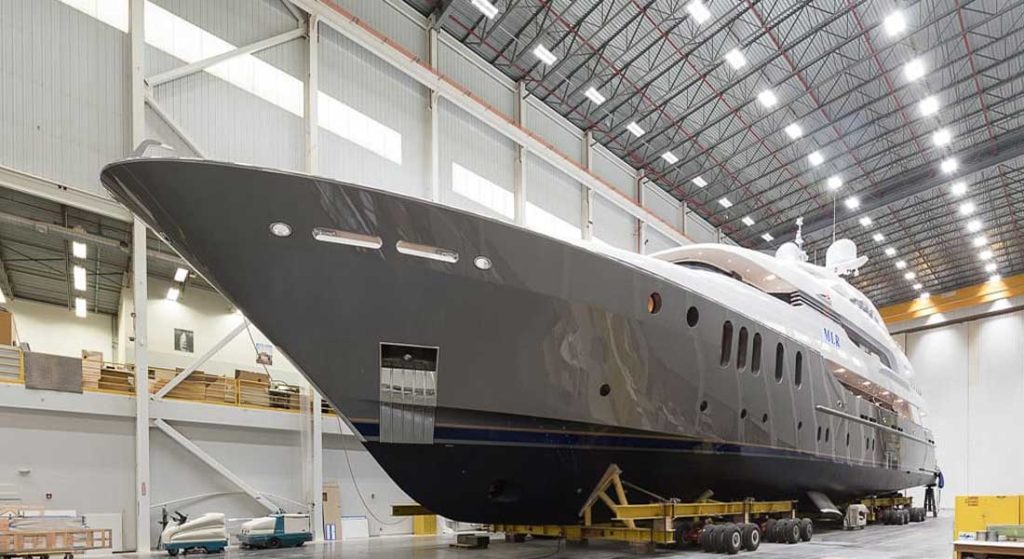 It was a busy weekend in Seattle. MLR maneuvered out of her final assembly building at Delta Marine on January 20, launching on the 21st. She’s the builder’s first launch of the year.

With interior design and exterior styling by JQB Design, the megayacht measures about 175 feet (just over 53 meters). Among the reasons why the owners selected the studio, based in Seattle just like Delta is: they liked the looks of Silver Shalis. Jonathan Quinn Barnett, chief of JQB Design, styled that yacht in conjunction with Langan Design Partners. On a related note, Silver Shalis, the same LOA as MLR, saw delivery from Delta in 2010.

As for choosing Delta, the owners, from the United States, were intent on building their boat stateside. Furthermore, they appreciated how the shipyard combines aluminum hulls with fiberglass superstructures for some of its projects.

MLR was announced in October 2016 as the somewhat confidential Project 174046. Among the facts that Delta kept quiet were the name. However, it did reveal some interesting highlights. For instance, MLR conceals elevator access and a day head in her mast. The crew, of course, has access to the topmost deck, too, via a stairway leading from the pilothouse. Because the owners and their guests like to dine outside, the megayacht has dedicated alfresco eating areas as well as bars that can serve as secondary dining spots. In fact, every deck aboard MLR has a bar. Among those bars, the sundeck’s should be spectacular. Clad in teak, it’s 13 feet (about 4 meters) long, accompanying the pool.

Speaking of the pool, it’s not just a simple hot tub. While it does have hydrojets, it further has a waterfall spilling down into it, forward. It also has what Delta describes as a “sunning beach,” a shallow section for lounging. Considering sunpads and ample seating round out the sundeck’s features, this whole area should see lots of use.

MLR, seeing delivery in several weeks, will take her owners and guests—12 people total—to destinations such as the Bahamas and the Caribbean.