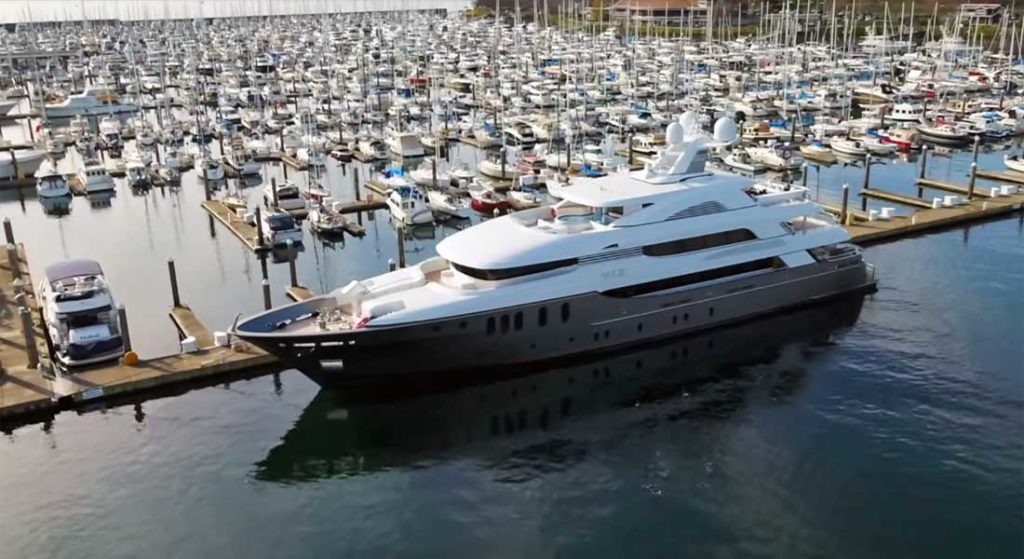 A 175-foot (53.3-meter) megayacht can stand out even among other megayachts. But when she towers above essentially everything else in a pretty packed marina, she looks extra-special. As you will see in this edition of our Sunday superyacht video watch, Delta Marine’s MLR dwarfed the rest of the boats in the popular Elliot Bay Marina in Seattle in recent days.

Just up the road from the shipyard itself, the marina allowed the megayacht’s designer, Jonathan Quinn Barnett, to capture a variety of aerial looks at her. Not only does the video show off her lines, but also provides a nice look at some of her alfresco features. For example, the aft deck on each level will cater to dining in the morning sun or under the stars. Some dining areas can accommodate 14 people, too, even though Delta Marine’s MLR has staterooms for 12.

Another attractive feature onboard is the sundeck pool. It isn’t filled with water in this footage, and therefore the hydrojets it additionally has aren’t activated. Nevertheless, this pool will further have a waterfall cascade into it. If that doesn’t convince guests to make the sundeck a priority for relaxing onboard, it’s hard to imagine what else will.

MLR splashed at Delta back in January, representing the shipyard’s first launch of the year, too. She represents yet another source of pride as well. The owners, who are American, wanted to build their megayacht on U.S. soil. They also took note of how Delta is equally comfortable with metal and composite construction, particularly in offering large megayachts with aluminum hulls and fiberglass superstructures.

Delta Marine’s MLR should see delivery quite soon, with destinations such as the Bahamas on the must-visit list.