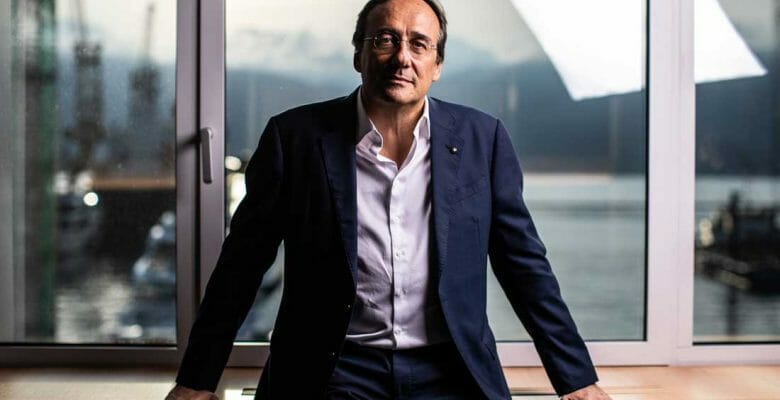 During the global recession, some shipyards took on investors. Sanlorenzo was one such builder, selling a percentage of ownership to a foreign company. Massimo “Max” Perotti (pictured), the yard’s chairman and CEO, recently bought back those shares. As a result, he and his family currently own all but 4 percent of Sanlorenzo’s shares.

In 2013, Sanlorenzo signed an agreement with Sundiro Holding Company, a public Chinese company that produced Honda motorcycles. It was a joint venture to produce powerboats to 66 feet (20 meters) in China, bearing Sundiro’s name and Sanlorenzo’s design. In addition, the intention was to sell Sanlorenzo’s Italian-built yacht and megayacht models throughout China, Hong Kong, Macao, and Taiwan. While Sundiro gained 23 percent ownership of Sanlorenzo, Perotti retained 55 to 56 percent, “so that the company’s control, as well as the production, will remain in Italy,” he stated at the time.

According to Reuters, Sundiro announced in December 2018 that it would sell its stake, for 22.8 million euros ($25.89 million at the time). The company also said it would not hold any Sanlorenzo shares after the sale. A few days ago, Perotti informed to Italian media that the sale had concluded.

Sanlorenzo has officially elaborated on details, too. It confirms that Perotti has reacquired the 23-percent stake from Sundiro. Furthermore, it states that the Perotti family reacquired an additional 16-percent stake a few months ago, from another prior shareholder. That was Fondo Italiano di Investimento, a private-equity company, which purchased its minority holding in 2010. The Perotti family—including Perotti’s children Cecilia and Cesare—now owns 96 percent of the company, through the company Happy Life Holding. The rest of the shipyard management, meanwhile, owns the remaining 4 percent.

In an interview with the Italian newspaper La Stampa, Perotti says Sundiro approached him a few months ago about a buy-back. A few reasons led to the request, he says. First, Perotti tells the newspaper, boating in China “did not take off.” Second, he states, the president with whom Ihe signed the agreement left Sundiro, and his replacement wasn’t interested in yachts as a business line. And, finally, “Sundiro is in a liquidity crisis and was interested in making cash.”

Overall, Perotti says Sanlorenzo no longer needs the financial assistance from the prior shareholders. He claims revenue grew to 380 million euros in 2018, a rise of 80 million from the prior year. What’s more, he projects 20-percent growth for this year, and points to a backlog of orders through 2020. Related to this, Sanlorenzo intends to invest in new facilities through next year to boost production capacity, plus invest in new models. On another related note, Sanlorenzo is creating a youth-training program, Sanlorenzo Academy. The goal is to fill in-demand jobs in the marketplace.