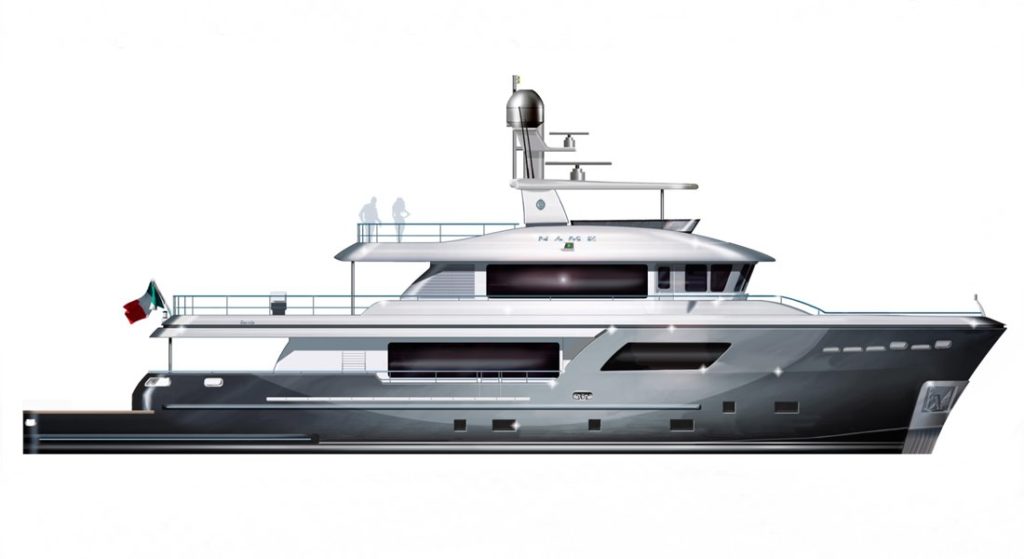 Over the past nine years, Cantiere delle Marche has sold its explorer yachts in Europe, Russia, and Latin America. The United States has been on its proverbial radar, with a marketing strategy reserved for rollout this year. Fittingly, a U.S. customer has already come forward. The first American-owned Cantiere delle Marche, a Darwin 106, is set for delivery in 2021.

The explorer megayacht follows the naval-architecture and systems platform that prior Darwin projects feature. These include deliveries like Galego, Babbo, and Storm. Each has set off on global travels on her own bottom. In addition, each features a steel hull, versus the more common fiberglass for this size range, with thicker plating than customary. Two independent rudder are onboard, too, typical of commercial ships—an approach Cantiere delle Marche deliberately took since its founding in 2010.

Of course, the first American-owned Cantiere delle Marche has custom design features, too. Andrea Armas of Azure Naval Architects has been working with the owner to create a cockpit ideal for fishing, for instance. The lazarette contains stowage for fishing-related gear as well. In addition, the owner wants to enjoy a country kitchen, for a more comfortable, casual ambiance. Finally, the master suite sits aft on the upper deck, replacing the skylounge.

The shipyard intends to reveal more details following the early stages of construction. In the meantime, Vasco Buonpensiere, the builder’s co-founder and sales and marketing director, says the sale fit with the yard’s analysis of the U.S. market. “As markets mature, customers get picky, and the American owners definitely know what they want,” he says. “The owner of this Darwin 106 has a great deal of experience in yachting, and is assisted by a highly experienced team.” It proves, he adds, that Cantiere delle Marche’s emphasis on voluminous, robustly built and engineered yachts has gained more recognition stateside.

On a related note, Cantiere delle Marche feels confident it will sign a second contract with an American customer soon.