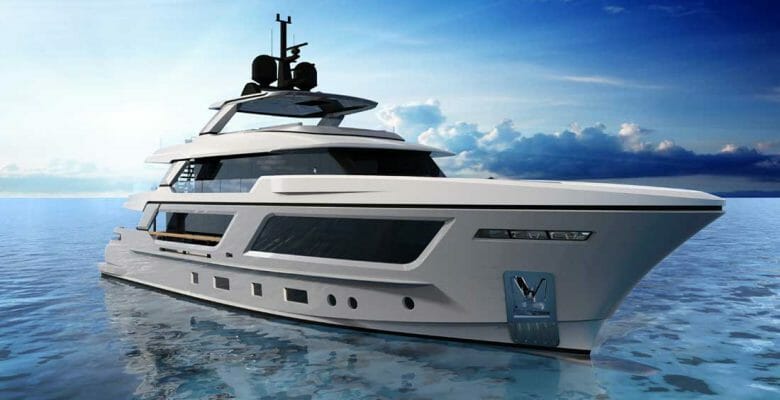 At the start of 2019, Cantiere delle Marche turned its sales and marketing attention toward the United States. The effort is paying off, with the yard signing its third yacht, an MG115, to a client from this country. The 115-footer (35-meter) is just one of a few explorer designs created with Francesco Paszkowski Design.

Indeed, the MG series with Paszkowski already includes one yacht in build, the MG129. The MG series additionally includes the MG147, which Cantiere delle Marche says has attracted interest among buyers. In fact, Vasco Buonpensiere, the co-founder and sales and marketing director, anticipates having a contract finalized before the end of the year.

As for the MG115, “We have worked extensively on this project for months with Francesco,” Buonpensiere says. She shares strong lines that communicate her explorer purpose, yet also has soft styling. He asserts that the MG115 is not an explorer in name only, either. “Throughout the years, we have showed the market that we are able to build true explorers that have both elegance and style of a white yacht,” he continues. In fact, this yacht should see a 5,000-nautical-mile range under Caterpillar power at a little less than her 12-knot cruise speed. The owners and their family plan to travel remote regions of the world. With naval architecture by Hydro Tec, the steel-hulled yacht additionally meets current EPA and IMO emissions standards.

Although full feature details are not yet public, the MG115 will have what Cantiere delle Marche calls “the invisible crane.” It’s a davit that tucks into the superstructure. In addition, five staterooms are aboard, with the master sitting on the main deck. With a beam of 24’6” (7.5 meters), the yacht should feel plenty comfortable as well. This includes the sitting and dining areas aft on each deck. For the convenience of the captain and five-person crew, the MG115 situates all external stairways to port, plus wide side decks.

More details about this 283-gross-ton megayacht as they become available.