You are here: Home / Builders / Jackpot, Last Christensen to Be Completed in Washington State 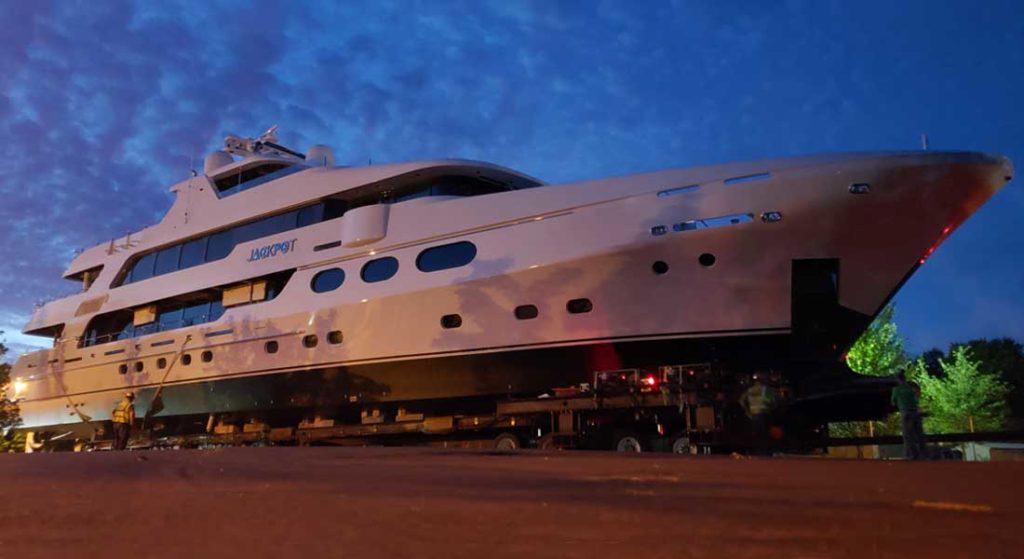 New Jersey is home to Atlantic City, where several casinos line the beachfront. Two New Jersey residents well versed in cruising may feel they’ve hit the jackpot, all the way across the country. Their new 164-footer (50-meter), Jackpot, launched last week at Christensen Shipyards. It was a bittersweet occasion, since Jackpot represents the last megayacht constructed at the yard’s Washington State facility. All future builds will take shape in a new shipyard in Tennessee.

Christensen Shipyards opened its doors in Vancouver, Washington in 1986. Earlier this year, though, Christensen announced plans to move operations to Tennessee by the summer. The new yard, a purpose-built facility, was in the works for many years, for yachts to 225 feet (nearly 69 meters). By contrast, the Vancouver site can only accommodate yachts to the 50M Series, like Jackpot. Situated in Tellico Lake, the Tennessee yard has 450,000 square feet (41,806 square meters) of manufacturing space, plus 13 construction and finishing bays. Overall, it’s more than twice the square footage of the Vancouver yard.

Additional factors made Tennessee the future choice for Christensen Shipyards. Builders like Sea Ray have been in the state for decades, therefore providing skilled labor. Tellico Lake is 20 minutes from Knoxville, which has a major airport. The lake leads to the Gulf of Mexico via several locks and dams, too. In fact, Christensen says yachts can reach the Gulf from the yard in less than 10 days. Compare this to the far longer time it takes to depart Washington State and transit the Panama Canal for popular East Coast destinations. It could be a month, if inclement weather occurs. 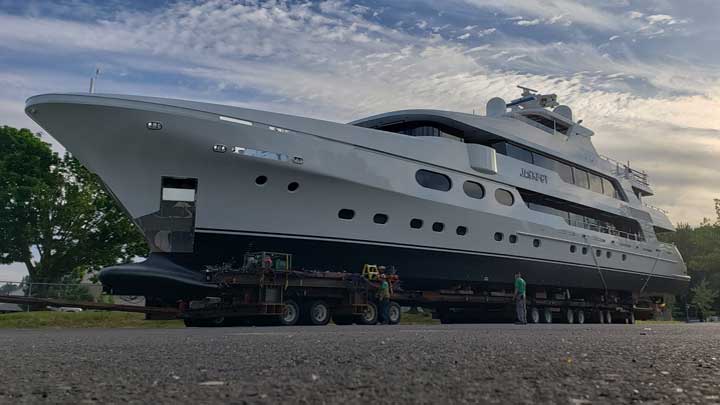 Interestingly, Christensen won’t limit itself to fiberglass construction in Tennessee. It may explore steel, too. “This is a huge step for us, but also for American yacht building, which has been in steady decline for the last two decades,” asserts Henry Luken, Christenen’s owner. “In our new range we can now compete with any builder in the world in both price and quality, and unlike our existing facility, we can offer yachts virtually unrestricted in beam.”

Vigor Industrial, which constructs vessels for the U.S. military, will occupy the Washington site following Christensen’s departure. A formal sale is pending, plus Jackpot still has some finishing work to do there. Following sea trials in the Pacific Ocean, she’ll make her way to the U.S. East Coast. One more partially completed project is still on site, too. Hull 42, the same size as Jackpot, will not remain there long, however. The customer who acquired her is taking possession next week, for completion at an undisclosed yard.

The Tennessee shipyard could see a contract soon. The owner of Chasseur is interested in a new 50M Series, for instance, according to Christensen. Other clients are reportedly in talks for projects as well.