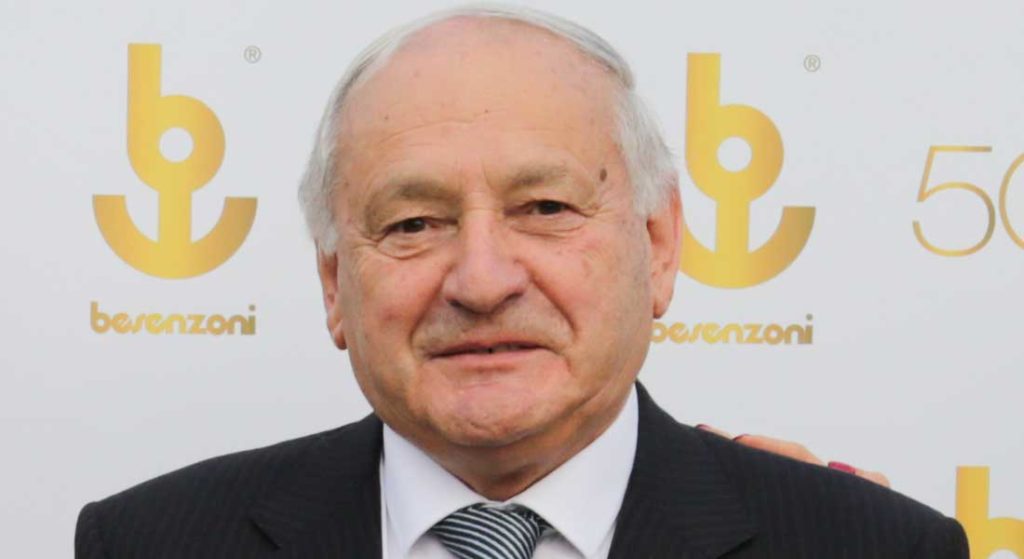 Giovanni Besenzoni, the Italian entrepreneur behind the eponymous brand of yacht and megayacht accessories, died on August 11. He was 77 years old.

Born in northern Italy’s Sarnico, Giovanni Besenzoni worked in a small shipyard in the area starting at age 18. He rose through the ranks to become a foreman. When the shipyard went bankrupt in the 1960s, he decided to start his own business. Besenzoni hung its shingle in 1967, in Sarnico.

The company was small at first, serving as a third-party supplier of handrails, windshields, and other products. While it also had just one location, it introduced truly innovative products. For example, in 1973, the Besenzoni company created a swim platform with a ladder, never before seen. By the middle of the decade, Giovanni Besenzoni decided that his eponymous company should present accessories and products under its own name.

It was a wise move. While the manufacturer continued to produce windshields, plus things like tender cranes as well as electric helm seats, its most famous accessory followed in 1985. Besenzoni developed hydraulic passerelles with remote controls. This, too, was unprecedented. Not only that, but the passerelles could double as small tender cranes.

By 1989, the company had expanded its offerings to the point where it needed additional manufacturing space. Giovanni Besenzoni secured a second location in Paratico, near Sarnico and still alongside Lake Iseo. Strong growth continued, with Giovanni’s son Giorgio joining the company in 2000. By the time the specialized Besenzoni Super Yacht Division inaugurated in 2005, the company had earned world renown.

Today, the manufacturer is responsible for more than 170 products. They range from retractable passarelles to tender cranes, electric doors, hydraulic swim ladders and stairs, retractable balconies, awnings, and electrically opening windows. Multiple international awards have resulted, too. The company counts seven manufacturing facilities, still all in the Sarnico region, as well as sales offices in 50 countries. “From a small company to a consolidated industrial, the heart of our work at Besenzoni has remained the same: the man and his craftsmanship,” Giovanni Besenzoni reportedly liked to say.

Today, Giorgio Besenzoni serves as CEO of the company his father founded. His sister Fiorella also works for the company. Giovanni Besenzoni leaves behind another daughter, Alessandra, and his wife Antonietta.