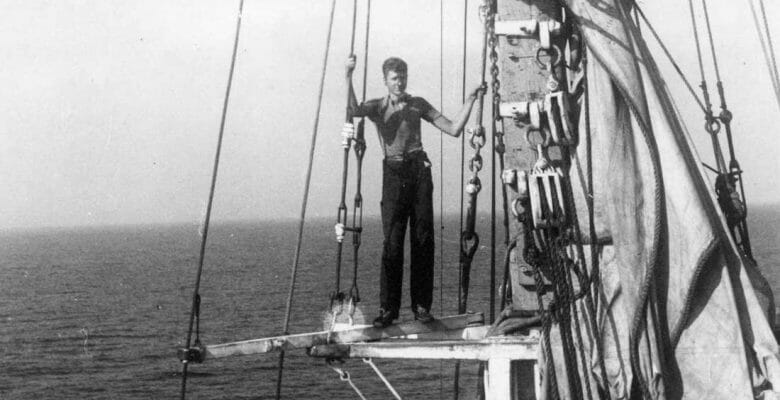 David Fraser, who started Fraser Yachts in the 1940s and grew it into a global powerhouse in megayacht sales and charter, died on January 6. He was 99 years old.

Born in Spartanburg, South Carolina, Fraser developed a love of the water early on in life. In fact, as a young boy, he built a sailboat from wood, from his father’s lumber yard. “There were no plans, and I made the sail on my mother’s sewing machine,” he told Fraser Yachts’ own magazine staff several years ago. “I sailed her across the lake to see a girl I liked, but when I returned the boat had sprung a leak and sank on her maiden voyage!”

As an 18-year-old student at The Citadel in his home state, Fraser signed on as a crewmember for the commercial schooner Anna R. Heidritter (above). The vessel transported lumber and coal along the Eastern Seaboard. Fraser returned to work aboard the vessel each summer until he graduated, too, with an engineering degree. Fraser then served three years in the U.S. Navy, and upon completion of service decided to head west, to California. He landed a job with a small yacht-brokerage firm before hanging his own shingle in 1947, establishing Fraser Yachts in Newport Beach.

By the 1970s, Fraser Yachts had grown to include offices in San Diego and Sausalito, California, as well as Seattle and Fort Lauderdale. Additionally, the firm grew to include not just brokerage but also new construction and yacht charter. In 1993, David Fraser sold Fraser Yachts to United Yachting Monaco, giving his business its first reach into the European market. Remaining actively involved, he ultimately saw his business establish offices in England, Spain, Turkey, Australia, and more global countries.

Even long after he retired, Fraser remained actively interested in yachting. In fact, interviewing him in 2005, the L.A. Times discovered he kept a collection of thousands of nautical magazines and books. Some of them dated back more than 200 years, too.

“David was a titan in the world of yachting and brokerage who touched the lives of many over his long career,” says Raphael Sauleau, Fraser Yachts’ CEO. “He was quite the guy, as many would have said! He loved the business of yachting and leaves behind him a legacy of talented sales brokers, all with the same sense of integrity and business values as his.”

Furthermore, Fraser earned a reputation for making his firm feel like family. His family even got involved in the company, specifically through his two daughters. One of them, Diane Fraser, remains on staff today, having first started in the 1980s.

Similarly, Fraser earned a reputation for encouraging women to become yachting professionals. The late Jane Buffington is a prime example, starting as an apprentice in the San Diego office in 1975. She went on to open Fraser’s first Florida office, later earning a partnership with David Fraser.