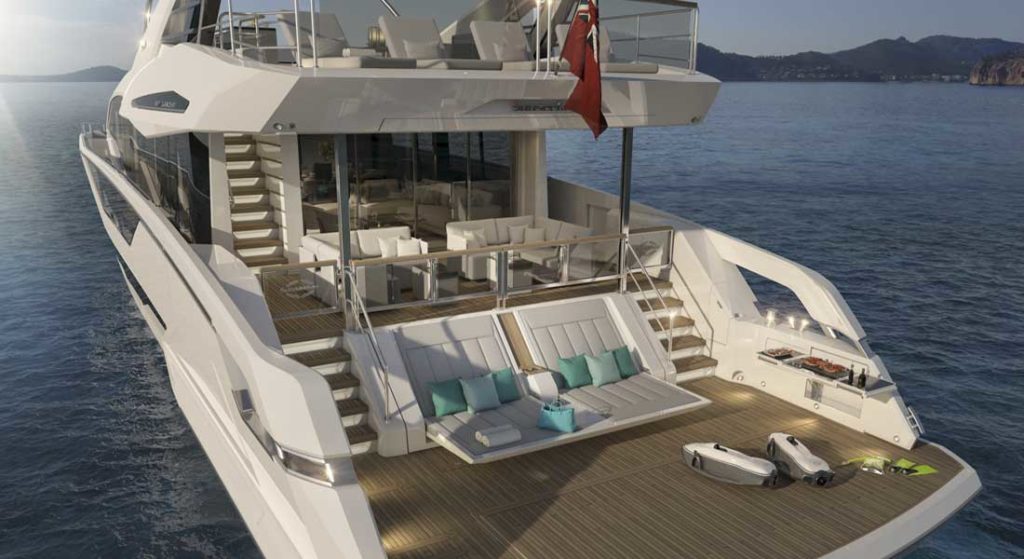 Earlier this year, Sunseeker revealed plans for a new, sportier megayacht model. While it provided a peek at the styling, it kept several details secret. This even extended to the length, which the builder would only say was in the 80- to 90-foot (24.4- to 27.4-meter) range. The secretive model is secret no more: the Sunseeker 87 Yacht. She also heralds the arrival of design features that will roll out on multiple future models.

Announced as Project 8X, the Sunseeker 87 Yacht is 88’9” (27.1 meters) in length, with a beam of 23’5” (7.16 meters). Since the initial reveal back in January, the shipyard’s in-house design department has been fine-tuning the features. The biggest changes occur aft. The recessed transom still exists, but has a raked front, fitted with chaise-lounge-like sunbeds. Sunseeker calls them X-Tend sunbeds, because they extend electrically. They can slide out as shown above, or slide to face the main aft deck seating area. Sunseeker’s CEO, Andrea Frabetti, says you should expect to see the X-Tend sunbeds on upcoming other yachts, too.

The rake of the transom, meanwhile, doesn’t just benefit the sunbeds. The Sunseeker 87 Yacht gains more stowage space immediately inside. Specifically, the shipyard says 56 cubic feet (about 1.6 cubic meters) awaits. Two additional lockers add 90 cubic feet (about 2.55 cubic meters) as well. Use this for watertoy-related gear if you wish. It’s convenient, since the megayacht’s hydraulic platform can hold a Williams 460 SportJet and a PWC. You can further stash SeaBobs in self-draining lockers. 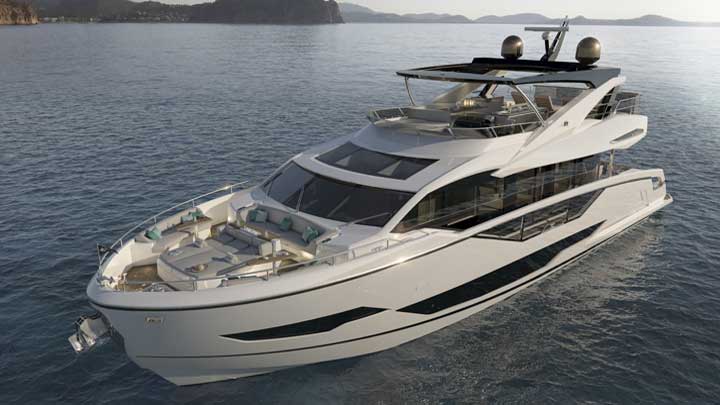 Thanks to a built-in barbecue, the aft deck/alfresco beach club can be an all-day hangout. But, the foredeck and the flying bridge each are attractive relaxation areas as well. Sunpads, with electrically adjustable backrests, and three seating areas sit forward. The Sunseeker 87 Yacht even has a hide-away 140-inch movie screen and projector as options here. Up top, meanwhile, the megayacht has a bar, additional barbecue, and dining space (or lounging space, outfitted as you wish). Further optional is the flying bridge’s infinity hot tub. Regardless, you should appreciate the opening hardtop, and reportedly 25 percent larger overall deck area compared to similar yachts.

Although images are not available, the interior of the Sunseeker 87 Yacht has changed compared to the initial concept. Part of this comes from optional sliding glass doors to port in the saloon, plus an optional skylight for the wheelhouse. In addition, a day head is standard by the wheelhouse. Yet another change, you can choose between five and four staterooms. With the larger number, you lose the full-beam master, which instead becomes two cabins. The VIP instead could serve as the master stateroom. In either configuration, two aft cabins can feature twins or double berths.

Look for the 87 Yacht to launch next summer. On a related note, she is not replacing the 86 Yacht, despite offering 20 percent more usable space. Rather, Sunseeker intends to keep both, since the 86 is popular.