In 2011, Giuseppe Palumbo, head of Palumbo Group, decided to expand his shipbuilding company’s reach into the private-yacht sector. Five years later, a Middle Eastern client signed a contract with the Palumbo-owned Columbus Yachts for this 261-footer (79.5-meter). Between the scale of the project and a tight delivery timetable, Dragon represents an interesting look at how a commercial operation adapted quickly to the different demands of a new client base. 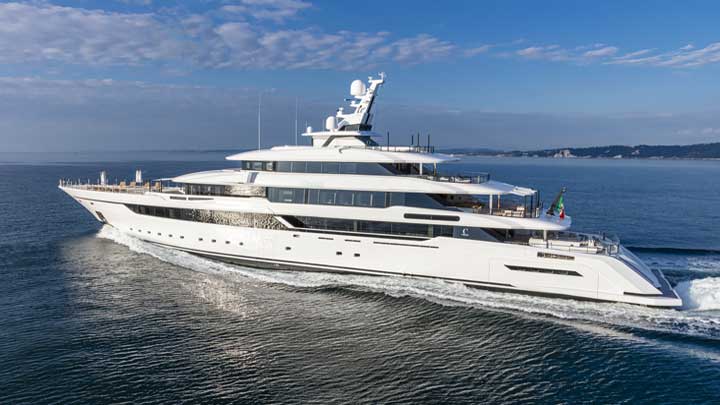 With six decks and a volume of nearly 2,300 gross tons, Dragon customarily would involve lengthy discussion, design, and build processes. Consider, then, that initial meeting to contract signing took just three months. In addition, construction took 27 months, within the short delivery period the owner requested. Time savings partly came from starting construction about four months before contract signing. Indeed, Columbus Yachts felt confident it could get underway with a large yacht while still allowing a client full personalization, including styling and LOA.

Time savings further came from collaboration between Hydro Tec and Columbus Yachts. The owner and project manager did not present a list of pre-determined systems. Several major decisions, in fact, came after contract signing. This could have clashed with the shortened timetable, to say the least. However, the yard’s understanding of big machinery and systems aboard large commercial vessels, plus Hydro Tec’s experience with long-range cruisers and explorers, allowed anticipating how to best lay out the engineering plan without delays. 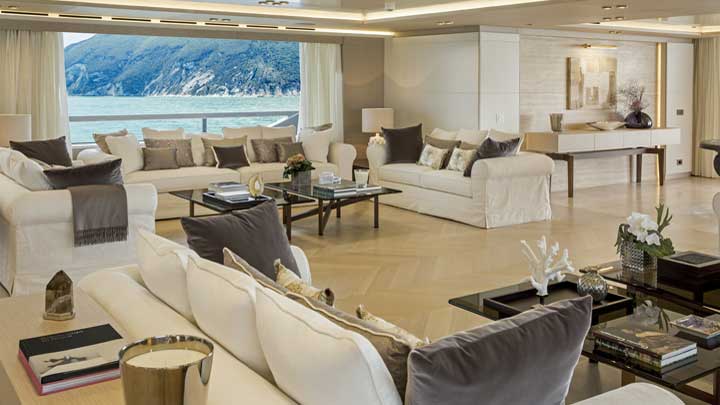 The owner did, though, communicate his vision for the interior early on with Francesco Guida. Specifically, he requested that Dragon reflect a modern Provençal style. White oak appears in abundance underfoot and as paneling. Modest bronze and gold metal inlays in furnishings add interest while keeping the ambience subdued. The atmosphere remains inviting, though, thanks to several seating areas in the saloon, for instance, as well as the large frameless ports you see here. In fact, these ports measure 16’4” by 6’6” (5 meters by 2 meters), among the largest on any European-built yacht.

Since he’s protective of his privacy and private domains onboard, the owner of Dragon hasn’t permitted stateroom images to be released. Regardless, four ample guest staterooms and a VIP, all on the main deck, carry the same interior design themes as the crowd-pleasing social areas. The VIP is apartment-like, too, with its own saloon. 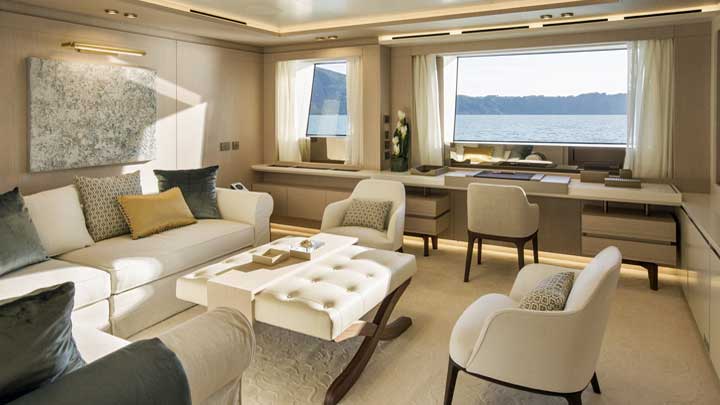 The master suite, one deck up, has a private saloon as well. It’s actually an open-plan office, lounge, and bar, situated just inside an alfresco dining area for 14. For privacy, the suite has a door, along with a curving wall-like headboard in the sleeping area. This wall helps form a cozy seating area, complete with an inset TV, leaving the bed as the oasis. It really is an oasis, too, since the bed faces a wall of windows and a private deck area forward.

Dragon dazzled at launch in March, her six decks giving her an imposing presence. From a waterfall-equipped pool on her sundeck to the striking beach club, featuring a backlit blue-agate wall (at top), she threw the gauntlet down for Columbus Yachts. With additionally complex challenges on its plate, the shipyard believes it is continuing to prove its mettle.

Click any of the thumbnail images to launch a larger image.