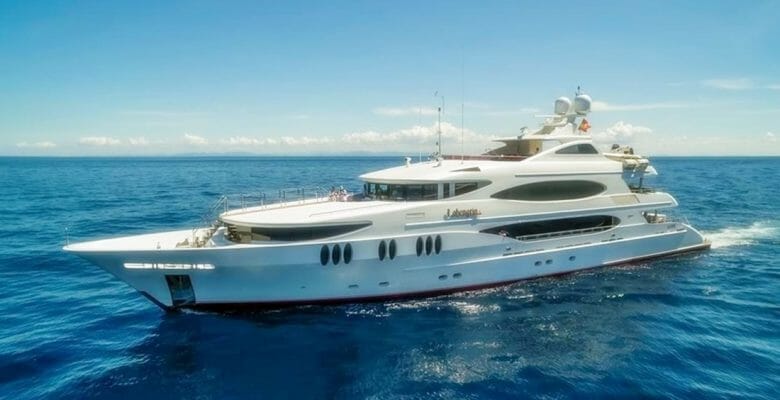 UPDATE, NOVEMBER 18, 2019: Fire officials were still at Universal Marine Center on Sunday. They were trying to extinguish hot spots while a crane removed scaffolding from around the yachts. Investigation into the cause, and salvage, will begin once the scaffolding is gone and crews can access the yachts.

Twenty-seven fire units responded to a fire at Universal Marine Center in Fort Lauderdale during the early morning hours today. While an investigation is underway, and full impact assessment is pending, two megayachts, Reflections and Lohengrin, suffered severe damage.

Reflections, a 107-foot (32.1-meter) Christensen, and Lohengrin, a 161-foot (49.1-meter) Trinity, sat side by side at Universal Marine Center for service. Lohengrin was undergoing interior works as well as painting within tented scaffolding. Reflections was at the shipyard for similar tasks.

According to the local fire department, it received a call regarding the flames around 4:40 a.m. Witnesses related hearing explosions, too. It’s not clear, though, where the fire actually started, nor why. But, according to Jeffrey Lucas, the fire chief for Fort Lauderdale Fire Rescue, he and his fellow unit members believe that the flames broke out aboard one of the megayachts. The fire then spread to the other yacht due to the wind.

No other yachts were impacted, according to officials. In addition, no one was injured. However, firefighters did not have an easy job. Stephen Gollan, the Fort Lauderdale battalion chief, tells the Sun-Sentinel newspaper that crews finally got the flames under control after four hours. Smoke was still visible late this morning, too, and firefighters were still dousing at least one of the yachts, as seen in the local TV news broadcast embedded above. The scaffolding surrounding the yachts complicated matters, making it hard to access the heart of the fire.

Universal Marine Center is one of several yachting businesses on the so-called Marina Mile in Fort Lauderdale.

Reflections saw delivery from Christensen in 1997, previously known as Kingfish. Lohengrin, meanwhile, saw delivery under her same name from Trinity Yachts in 2007.