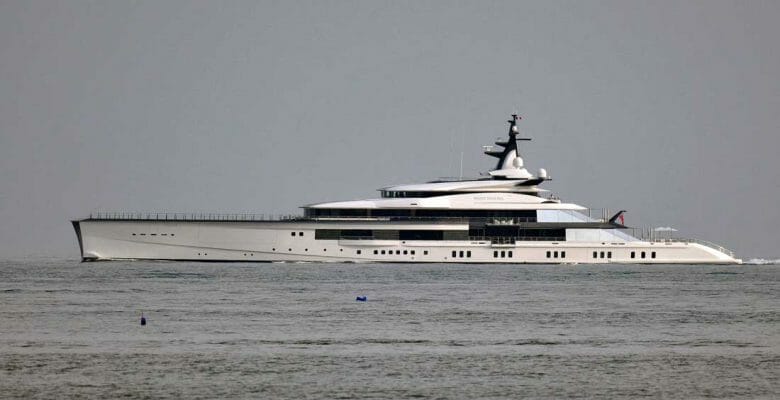 For the past five days, people in the UK have been buzzing about a particularly large yacht tying up in the River Thames. Seeing Bravo Eugenia in London is unusual indeed, since the city doesn’t typically see many vessels of this size. While most of the major media coverage has focused on her luxury features, and of course her owners, Dallas Cowboys owner Jerry Jones and his wife Gene (a.k.a. Eugenia), the figurative buzz should really be mostly about the lack of literal buzz. Bravo Eugenia made her way along the river essentially silently.

One of the largest deliveries of 2018, Bravo Eugenia commands plenty of attention due to her 358-foot (109-meter) length. Construction came at Oceanco, to a naval-architecture and exterior-design collaboration between Nuvolari-Lenard and the Lateral Naval Architects division of BMT Nigel Gee. Though few will ever see it, her engine room is among the features setting her apart. Typically in this size range, engine rooms are two-level affairs, impressively outfitted for engineers to have bird’s-eye views of major machinery. Bravo Eugenia is no less well outfitted, but in a major departure, she has a single-level engine room. The design is deliberate, to create more space for guest comfort particularly below decks.

The arrival of Bravo Eugenia in London occurred, as mentioned, nearly silently. It’s due to her engine room featuring a hybrid propulsion system. As she cruised up the River Thames, she did so only on battery power. It’s worth noting that the propulsion system additionally incorporates heat- and energy-recovery systems. (If you spend any time in an engine room, you know how hot it can get just from the machinery running. Furthermore, all machinery varies in energy efficiency. Today’s technology allows recapturing the so-called wasted heat and wasted energy, better than in years prior.) All together, the propulsion system reportedly permits reducing fuel burn up to 27 percent. Plus, it complies with major environmental notation requirements, as well as permits Bravo Eugenia to operate in sensitive emission-control regions.

All of these technologies earned Bravo Eugenia the La Belle Classe Explorer award from the Monaco Yacht Club. A new award, it reflects the yacht club’s support of ocean preservation and technological innovation in regard to respecting the ocean and its biodiversity.

The mere presence of Bravo Eugenia in London remains newsworthy, rest assured. But we should not overlook how important her underlying technology is.