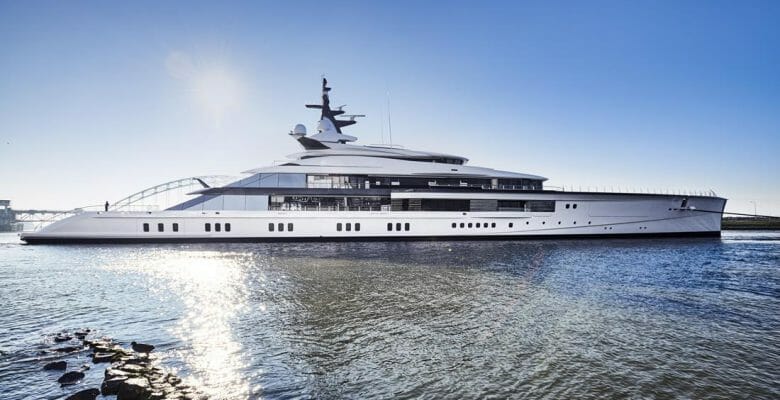 Staying safe at home never looked so good. Neither, for that matter, did working from home. While other NFL team owners are giving us glimpses into their living rooms, dining rooms, and basements as their 2020 NFL draft war rooms, the owner of the Dallas Cowboys has upped the ante. Bravo Eugenia is Jerry Jones’ war room.

Even ESPN crowned him “the unofficial king of virtual drafting.” So far draft watchers have only seen one room aboard the 358-footer (109-meter), built by Oceanco and delivered in 2018. We don’t expect Jones to change scenery for the rest of the weekend, either. Regardless, it’s a pretty fine room:

The UK-based studio Reymond Langton Design handled interior design for Jones, who named the megayacht for his wife. Verified in the screenshot above, Jones’ war room features pale-tone woods and other materials. Not visible, though, are accents of walnut and ebony, or lacquered treatments for some surfaces.

Regardless, as striking as Jones’ war room is, it is not the most remarkable part of the megayacht. Her engine room defies convention for yachts of her size by remaining on a single deck level, rather than spreading across two decks. Jones liked this idea, because it prevented taking usable guest space away. Furthermore, Bravo Eugenia features a hybrid propulsion system, which additionally incorporates heat- and energy-recovery systems (a.k.a. waste heat and waste energy). Oceanco has said that the propulsion system burns up to 27 percent less fuel than comparable all-diesel engine arrangements.

Bravo Eugenia is Jones’ war room for the remainder of the draft, which ends today. While none of the other team owners have broadcast live from boats, Bravo Eugenia is certainly not the only NFL-related yacht. In fact, Lady S, Kismet, and a few more superyachts belong to Super Bowl contenders. Plus, last year, Atlanta Falcons’ owner Arthur Blank took possession of DreAMBoat (with the capital letters signifying his initials).