You are here: Home / Yachts / Motoryachts / Vripack’s Futura Concept Is Fossil-Fuel-Free—and Anything But Fantasy 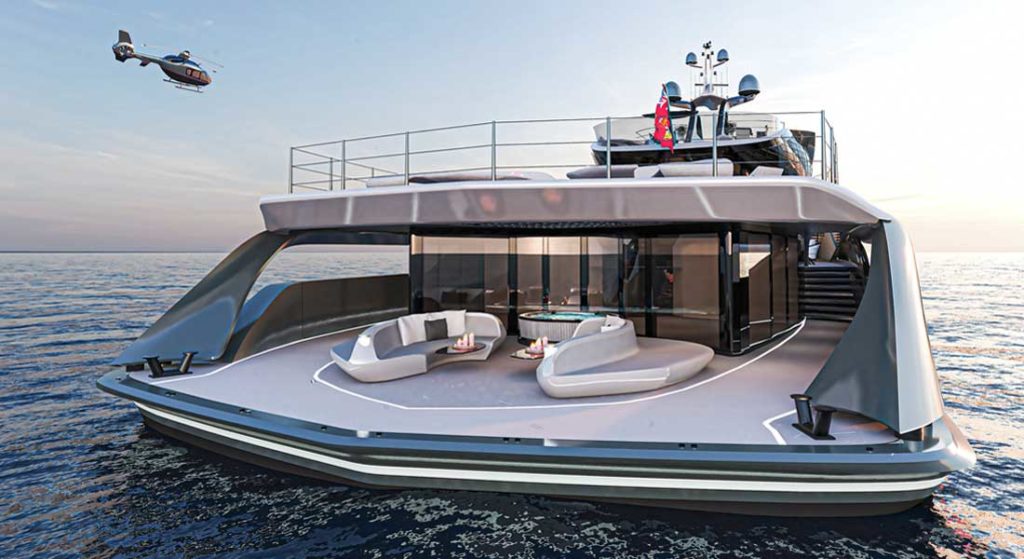 Designers create concepts to entice, and entertain. While some veer into imaginary territory in an effort to do so, Vripack does not. In fact, its internal innovation lab (what it calls the Vripack Brewery) is tasked with devising novel ideas within the realm of possibility. Vripack’s Futura concept is the latest result, an entirely fossil-fuel-free megayacht.

Some of the inspiration comes from Vripack supporting the notion that sustainability is a design challenge to improve life, not a moral sacrifice or a political quandary. It’s a notion first espoused by the renowned architect Bjarke Ingels. “By approaching sustainability as a design challenge, we’re not waiting for owners to request this technology,” explains Bart Bouwhuis, Vripack’s co-creative director. “We’re presenting them with a concept based on sustainable solutions that currently exist.”

Vripack’s Futura concept, a 216-footer (66-meter), incorporates a diesel-electric propulsion system capable of running on about 26,400 gallons (100,000 liters) of biodiesel and further incorporating a bio-based battery bank. Already in use in the international trucking industry, the biofuel comes from food waste. Vripack says it allows for a 90-percent reduction in carbon-dioxide emissions and a 30-percent reduction in nitrous-oxide emissions. Plus, standard marine engines can run on it. 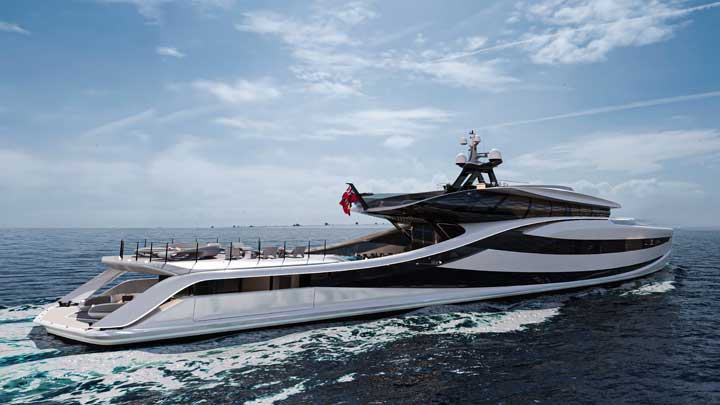 As for the bio-based batteries, by definition, they use biological substances as the active materials. Specifically, for Vripack’s Futura, these are salt, sand, water, and plants. Vripack says the capacity is similar to that of the lithium-ion batteries currently in use aboard megayachts. However, the bio-based batteries can discharge and recharge simultaneously. Charging comes from a large kite on an electric winch—a.k.a. wind energy. As Marnix Hoekstra, co-creative director with Bouwhuis, sums up the overall propulsion system, “We dialed back from bleeding edge to cutting edge.”

Vripack’s Futura concept is cutting edge in looks and layout, too. The 1,100-gross-ton megayacht stands about a third of the height of a same-size traditional yacht. Her cocoon-like, glass superstructure catches your eye. “In practice, this means that everybody on Futura can be dong their own thing, but you’ve still got this consciousness of where your family and friends are,” Bouwhuis explains. 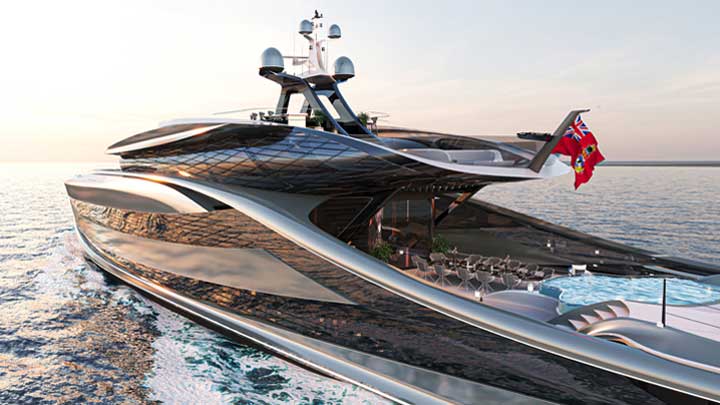 Arguably, though, the boldest aspect to the design is also the most practical. Vripack’s Futura welcomes guests not onto a shallow swim platform flanked by staircases. Instead, they directly enter an open-air beach club (top) that flows through glass doors into more relaxation areas. In fact, the doors lead in to the spa and gym, and farther forward to the six guest staterooms. (The designers envision seven staterooms in all.) No forcing guests up onto the main deck for their formal welcome. Should they desire to relax in the saloon, however, stairs tucked several paces forward along the side decks do the trick.

The rest of the layout is equally novel yet practical. Vripack takes a split-level approach, rather than a traditional stacked-deck approach. Therefore, you’ll find a loft-like upper-deck and a just-as-cozy sundeck just a few steps up. Everything feels connected, since each area takes into account the human connection. That also explains the built-in DJ booth on the upper-deck, perched over the expansive pool and sunning/dancing area.

Whether a future client plans to dance ‘til dawn or enjoy a peaceful starry night, it’s all within the realm of possibility.