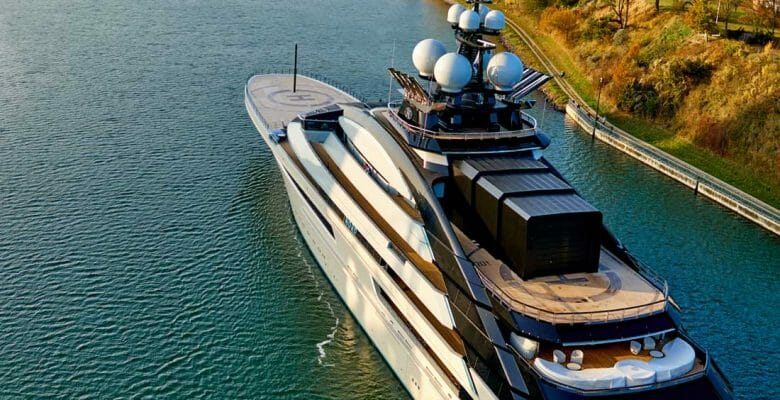 There’s an old saying on New Year’s Eve: “Out with the old, in with the new.” To help you look forward to 2021 even more, we’re previewing seven exciting superyacht deliveries. These aren’t necessarily the biggest yachts set for handover, however. Certainly, some are among the largest. But, all make our list for different reasons, as you’ll discover.

Nord. This Lürssen (above) has had two different project names, including Opus and Project Redwood. Coming in at 466 feet (142 meters), Nord was conducting sea trials in November. She has accommodations for 36 passengers and two helipads, plus a heli hangar. Additionally, she features striking styling and interior design by Nuvolari-Lenard.

Oceanco Y719. Few details are public about this 384-footer (117-meter). Regardless, Oceanco Y719 is among the exciting superyacht deliveries of the next year due to being the shipyard’s largest contract to date. Furthermore, she’s among the largest Dutch-built private yachts to date.

Project Black Shark. Interestingly, Nobiskrug has had the green light from the owners of Project Black Shark to publicize her regularly since her keel laying. Come delivery in springtime, we’ll get a better look at her matte-black hull paint, mimicking sharkskin. Her mast resembles a shark fin, too. The five-deck yacht measures 253 feet (77 meters). 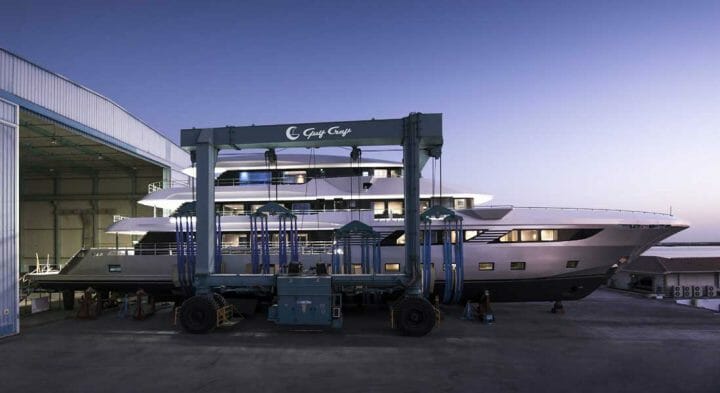 78M Amels. This 256-footer (78-meter) is the largest Amels by volume. Specifically, it’s about 2,850 gross tons. Signed in 2017, the yacht is entirely custom designed and features both styling and her general arrangement by Espen Øino. Still mostly confidential, the yacht has a foredeck pool.

Boardwalk. Boardwalk carried the code name Project 707, her hull number, during the majority of her construction at Feadship. The 251-footer (76.5-meter) megayacht belongs to American restaurant and casino mogul Tilman Fertitta. She will replace a same-named Westport 164 that Fertitta has long enjoyed, and even kept docked at his Golden Nugget casino in Atlantic City, New Jersey.

Majesty 175. Based in the United Arab Emirates, Gulf Craft splashed its biggest boat to date just a few weeks ago. Furthermore, the Majesty 175 (above) is the world’s largest production-built fiberglass yacht. Fun fact: Owners get a special lounging area just outside of the upper-deck master, a 16-foot-long (5-meter-long) pool. Overall, the Majesty 175 accommodates a party of 14.

Project Phi. Royal Huisman is releasing more and more peeks at Phi, among the exciting superyacht deliveries of 2021 because she is an unusual motoryacht. She has a slender hull for her 192-foot (58.5-meter) length, for instance. Everything about her relates to Phi, a.k.a. the Golden Ratio, pertaining to mathematics and design. Specifically, it often signifies a sense of aesthetic appeal in balance and harmony of design. “The owner of Phi wanted to build a yacht with a profound underlying story,” says her designer, Cor Rover.