Joseph Vittoria, renowned in yachting for owning a series of sailing superyachts he christened Mirabella, died on January 18 at his home in Connecticut after a battle with leukemia. He was 85 years old.

A second-generation American of Italian ancestry, Vittoria grew up in Sea Cliff, New York. He developed a love of sailing during childhood. In fact, given Sea Cliff’s proximity to Long Island Sound, he frequently volunteered to crew the boats of members of the local yacht club. Vittoria went on to graduate from Yale University with a degree in civil engineering and from Columbia University with an MBA.

Even with the demands of school, brief service in the military, and subsequent key roles with both Hertz and Avis rental-car companies, Vittoria never gave up on sailing. In fact, while living in London in the 1970s with his young family of four children and his wife Luciana, whom he met through cousins in Italy, Vittoria bought a series of Camper & Nicholson sailboats. Throughout the decade, he and his family cruised around the Mediterranean off Italy.

Vittoria returned to the United States in the 1980 with his family, settling in Greenwich, Connecticut and later in Palm Beach, Florida. He gained fame as the CEO of Hertz, and then as the CEO of Avis. While he drew tremendous satisfaction from his work at the companies, especially in leading an employee stock-ownership plan at Avis, Vittoria was even more satisfied upon retiring in 1997. That was when he was able to pursue sailing passionately, simultaneously combining it with his love of engineering. 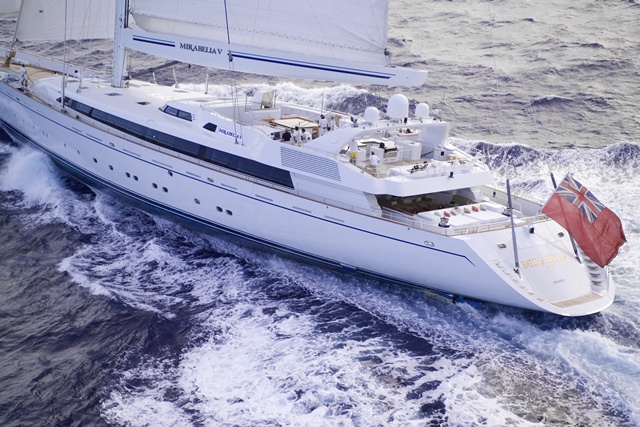 Specifically, Vittoria owned four sailing superyachts bearing the Mirabella name. Mirabella and Mirabella III, for example, were each 131 feet (40 meters) LOA. Mirabella II, meanwhile, was 136 feet (41.5 meters), delivered in 1994. Interestingly, he chose to skip a yacht christened “IV,” going straight to the astonishing sloop Mirabella V. LOA: 247 feet (75 meters). Launched in 2004 (Vittoria is pictured aboard her at the ceremony), Mirabella V entered the record books for possessing the world’s tallest single mast. Furthermore, she pushed the limits for a composite superyacht. Consider, for instance, that her lifting keel was 150 tons. Additionally, her reacher measured 20,450 square feet (about 1,900 square meters). Throughout all the Mirabella years, Luciana Vittoria oversaw the business aspects, including charter. Mirabella V went on to new owners as M5 during a two-year refit from 2012 to 2014.

Doctors diagnosed Vittoria with MDS, a group of blood disorders that sometimes turns into leukemia, in late 2018. Regular treatments kept it manageable, though, through the following year. Unfortunately, it progressed into leukemia and worsened by early 2020. Remarkably, Vittoria caught COVID-19 earlier this month, recovering after several days in the hospital. But, the leukemia was so advanced that he died four days after returning home.

Joseph Vittoria is survived by his wife of 58 years; his children Joseph, Jerry, Audrey, and Edward and their spouses; and 11 grandchildren.