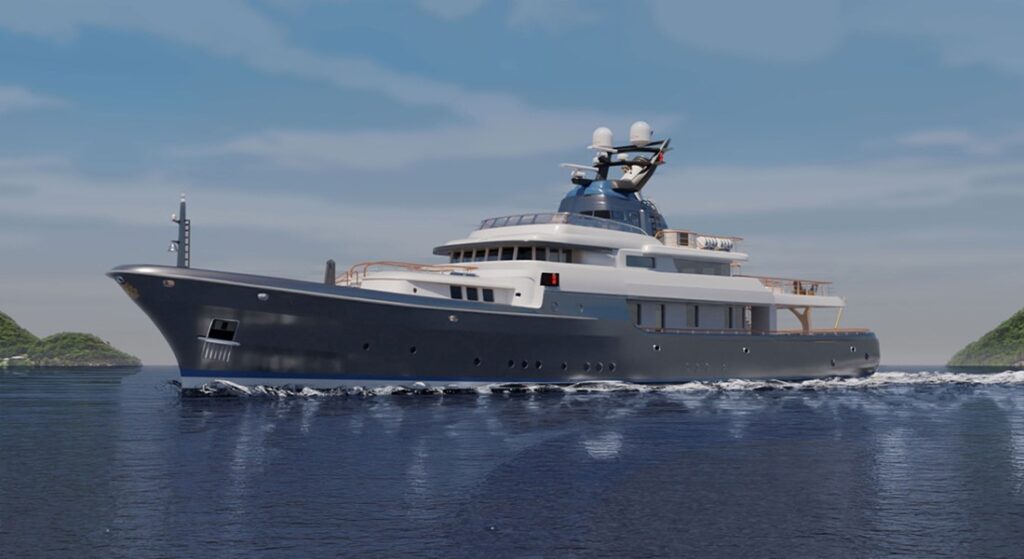 Watch any classic film involving the sea, and the ships have an undeniable magnetism. They not only look robust, but in scene after scene stand up to Mother Nature. Similarly, Liebowitz & Partners’ Commodore 57 conveys capability in crisscrossing oceans, albeit for more pleasant purposes. Plus, akin to the ranking officer of a navy, the megayacht has her own “fleet,” unusually large tenders.

Commodore 57, a 187-foot (57-meter) motoryacht concept, builds upon the design studio’s experience with another expedition yacht. Steel, a 180-footer (55-meter), launched at Pendennis in 2009 with an ice-class hull. Both have high, strong bows for pushing aside waves, and purposeful looks. Of course, both have luxury amenities for the owners’ party, too, for enjoying the journey as much as the destination. 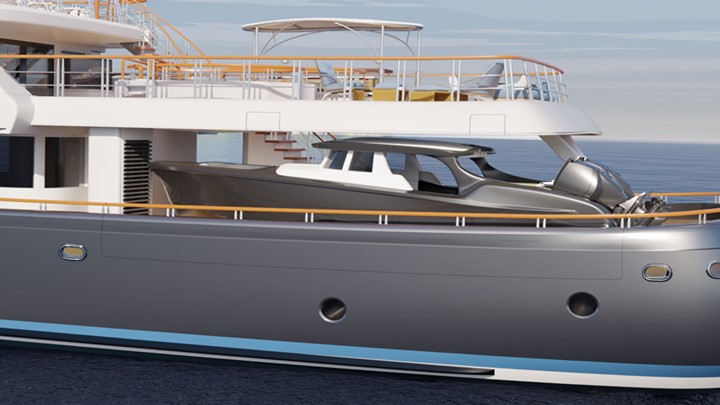 To that end, Commodore 57 has two sizable guest tenders, a 34-foot (10.4-meter) enclosed expedition craft (above) and a 28-foot (8.5-meter) sport RIB. “Aside from a good bed and a creative chef, the most important tool aboard for any vacation is a capable, big tender,” asserts Richard Liebowitz. Fittingly, he refers to the larger of the two tenders as Blackthorn, another name for a walking stick from Irish and British history. An 18-foot (5.5-meter) rescue/utility tender complements the mini armada.

Whether the hybrid-powered, five-stateroom Commodore 57 ventures to popular places or remote ones, she aims to please. Alfresco amenities include a shaded drinks bar, two hot tubs, as well as a heated 16-foot-long (4.7-meter-long) saltwater pool. Some areas can serve multiple purposes, too, like the aft deck: dining, lounging, and more. Complementing the adventure tender, the megayacht has a dive center, too. Her heart-shaped stern has a clamshell door concealing a teak swim platform and the beach club. A second hatch, to port, folds down for further access to the beach club and its massage and sauna suites. 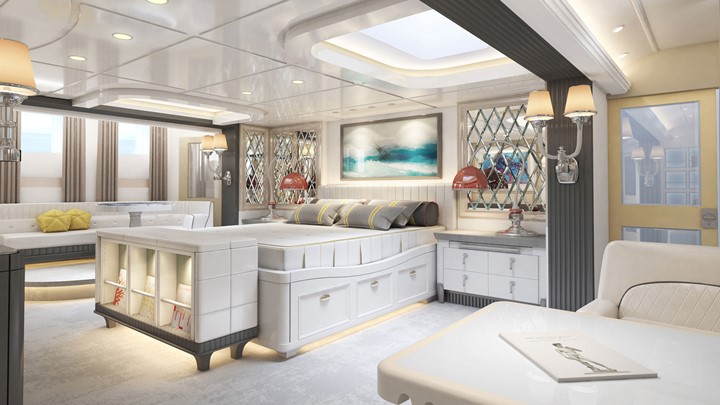 Speaking of suites, for the interior, Liebowitz & Partners have both light- and dark-tone proposals. Regardless, client collaboration is key, especially for treasured artworks and other special touches. Furthermore, the studio believes the interior and exterior should complement one another, with the ambience suiting a seagoing vessel instead of a static land home. And, of course, multiple areas can serve flexible purposes. For instance, step into the main lobby upon arrival, and the crew behind the bar have your favorite drink waiting. Yet another possibility, host a business meeting or large formal party in the skylounge. The 32’5” (9.9-meter) beam will keep your small and large gatherings equally comfortable.