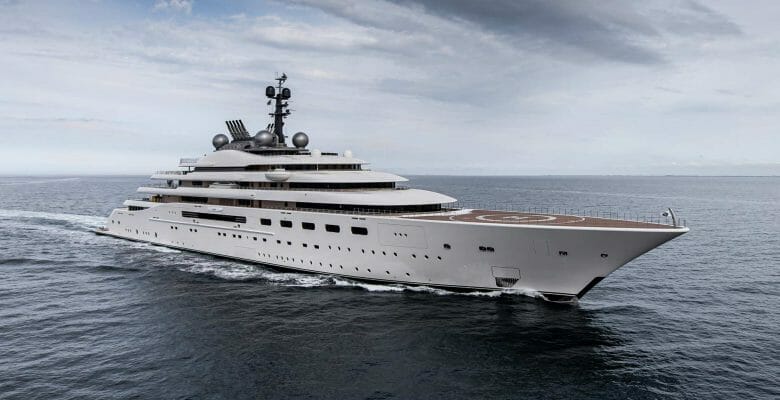 Though still largely confidential in terms of amenities, the newly crowned fifth-largest private yacht in the world is in her owners’ hands. The 525-foot-long (160-meter-long) Blue departed Lürssen this weekend.

In February, yacht watchers got a glimpse as the nearly finished megayacht exited her build shed. That was the first time the shipyard could reveal a few facts. For instance, it confirmed she comes in at a remarkable 15,320 gross tons. Notably, that actually makes her the world’s largest yacht in terms of volume. Previously, the record holder was Azzam—coincidentally, another Lürssen. For comparison, Azzam’s volume is 13,136 gross tons, and her LOA is nearly 593 feet (180.61 meters).

With a beam of 73’8” (22.5 meters), Blue bears styling as well as interior design from Terence Disdale’s studio. Among her eye-catching details are two helipads, one on the foredeck and the other aft on the uppermost deck. Additionally, she has two tenders stowing high up alongside another deck. A sizable swim platform seems as if it could double as a beach area, since it extends forward into an opening area. Furthermore, the majority of the decks are enclosed or shaded, so time out of the sun seems a priority.

At presstime, Blue was underway at an impressive 19 knots, heading to Malta to begin her maiden Med season. Performance is yet another notable aspect of this delivery. In fact, Lürssen says its engineering team developed her diesel-electric propulsion system. Twin diesels connect to electric motors that drive the props. These motors have PTO/PTI units, too. PTO stands for Power Take Off. This means it transfers power from the engine to the props, for electric propulsion for low speeds. PTI, meanwhile, means Power Take In. PTI mode, a.k.a. shaft motor mode, provides power to the shaft to supply extra energy to the diesels for higher speeds.

Overall, PTO/PTI complements a desire to be more energy efficient and therefore more environmentally minded. Lürssen says this mindset was important to the owners and their team. The superyacht Blue further has an electric azimuthing pod drive, capable of operating with the prop shafts in PTI mode. Alternately, it can operate on its own in electric mode. And, finally, Blue has a waste-water treatment system that allows disposal akin to drinking water standards.