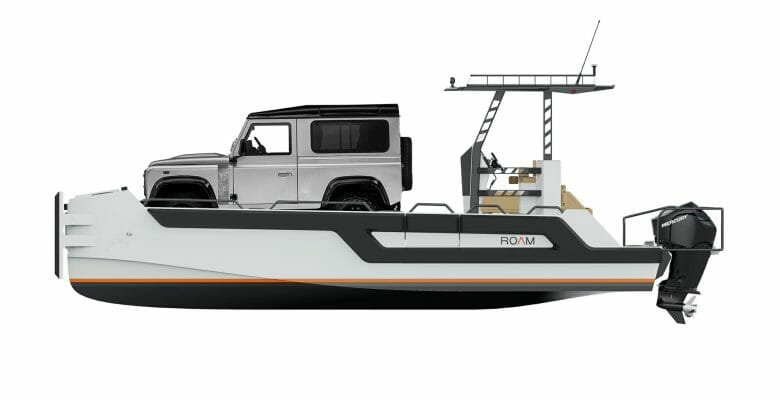 From RIBS to superyacht support craft, Roam Boats offers a variety of semi-custom aluminum tenders for, well, roaming. They’re adventure-oriented, especially for diving or exploring remote shores where motherships can’t go. In collaboration with Superyacht Tenders & Toys, the Roam Landing Craft is the latest, for taking ship-to-shore trips up a notch.

Measuring 27’9” (8.5 meters), the vessel features design by Argo Navis, which works with Roam Boats on all of its projects. For this particular project, the three companies focused on creating a craft that would be equally capable of carrying watertoys like paddleboards and even a car. The 10’5” (3.2-meter) beam of the catamaran configuration therefore is ample enough for an SUV. A drop-down partition makes loading and unloading the auto, along with guests, simpler. Plus, the shallow draft, just shy of two feet (0.6 meters), means the Roam Landing Craft can get super close to shore. When it’s time to retrieve the craft, lifting points allow bringing her back onboard the mothership.

Notably, carrying an SUV isn’t the only option. For instance, owners who enjoy diving with friends and family can outfit the Roam Landing Craft with custom bottle holders. Seating for six guests in different configurations is possible, too, along with seats for two crewmembers. Additionally, Richard Booth, Superyacht Tenders & Toys’ project manager, says, “the vessel is also perfectly appointed for assisting with crew duties such as beach setup, crew transfer, or refuse removal.” Regardless of choice, Roam Boats and Superyacht Tenders & Toys are striving to fill a niche where traditional tenders don’t quite suit.

Due to Argo Navis’ engineering, the Roam Landing Craft is capable of good speeds. Twin 175-hp Mercury V6 outboards should push her to a 20-knot cruising speed and a top end of 28 knots.

Construction can take place in six months as well, due to the semi-custom nature of the craft. Further features, like folding T tops, are available for all Roam projects.