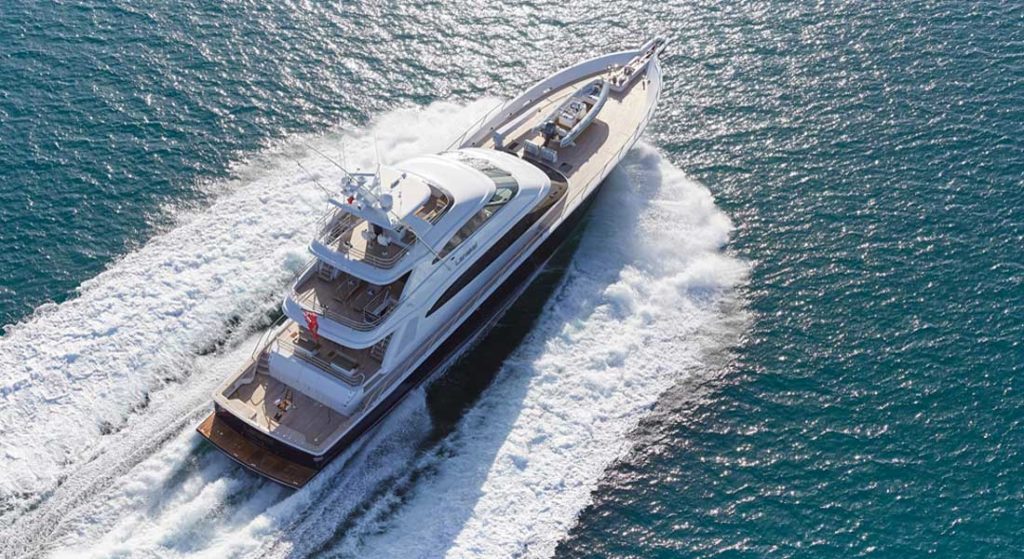 Since her delivery in April of last year, Lanakai has been plying the waters of the Pacific Ocean. Her owners are avid anglers, as well as avid watersports enthusiasts, especially diving. This fun-loving, long-distance-cruising family has been putting miles under the hull of the world’s largest carbon fiber sportfisherman. They stopped still, however, to let us in the media share some looks onboard.

Referred to as Hull 1015 during construction at Yachting Developments in New Zealand, Lanakai is an entirely custom design. It’s a big change for the owners. They previously fished aboard a smaller semi-custom yacht “onto which we squeezed every conceivable feature,” says Michael Peters of Michael Peters Yacht Design. The design studio collaborated with them again for Lanakai. Peters particularly calls the husband “a truly engaged, hands-on yachtsman who makes the design process a pleasant and relatable one.” 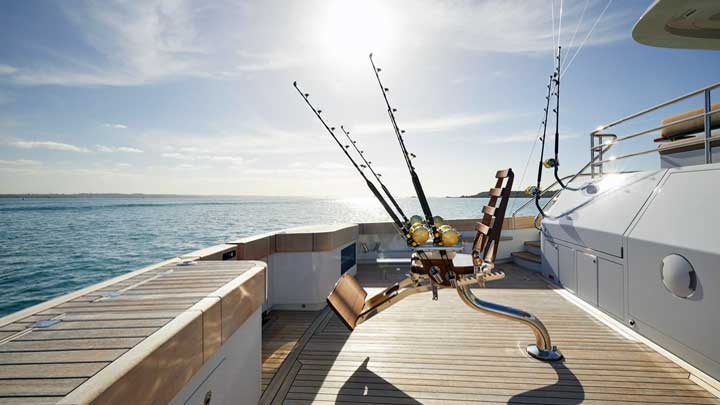 Interestingly, the husband says they initially considered a more traditional displacement motoryacht. “After much discussion within the family, who are passionate about fishing and diving, we decided to go with what had worked for us in the past,” he says. Of course, the 129’6” (39.5-meter) Lanakai has the all-important Pompanette fighting chair and rod holders aplenty. She also packs powerful performance for backing down on fish, reportedly at 8 knots. (Her twin MTUs further permit a reported cruise of 20 knots.) In true sportfishing fashion, big scuppers with flaps keep water from flowing into the cockpit. Also in true sportfishing fashion, a livewell (with two more on the swim platform), tuna tubes, and a freezer fed with flake ice all cater to anglers’ needs. A barbecue back here serves up the catch of the day and keeps the cockpit social. 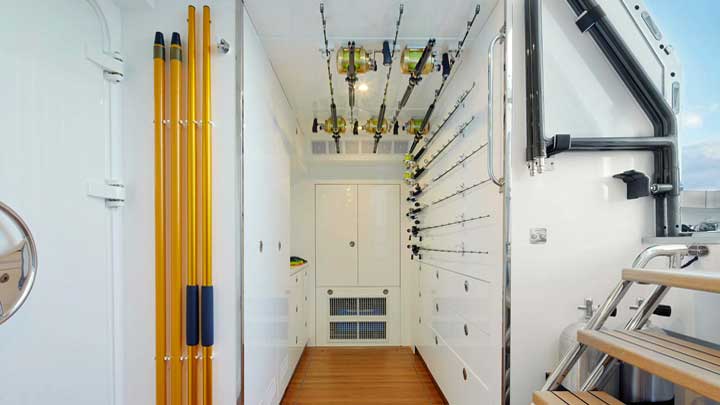 As you can imagine, given the long distances planned, Lanakai needs abundant stowage. That explains this locker in the lazarette. Besides holding additional, ready-to-go rods, it houses the dive equipment. It further has hanging stowage. On a related note, even the cockpit can address stowage needs. The fish fridge/freezer can hold up to six months of provisions when not wanted for fresh catch. 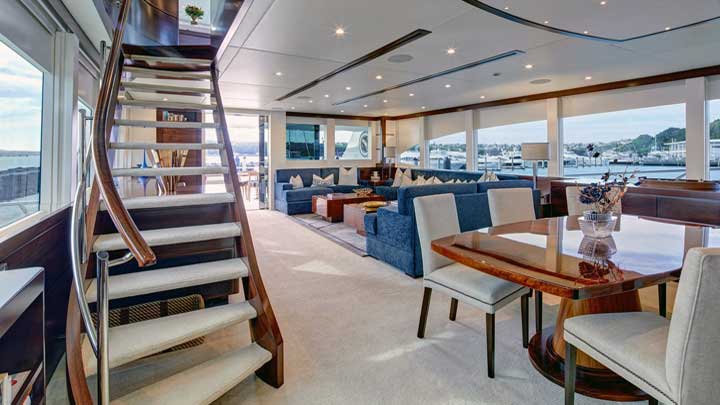 The owner says the family wanted Lanakai built “to a superyacht standard.” Walnut wood and nautical-minded blues and creams create a warm, welcoming interior. In a nod to her fishing pursuits, black-and-white photos from noted photographer Zane Grey appear throughout, too. Not shown, the saloon has its own beer refrigerator, for convenience. So do several other areas onboard the 28-foot-beam (8.6-meter-beam) boat. They include the aft deck, cockpit, and flying bridge. 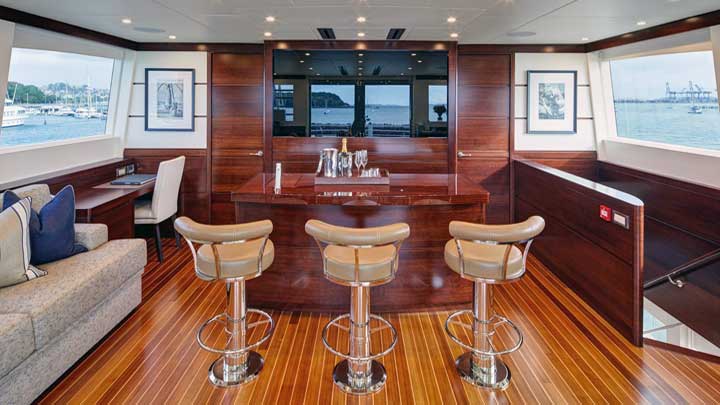 The skylounge, of course, is yet another such area. As much as the family enjoys casual self-service, the formal bar is still a crowd-pleaser. Note the smoked glass forward, a privacy screen for the wheelhouse. With the two adjacent doors closed, it preserves the captain’s night vision. During the day, though, the owners can keep the doors open and slide down the screen for a more bright and airy—and sociable—setting. 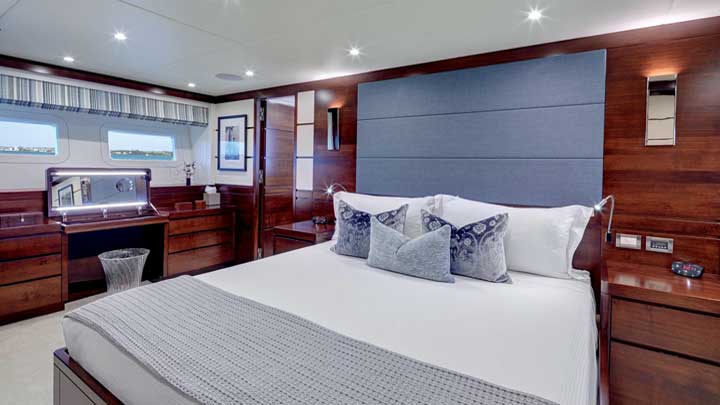 Additionally for superyacht standards, Lanakai’s staterooms each “float,” for sound attenuation. Four staterooms in total, with this being the master, are aboard. Up to 10 people can enjoy overnight travels together, since Pullmans are in the twin cabin. But, the four staterooms more comfortably accommodate eight. 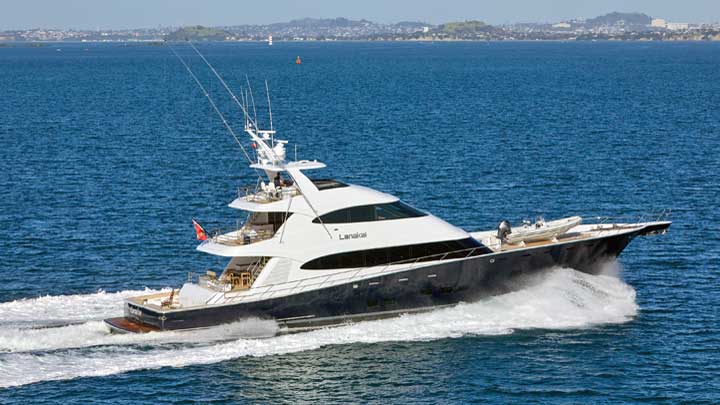 With a fuel capacity of 11,100 gallons (42,000 liters), Lanakai made her way from New Zealand to Fiji in recent weeks. There are no signs of her seeming to dial back her activity, either. And why should she? Her owners are thrilled “to travel to some of the more remote parts of the Pacific we have previously enjoyed,” the husband says. The Yachting Developments staff is thrilled, too. “This was a unique opportunity to use higher-technology raceboat and sailboat construction techniques in a powerboat that was extensively geared around pleasure, but with high-performance orientations,” says Ian Cook, the yard’s managing director.