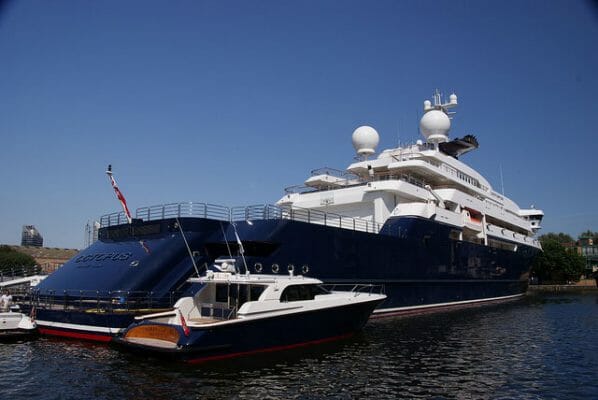 It’s been a busy year for Octopus and her owner, Paul Allen—and it’s about to get even busier. The 414-foot (126-meter) megayacht will assist the British Royal Navy and a deep-sea shipwreck-recovery company later this month. They’ll attempt to retrieve the bell from an historic British naval vessel.

The vessel is the HMS Hood, which sank in 1941 in one of the most significant battles of World War II, fought with the German warship Bismark. All but three of HMS Hood’s 1,400-plus crewmembers died in the battle. It was the largest loss of live in British naval history.

The exact location of the wreck, between Greenland and Iceland, wasn’t pinpointed or filmed until 2001, by David Mearns of Blue Water Recoveries, a successful shipwreck researcher and hunter. Mearns will participate in the upcoming bell-recovery expedition, too.

As for Octopus (pictured in London just prior to the start of the Olympic Games), Allen is donating her to the recovery efforts. You may recall that recently, Octopus played a role in the historic Mariana Trench dive, conducted by film director James Cameron. In addition, back in 2002, Allen loaned Octopus at no cost to filmmakers creating a BBC documentary about the World War II aircraft carrier HMS Ark Royal.

In a press release regarding the upcoming trip, the HMS Hood Association states, “Whilst the attempt to recovery of the bell is the main focus of the expedition, the Museum and the Association have an equally important scientific objective for revisiting the site. In the 11 years that have passed since the wreck was first filmed, underwater video and lighting technology has advanced greatly, and with Octopus and her state-of-the-art Remotely Operated Vehicle (ROV) there is now the opportunity to film the wreck in stunningly clear high-definition.” The Museum the association refers to is the National Museum of the Royal Navy, which has a new wing opening in 2014. The HMS Hood bell would be the centerpiece of a larger display devoted to the Royal Navy’s history during the 20th century.

Rear Admiral Philip Wilcocks, president of the HMS Hood Association, and whose uncle was killed aboard the vessel, puts it this way: “There is no headstone among the flowers for those who perish at sea. For the 1,415 officers and men of HMS Hood who lost their lives so violently in battle on 24 May 1941, the recovery of her bell and its subsequent place of honor in the National Museum of the Royal Navy will mean that there will be a place where future generations will be able to gaze upon it and remember with gratitude and thanks the heroism, courage, and personal sacrifice of Hood’s Ship’s Company who died in the service of their country—well after the remains of Hood have long gone.”