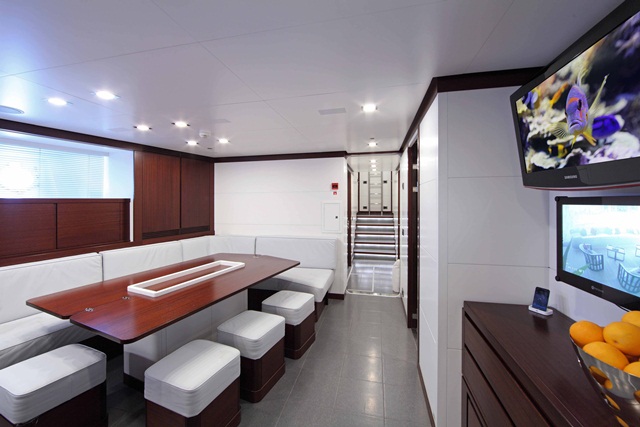 History has been made this month: The Maritime Labour Convention 2006 (MLC 2006), a.k.a. the crew bill of rights, now has ratification from the minimum number of countries necessary to make it a requirement. It goes into effect worldwide in August 2013. This means every megayacht whose keel is laid from that point forward will need to comply.

MLC 2006 is a standard put forth by the International Labour Organization (ILO), a specialized agency of the United Nations. The ILO promotes social justice and internationally recognized human and labor rights, believing that fair standards lead to economic and social progress and prosperity. MLC 2006 establishes consistent living and working conditions for crewmembers of commercial ships and yachts. Note “consistent”: For nearly 100 years, the ILO has adopted dozens of different international standards governing things like work hours, recreation, sleeping spaces, health care, and more. MLC 2006 will replace 37 of them.

MLC 2006 was adopted unanimously in 2006, but it still needed at least 30 ILO member countries to ratify it before it could take effect. The Marshall Islands, the Bahamas, Australia, Antigua and Barbuda, and Russia are among the countries that did so. In addition, the MCA has pledged to enforce it. It has to: Regardless of whether a flag state ratified MLC 2006, all vessels that trade internationally must meet the requirements, and will be subject to inspection. The powers the inspectors have are the same as under MARPOL or ISM, including the right to detain noncompliant ships and yachts.

There’s both good news and potential troubling news about MLC 2006. The good news is that much of what it requires, especially in terms of work-to-rest-hour ratios, is already practiced throughout the megayacht industry. So, too, are the requirements for fair terms of employment, decent working and living conditions onboard, and a safe and secure workplace that complies with safety standards. And, since MLC 2006 pertains to vessels of 500 gross tons and higher that are engaged in what the ILO terms commercial activity, it should only apply to megayachts that charter. Questions have arisen in recent years, though, in terms of how MLC 2006 will affect the general arrangement of megayachts. For example, one aspect of the standard specifies crew-cabin dimensions. A study undertaken by the Professional Yachting Association in 2011 (then known as the Professional Yachtsmen’s Association) revealed that aboard a 144-footer (44-meter), the standard would mean the elimination of two guest staterooms and further take a small amount of room from the engine room.

However, even that troubling news has good news related to it. Megayacht-industry representatives have been working with the ILO for about two years to better educate them. The industry supports the ideas of crew rights, but the “one size fits all” approach to the standards doesn’t necessarily work. This may be one reason why the ILO has stated that MLC 2006 allows flag states to adopt substantially equivalent requirements in certain circumstances. An ILO representative even traveled to Antibes, France last year to tour megayachts and therefore see first-hand where difficulties in applying the standards might arise. Furthermore, since ratification of MLC 2006 was simply a matter of time, megayacht designers and builders have been incorporating the parameters into projects they expect to sign.

More questions will surely arise as MLC 2006 goes into effect next year. But so, too, will the dialog between the ILO and the megayacht industry continue to go on.