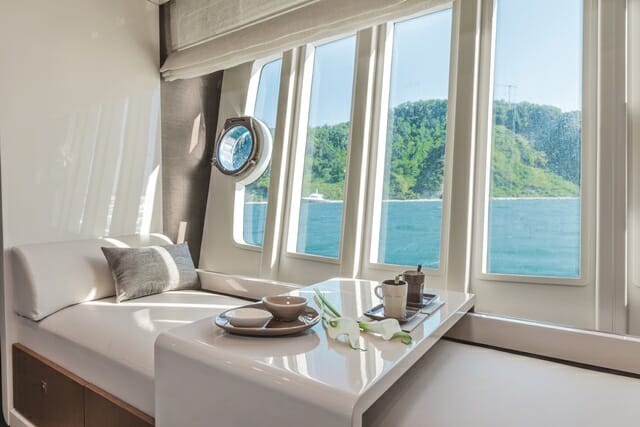 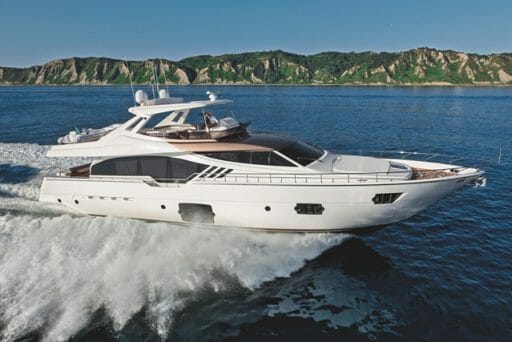 Even though its yachts and megayachts have always had sexy styling, Ferretti Yachts likes to liven things up even more every few years. The newest Ferretti available in the American market, the Ferretti 870, leaves no doubt as to her lineage. This 87’5” megayacht also leaves no doubt as to what buyers and onlookers should think about her purpose: zipping around in a yacht that brings the outdoors inside. 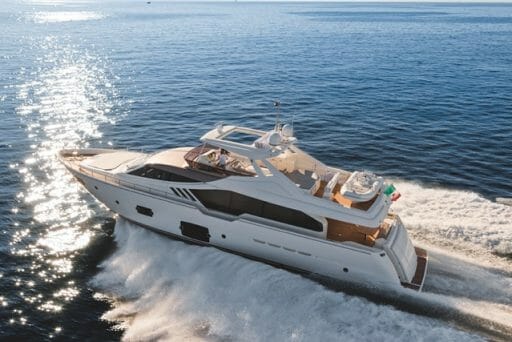 Capable of a reported 27-knot top end, with twin MTU powerplants, the Ferretti 870 has several new styling cues that make her look fast, too. Note the three long, angled ports just forward of the oversize main-deck windows. Note, too, the bronze-painted roof section just above the main enclosed helm. The photo at top gives you a better idea of the effect, but even here, the megayacht looks more aggressive than her sisterships. 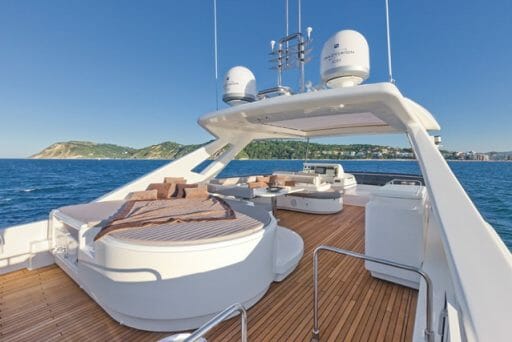 The Ferretti 870 is available with an optional hardtop, fitted with a sliding roof as shown, or a standard roll bar support for the satcoms and radar. Either way, you get space for a tender fully aft; a hot tub just forward of here, fitted with sunpads when it’s not in use; a dining/relaxing area amidships; and a second helm fully forward. 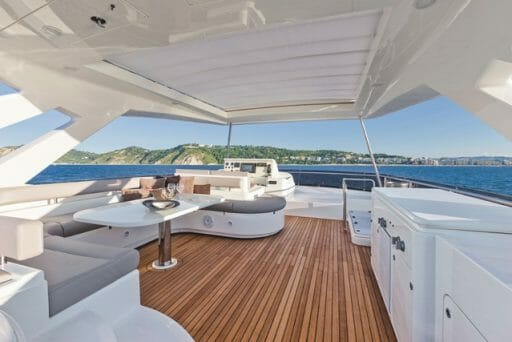 The hardtop and sliding center section are particularly nice for the shade they provide over the dining area. As much as megayacht owners and guests typically spend most of their time outside, sometimes a respite from the sun is needed. The chef can prepare meals at a grill directly opposite the U-shape settee. 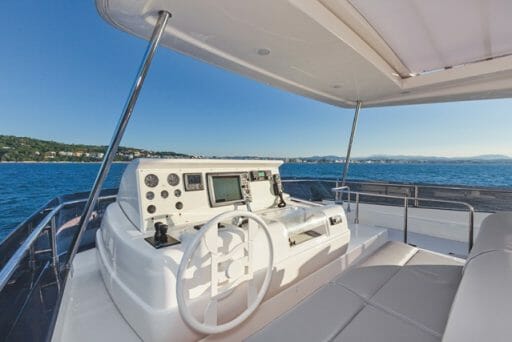 If you’re going stay put in an anchorage for a day or two, the Ferretti 870’s upper helm retracts. Specifically, the portion with the gauges and the monitors is what retreats into the rest of the structure. If you’re not familiar with Ferrettis, this is a feature it introduced on the first models it brought to the U.S. market back in the mid-1990s. 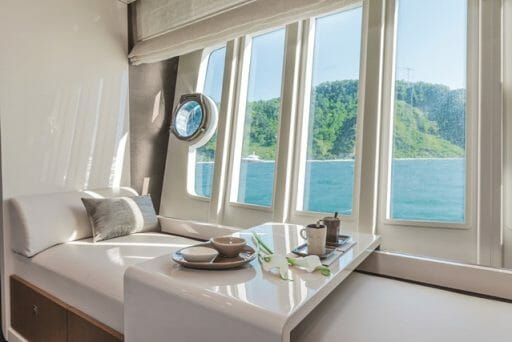 Something else Ferretti has been bringing to the U.S. market again and again: the feeling of being outdoors while inside. These huge ports, in the master suite below decks, do all but make you feel as if you’re dipping your toes in the water. They’re alongside a nice chaise lounge that can double as a breakfast area as shown. Identical ports are on the opposite side of the room, really making the space light and bright. 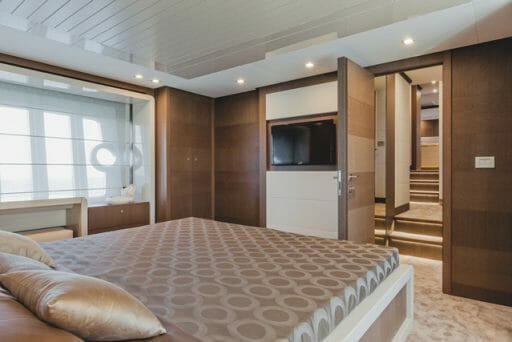 This overview of the full-beam master suite gives you a better idea of the effect of the long vertical ports, though this photo shows them above the vanity is on the other side of the bed. You also get a sense of the 870’s overall decor: modern, simple, and soothing. 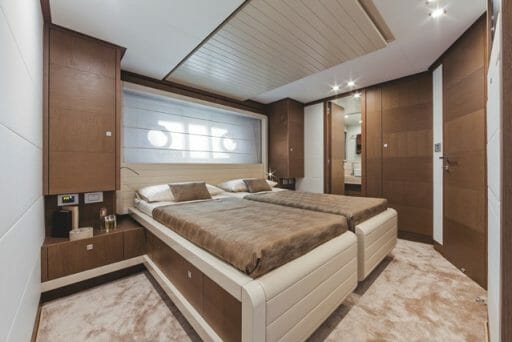 One of the two twin-bedded staterooms aboard the Ferretti 870 is configured to transform into a queen cabin, by pushing the beds together. Note once again the ports, behind the shade. While not nearly as large as those of the master suite, of course, they are a good size. 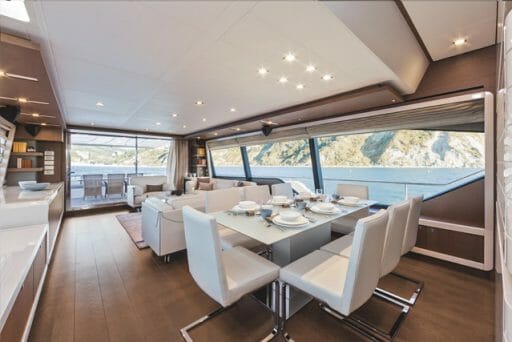 The best—and biggest—port treatment is on the megayacht’s main deck. They’re far deeper than those of any other Ferretti yacht or megayacht to date, and arguably those of the builder’s competitors, too. The ports start at about thigh height on your average-size adult male, and the gunwales are lower than usual as well to maximize the views. 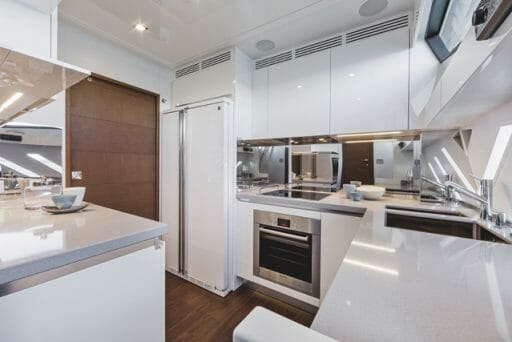 We’ve saved the galley of the Ferretti 870 for last, to leave you with another important impression. For a few years, several Ferretti Group brands have been relocating the galley to the lower deck, to allow for more owner and guest space above. But Americans tend to view below-deck galleys as dungeons, since they’re often small. Not only does Ferretti Yachts puts the 870’s galley on the main deck, but it also keeps it open to the helm, up two steps forward. Combined with an observation settee and table to port of the wheel, the arrangement lets guests chat easily with the chef and captain—something Americans value.