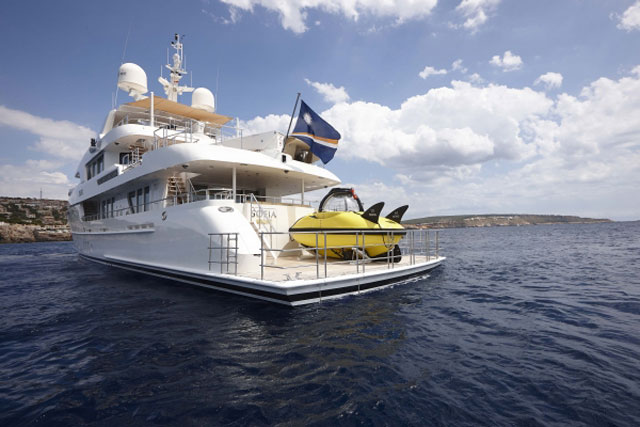 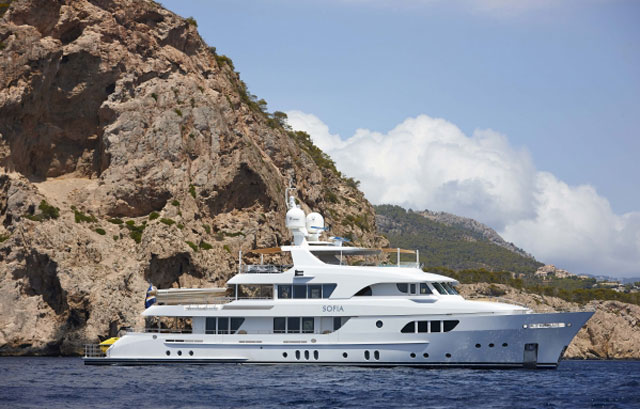 A repeat Moonen Shipyards client and avid diver is enjoying his first season of cruising aboard the 138-foot (42-meter) megayacht Sofia. Sofia is Moonen’s largest megayacht to date, and she’ll debut at the Monaco Yacht Show next month.

Having first commissioned a Moonen 84 in 2004, then a Moonen 97 in 2008, the owner was quite comfortable working with the Dutch shipyard for this project. “The yachts were safe, solid, and reliable even in rough weather,” he says. “I welcomed many experienced sailors and owners onboard, and all were impressed by the construction quality, low noise levels, and immaculate carpentry work.”

For this Sofia, the owner wanted to pursue his passion for diving, but also share the undersea world with friends and family who don’t dive. That drove the decision to equip the megayacht with a personal submarine, making Sofia one of the smaller megayachts worldwide to do so. Initially the owner wanted a two-seater, but the yard convinced him a three-seater would be better, so that a pilot could take him and a guest, or just two guests, below the surface. Specifically, Sofia totes a U-Boat Worx model capable of descending 328 feet (100 meters).

The switch came 10 months after the initial request, requiring the design—already in initial construction stages—to be extended. Moonen, Rene van der Velden, and Stolk Marimecs added four feet, plus a heavier crane. The crane does double duty as a mooring system for the megayacht’s other toys when she’s at anchor.

Inside, Sofia features oak and zebrano woods plus unusual soft goods like coconut paper. The owner directed Art-Line Interiors to ensure that each space flowed easily into the next and preserved as much of an open floor plan as possible. A highlight is the atrium, with back-lit marble mixed with stainless steel for the stairway rising through Sofia’s three decks.

A number of other noteworthy elements are aboard this Moonen, like the gym that can convert into a fifth guest stateroom, and the use of teak on the upper deck to flow from outside straight into the skylounge. We’ll have a full Megayacht News Onboard report following the Monaco Yacht Show.