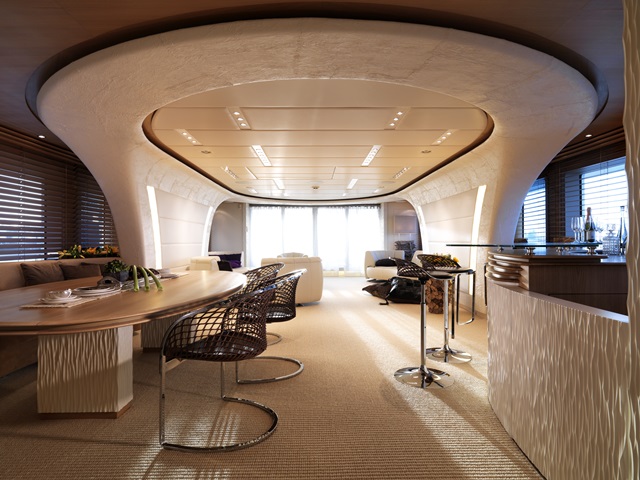 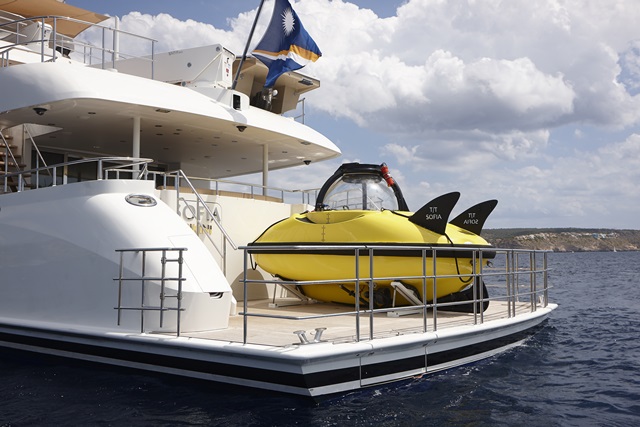 It’s one thing to conceive and build a megayacht around the idea of carrying a personal submarine when you’re an avid diver and you want to share similar experiences with your guests. It’s quite another to order a larger submarine when the yacht is already under construction—and for much of that decision to come at the urging of the builder. Such was the case with the 138-foot (42-meter) Sofia, built by Moonen Shipyards. 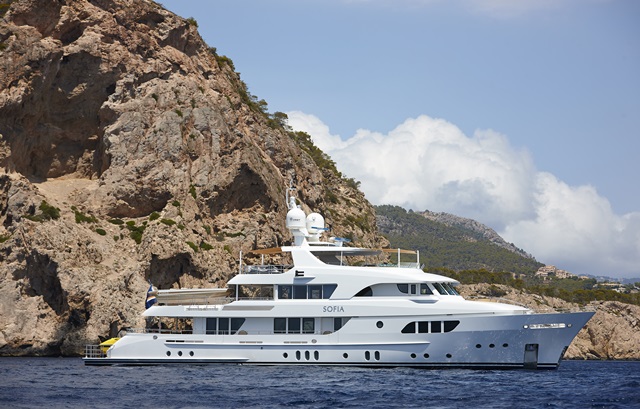 The owner, a repeat customer who previously had a Moonen 84 and Moonen 97, signed a contract for a 131-footer (40-meter) back in 2009. The new Sofia would also become the largest Moonen to date. The decision to tap Moonen again was easy. “My experiences with Sofia and Sofia II emphasized the quality of design and build of Moonen,” he says. “The yachts were safe, solid, and reliable even in rough weather. I welcomed many experienced sailors and owners onboard, and all were impressed by the construction quality, low noise levels, and immaculate carpentry work.” From the start, he wanted the new Sofia to tote a two-person sub. But when Moonen’s managing director, Emile Bilterijst, sea trialed such a sub in 2010, he realized the owner really needed at least a three-person craft, to guarantee two guest seats plus the pilot. 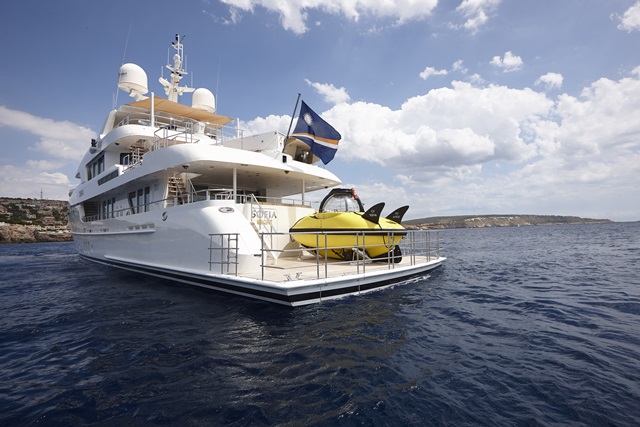 The switch to the bigger sub, a U-Boat Worx C-Quester 3 model, came 10 months after the megayacht was signed. It was 50 percent heavier, so Moonen, Rene van der Velden, and Stolk Marimecs increased her length and specified a heavier-capacity crane. That crane extends out from the swim platform and can be used as a boarding platform for the sub, too, meeting Lloyds classification and MCA standards.

Speaking of impressions, how’s this for a dramatic main deck? Art-Line Interiors, which built upon an initial interior design from van der Velden, emphasized open, flowing spaces with architecturally minded details. Unusual, eye-catching shapes and carvings are complemented by equally unusual materials like coconut paper. Zebrano, oak, and backlit stone columns. Also unusual: The settees (far aft of the dining area and bar in the foreground) are on rails, allowing for the owners and guests to shift them around easily for different experiences and views. 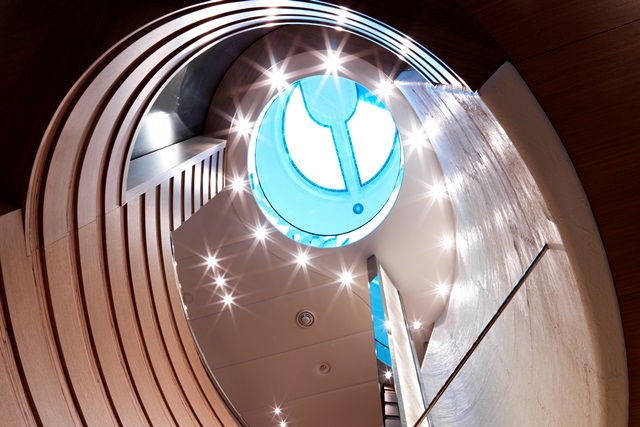 At Sofia’s center is a skylight-topped atrium, with spiral stairs leading throughout her decks and an impressive column of backlit stone (the vertical rectangle toward the right of the photo) rising through them. Something of this nature is a real surprise aboard a megayacht of Sofia’s size. The owner wanted to emphasize both the height and volume of his yacht and for the stairway to serve as a statement piece. Both goals certainly are achieved. 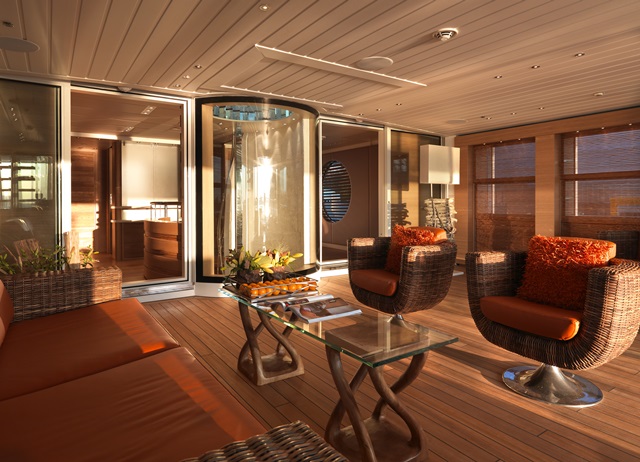 A popular feature aboard several Moonen megayachts (what the shipyard likes to call “pocket superyachts,” due to their smaller LOAs) is an alfresco lounge on the bridge deck. Sofia has this terrific teak-decked space, shaded by the upper-deck overhang. Sliding windows to both sides bring the breezes on in. Forward, just inside is a gym tucked to starboard, with an aft glass door that can be left open, as shown, to thematically connect it to the lounge. A small pantry a few steps away inside, by the wheelhouse, can service guests. 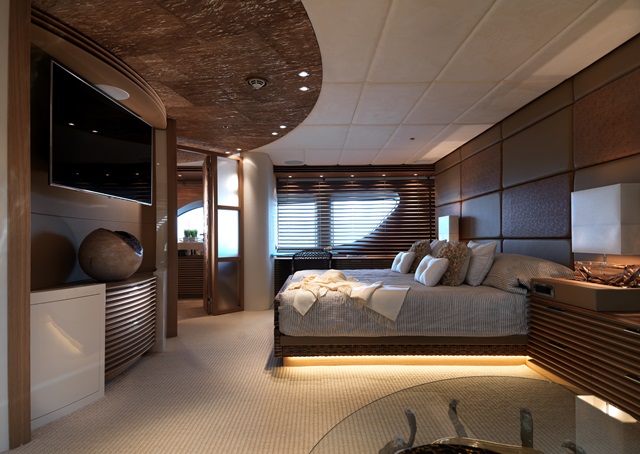 Guests and the owner enjoy the same decor scheme in all of their cabins, though of course the main-deck owner’s suite amps it up. That’s a wall of imprinted leather you see behind the bed, with wicker lining the bed frame. Just visible in the foreground is a seating area, given extra elbow room by shifting the bed farther to the port side. 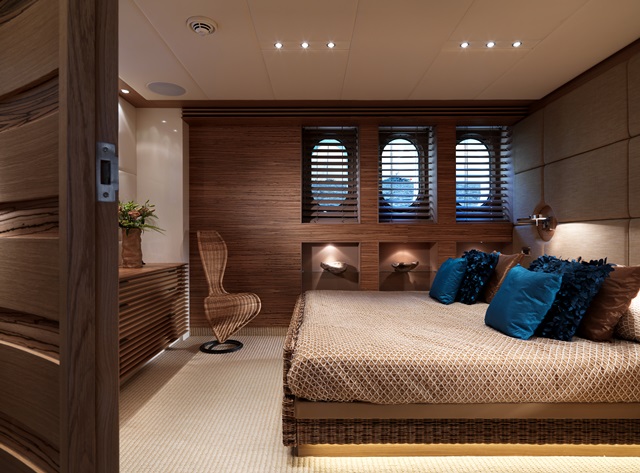 All four guest staterooms—two queens and two twins—below decks have a good deal of headroom. Art-Line Interiors and Sofia’s owner selected sandblasted oak for the doors to each stateroom, with a mix of oak and zebrano inside. 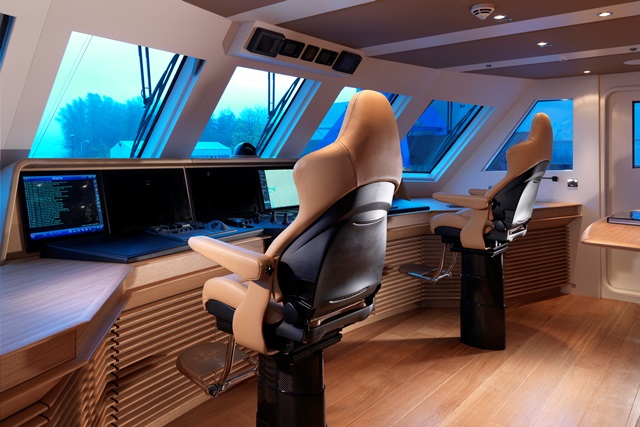 Since delivery over the summer, Sofia has been busy cruising and attending boat shows (the Fort Lauderdale International Boat Show is next on her itinerary). The owner’s captain reports Sofia to be a well-handling boat and of equal quality to other megayachts he’s helmed that were built by northern European shipyards of renown. Sofia reportedly achieved better-than-required sound and vibration levels during sea trials, too. For her specific classification under Lloyd’s, Sofia needed to have sound levels no higher than 50 dB-A (65 is the level of normal conversation) in guest staterooms. Moonen says 40 to 46 dB-A were the results, with the higher numbers coming from staterooms closer to the engine room. Here in the wheelhouse, sound level was 45 dB-A, compared to 60 dB-A being permitted. 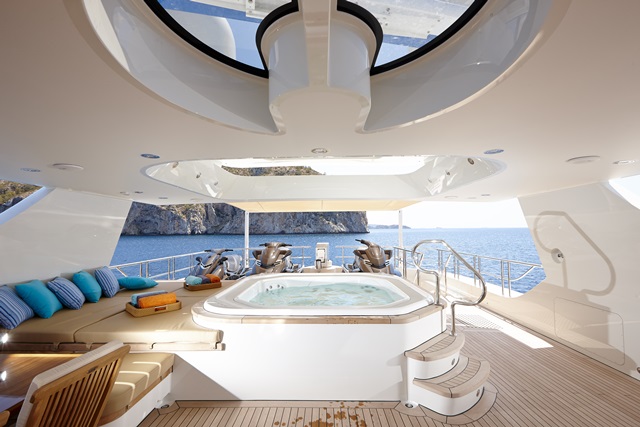 This is one megayacht that makes quite the impression. Sofia’s 470-ton displacement is deceiving, as she feels far more voluminous. She’s also far more detailed than most other yachts in her size range, which is dominated by semi-custom craft. Then there’s the deceivingly simple submarine setup. It all just goes to show that with some yachts, there is far more than meets the eye.