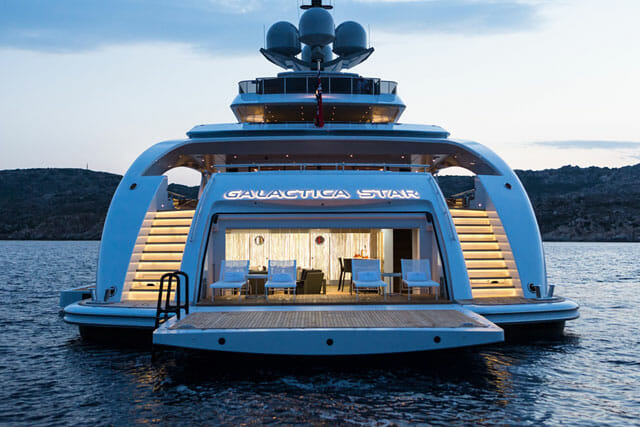 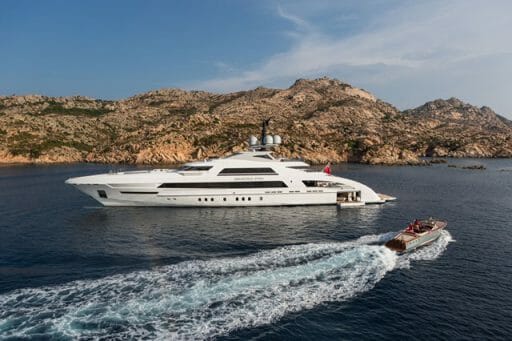 At 213 feet (65 meters), Galactica Star is Heesen Yachts’ largest megayacht to date. Heesen is known for its sleek, fast yachts, and Galactica Star is in keeping with that philosophy. But, the megayacht puts a significant twist on it. Sure, she’s capable of a reported 28-knot top end. But, Heesen says that Galactica Star does so while burning 20 percent less fuel than comparable megayachts. 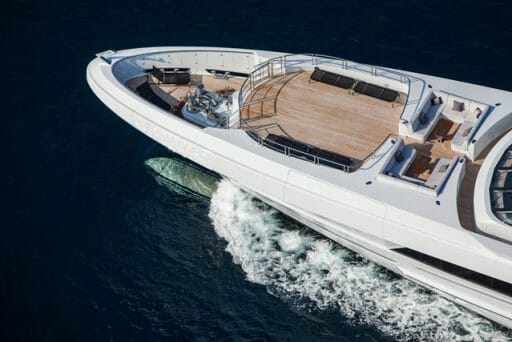 Galactica Star employs a hull design called the Fast Displacement Hull Form (HDHF), by Van Oossanen Naval Architects. A patented design, the FDHF blends the best attributes of a traditional displacement hull with those of a semi-displacement one. These attributes are low resistance and higher performance, respectively. The FDHF is also efficient through the entire speed range, rather than at figures closer to top end. By comparison, traditional semi-displacement designs hit a performance hump, where the transition from slower, displacement speeds to higher, semi-displacement speeds occurs. Van Oossanen Naval Architects says the FDHF performs 15 to 20 percent better at displacement speeds. How does this translate to Galactica Star? The megayacht has a reported top end exceeding 28 knots, powered by twin MTUs. She also is said to burn 20 percent less fuel than comparable other yachts and see a reported 4,200-mile range at 14 knots. 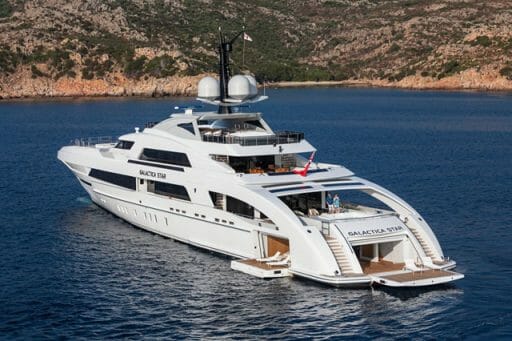 To complement Galactica Star’s different hull design, Heesen Yachts’ frequent naval architecture and styling partner Omega Architects worked with Van Oossanen. The goal was to convey a higher-tech look and feel yet still make Galactica Star look like she belongs in Heesen Yachts’ fleet. There’s a decided lack of overhang from the superstructure. Instead, the superstructure is self-supporting, positioned directly on the hull. 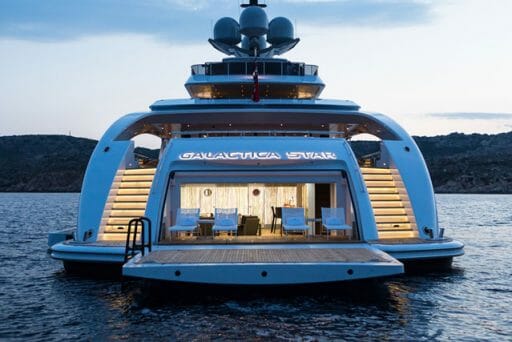 Even at the waterline, you can appreciate the unusual styling of Galactica Star. Of course, the megayacht still embraces the features that owners and their guests want, like a beach club. It occupies 829 square feet (77 square meters). It also gains more space via fold-down platforms to port and starboard (visible in the previous photo). 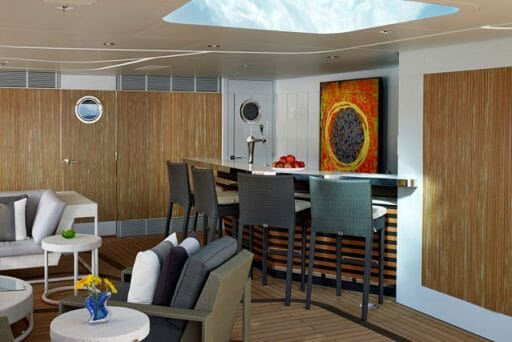 Take a look at the skylight just visible here in the beach club. It’s formed from the glass bottom of the hot tub on the main aft deck. Since Galactica Star’s beach club is permanent, not a tender garage that doubles as a guest spot, it’s fully air conditioned. A small galley lies beyond the bar, too. 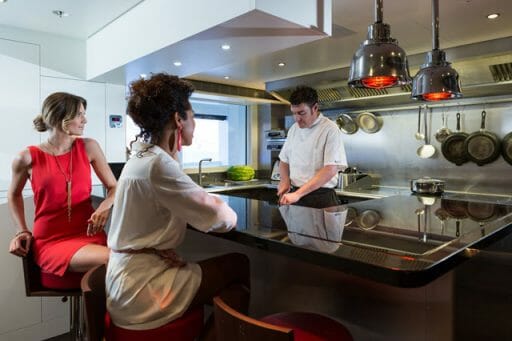 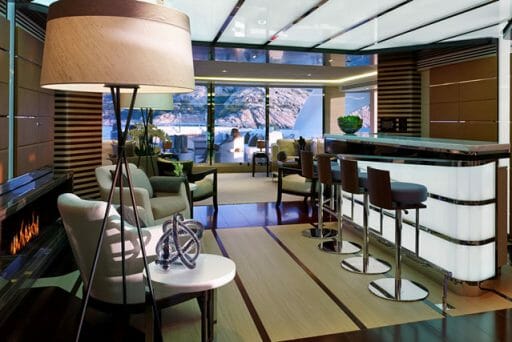 The dedicated guest spaces throughout Galactica Star are unquestionably modern, suiting a higher-tech megayacht. They reflect a combination of Macassar ebony, spruce, metal, leather, and stones, the work of Bannenberg & Rowell. Spaces are also sometimes arranged unconventionally, like here on the main deck. Rather than a typical saloon followed by a dining area, Galactica Star has a three-zone area. In the background, you can see a seating area directly at the aft-deck doors. It flows into this bar/lounge area, complete with a bioethanol fireplace. This in turn flows into the dining area. 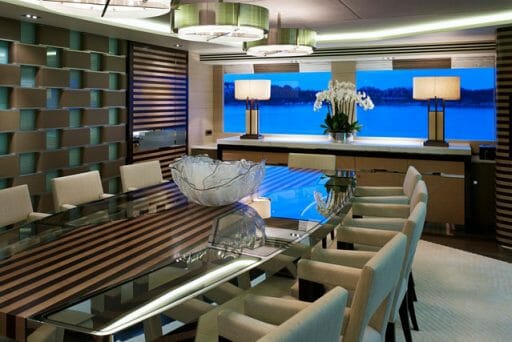 Speaking of the dining area, here it is. For a 213-footer—with a beam of 37 feet (11.3 meters) no less—it is far more typical to have either a separate dining room or one that is otherwise arranged to look and feel separate. In contrast—and successfully so—Bannenberg & Rowell have designed it to look and feel cohesively with the lounging spaces. 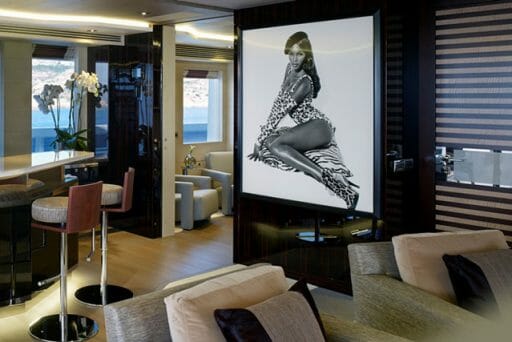 There’s also a cohesive relationship between the skylounge and alfresco seating/dining area, thanks to doors that can be left open. This makes for nearly 754 square feet (70 square meters) of entertaining space, for small gatherings and large cocktail parties alike. 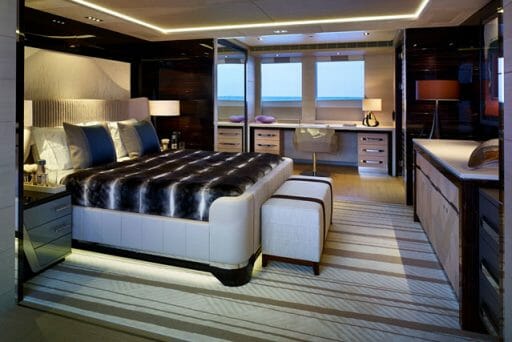 Come time to retire for the night, the owner of Galactica Star has, as you would expect, a main-deck master suite. Four double guest staterooms are below decks, while a VIP suite is on the upper deck. 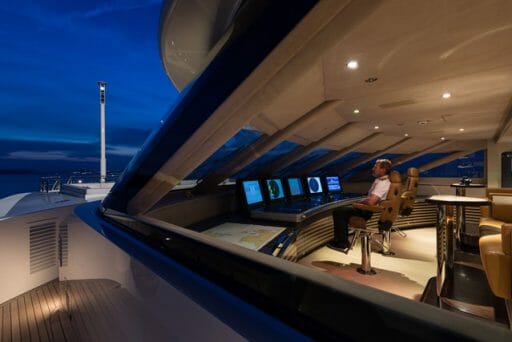 Being Heesen Yachts’ largest project certainly makes Galactica Star stand out. But the FDHF makes the all-aluminum megayacht far more noteworthy. Additional Heesen clients are grasping the significance of the design, too. Already, the builder has contracts and/or interest for megayachts from 148 to 230 feet (45 to 70 meters) employing it. It’s good to see design and build teams offer performance solutions that simultaneously preserve a little speed indulgence.