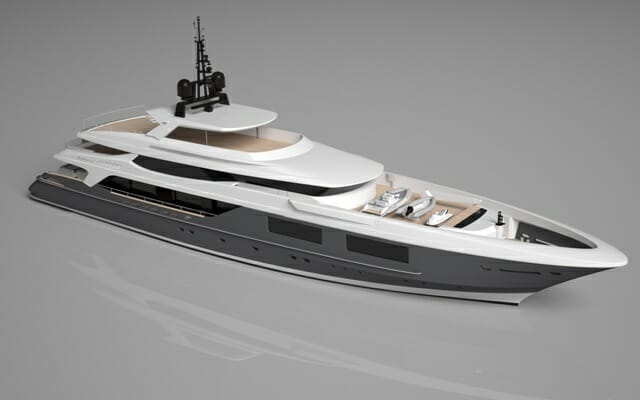 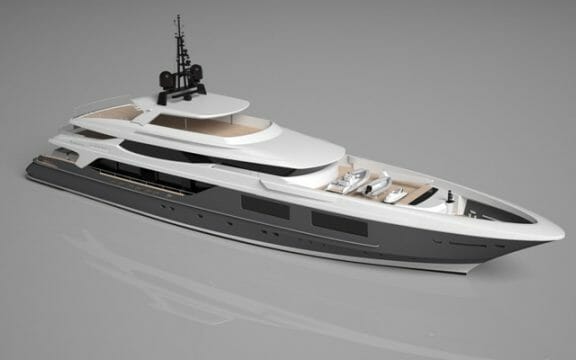 The Baglietto 54-meter bears design by Francesco Paszkowski Design. She’s somewhat similar in profile to a new 58-meter (190-footer) that the designer has created for the shipyard. It’s in keeping with a family feel that Baglietto wants for its Displacement Line. (The builder also has a Fast Line, with planing yachts.) Of course, the Baglietto 54-meter is further an extension of several 53-meter (174-foot) megayachts that the shipyard delivered in recent years. These include Baraka, Blue Scorpion, and Gitana, all launched between 2006 and 2009.

Since the Baglietto 54-meter is a displacement yacht, cruising speed should be 13 knots and top end should be 17 knots. The power package is twin Caterpillar 3512Bs. Anticipated range has not been revealed. However, if the larger Paszkowski Design megayacht is any indication, it’s likely close to 5,000 nautical miles.

No details are available for the interior of this 54-meter, either. Similar-size megayachts typically have four guest staterooms below decks and a main-deck master, with accommodations for about 10 to 12 crew.

Delivery is set for the summer of 2015, to a European buyer.

Baglietto, celebrating its 160th anniversary this year, currently has a larger Displacement Line megayacht undergoing tank tests. There are also 141- and 151-foot (43- and 46-meter) Fast Line yachts in build. A 125-foot (38-meter) Fast Line yacht is further in the works, in the design stage.