To the uninitiated, this photo may not look like much. To yacht watchers, it’s the exciting first step of many more to come. It’s the keel laying for Rainbow II, a replica of a famous schooner, to be launched in 2016 by Holland Jachtbouw.

The keel laying took place in early August, at Made Shipyard in The Netherlands. (It’s a common practice for Holland Jachtbouw to have hulls started at subcontractors’ locations.) That same week, Holland Jachtbouw first revealed plans for the project. Rainbow II will emulate the 1890s-era Rainbow, one of the greatest racer-cruisers ever built. Later known as Hamburg,Rainbowmeasured 197’10” (60.35 meters), including her bowsprit. She gained fame setting speed records and shocking her competition.

Rainbow II will measure 168’5” (51. 36 meters), designed by Dykstra Naval Architects. The person who commissioned Rainbow II will both cruise and race. In fact, following launch in summer 2016, Rainbow II will attempt to break the transatlantic record from New York to Lizard Point in England. The Performance Cruising Class 1 record for the 2,880-nautical-mile journey is 10.5 days. (The transatlantic record is broken down into different categories, such as hull type, singlehanded sailing, and more.) That record is held by the 152-foot (46.3-meter) Windrose, set in 2005. 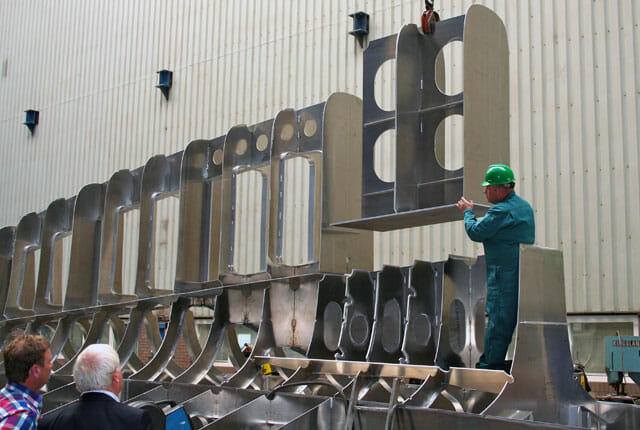 Rainbow II’s owner is no stranger to yachting, or racing. He currently owns the famous J-Class yacht Rainbow. He turned to Holland Jachtbouw to build her, too. If you’re familiar with the J, then you may recall she has a hybrid power system developed by Holland Jachtbouw. Rainbow II will feature a similar one. The system will be able to run all sailing gear and charge batteries simultaneously. The stored energy can then run gensets and other hotel loads silently at night. The hybrid system will also allow occupy less space than traditional power setups.

The freed-up space is sure to be appreciated by the owner and guests because of the dual emphasis on racing and cruising. While we do not yet know the interior configuration, an owner’s party of eight and seven crew will be aboard. The team at deVosdeVries Design will carry out the owner’s desire for an Art Deco interior. Mahogany wood will be prominent.

Wood will also be prominent on deck. Rainbow II will have wooden spars and blocks.