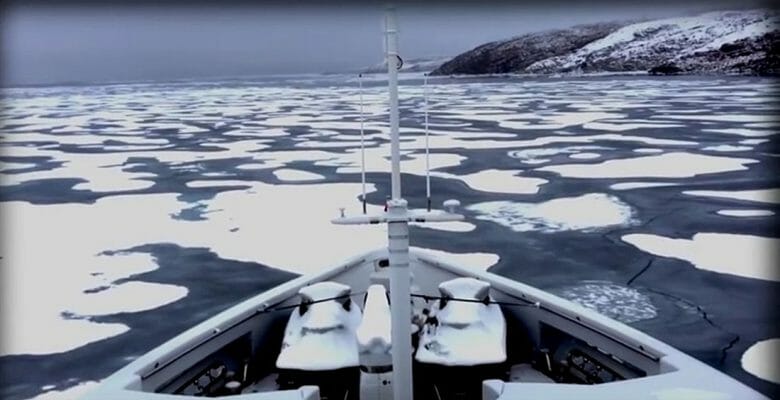 During the summers of 2014 and 2015, Latitude earned her place in an exclusive “club.” She became one of a handful of megayachts to traverse the infamous Northwest Passage. Better yet, she did so with a filmmaker onboard—and the mini-documentary which resulted, recently released, is embedded below.

The 152’6″ (46.5-meter) Latitude doesn’t look the type to undertake the challenging and dangerous Northwest Passage. When you realize she’s designed by Vripack, however, you realize the looks are deceiving. The studio designed the first superyacht to make this very same voyage, that being Turmoil (now Pioneer) in 2001. Four additional Vripack-designed megayachts have made the trip since then, among a total of nine overall to cross the Passage.

If you’re not familiar with the Northwest Passage, it lies 500 miles north of the Arctic Circle and approximately 12,000 miles from the North Pole. It spans 3,000 miles, connecting the Atlantic and Pacific Oceans. Often frozen solid, except for short periods in the summer, it’s characterized by difficult channels and shoals. The draw for megayacht owners is to take on the challenge, but also to see the magnificent ice formations and wildlife.

The latter was the mission for Anil Thadani, the owner of Latitude. He and 17 others headed north from the U.S. East Coast in July 2014. Latitude completed the arduous crossing in 116 days. It’s key to note that she did so while encountering an inordinate amount of ice. And, it’s equally key to note that Latitude did it all over again just this past summer, this time making the journey from the Pacific Ocean side to the Atlantic. That route is considered far more challenging.

The following mini-documentary chronicles these history-making travels of Latitude. The scenery, shot both above and below the water, is awe-inspiring.