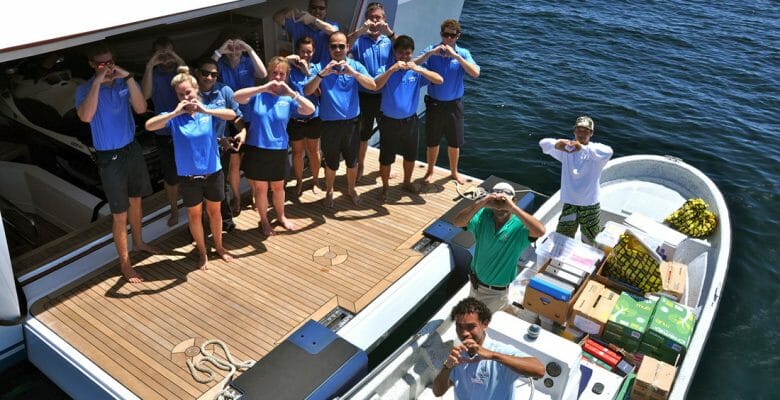 Charitable organizations understandably rely on the generosity of donors. YachtAid Global is banking on a new online fundraising campaign to broaden its impact on remote communities. The goal is to garner the assistance of both the yachting community and the general public.

YachtAid Global’s fundraising campaign is being hosted via Crowdrise. Crowdrise is a high-profile platform solely for charitable giving and positive social missions. Its major partners include the Red Cross, UNICEF, the Boston Marathon, and a number of recording artists and actors. (Actor Ed Norton is among its founders.) In 2010, Crowdrise was #13 on Barron’s magazine’s annual list of high-impact givers.

YachtAid Global created the Crowdrise campaign to allow megayacht owners and crew to support initiatives without the use of their yacht. Recall that YachtAid Global organizes aid delivery via yacht to remote coastal communities worldwide, for developmental benefits and/or following natural disasters. Logistical efforts go beyond the actual transport of food, fresh water, clothing, and more. Aid items need to be acquired, for example. By donating via Crowdrise, owners, crew, and charitable-minded people in general can help YachtAid Global continue to help make a difference.

And what a difference it has made thus far. In its decade of operation, YachtAid Global says it has sent resources to more than 20 countries. It’s happened with the assistance of more than 40 megayachts and about 400 crewmembers. All told, YachtAid Global says more than 100,000 citizens worldwide have benefited. Last year, the yachts Dragonfly and Umbra headed to Vanuatu to make potable water and provide medical and other humanitarian help, following devastation by Cyclone Pam. In 2013, the crew of Lady Lola (pictured) delivered school supplies to communities in Panama. And in recent weeks, YachtAid Global has been working with other agencies to assist the people of Fiji, who were hit by Cyclone Winston in February.

YachtAid Global’s Crowdrise campaign accepts donations both large and small. Furthermore, you can spread the word via Facebook and/or Twitter directly from the fundraising page.