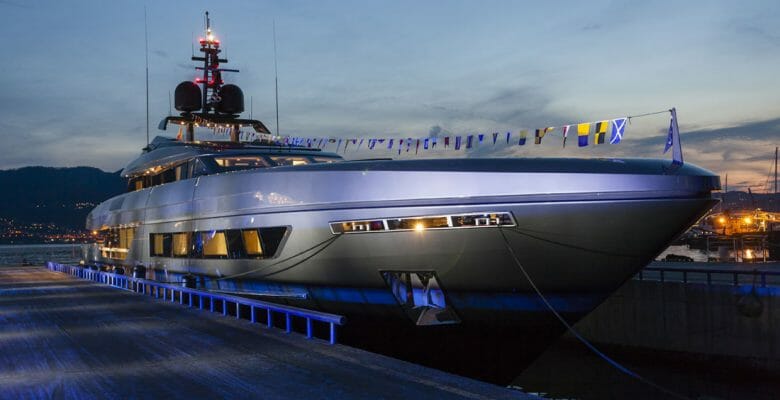 Sunset means the end of the day. But on May 7 it was the dawn of a new day, so to speak, for Baglietto. The yard’s management and craftspeople, plus media and dignitaries from the yard’s home city of La Spezia, Italy, gathered at that time to watch the first 46m FAST (151 feet) slip into the water.

The model name hints at the expected performance of the all-aluminum megayacht. Baglietto says top speed should be 28 knots, powered by twin MTU 16V 4000s. It’s a nod to her heritage, too. Previous Baglietto yachts have been known for good turns of speed. Rather than reinvent the proverbial wheel, the yard decided the 46M FAST should be a modernized version of some of those deliveries.

In keeping with current tastes, the 46M FAST bears a good deal of glass along the main and lower decks. The look comes from Francesco Paszkowski Design, which also penned a sleek, familiar profile. Naturally, alfresco areas are emphasized as well, particularly the teak-laid upper deck. Dining, sunning, and general lounging can all take place up here.

Francesco Paszkowski Design and Margherita Casprini tended to the interior design, too. Here, the 46M FAST follows a customary configuration. Four guest staterooms complement the main-deck master stateroom. The captain gets housed aft of the wheelhouse, while eight crew get cabins below decks. The 46M FAST features contrasting tones of rich rosewood and white-lacquered paneling and overheads.

You’ll get a chance to see the 46M FAST at the autumn boat shows. She’ll debut at the Cannes Yachting Festival. Following that, she’ll appear at the Monaco Yacht Show.