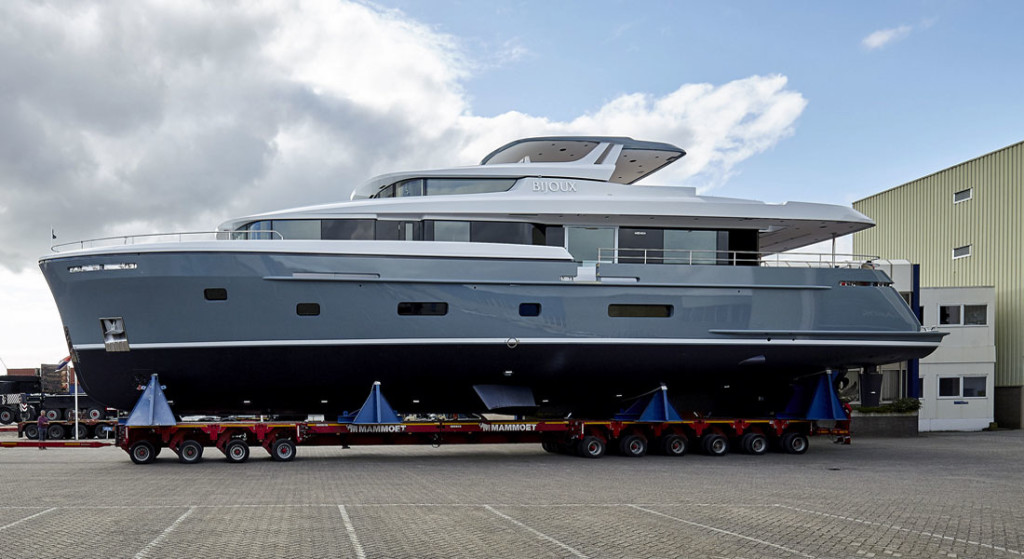 Made for shallow-water cruising, the Moonen Matica series has seen its first launch. Bijoux is the name of the first 98-footer (30-meter) in this semi-custom series.

The owners were on hand for the megayacht to emerge from her build shed. They have visited the Dutch shipyard a variety of times during the two-year construction process. Among the things they will use frequently aboard Bijoux: the beach club. No previous Moonen megayachts have had this feature. A stairway to starboard will let the owners and guests reach the beach club from Bijoux’s main deck. What’s more, the swim platform is oversize, plenty big for guests to go swimming and board the 16-foot (5-meter) tender typically stowed in the beach club. The swim platform further retracts completely.

Speaking of guests, Very Important People will get a main-deck stateroom. It’s unusual to have this with a below-decks master. But, the master is full beam aboard Bijoux. It’s accompanied by two more guest staterooms.

Adam Lay Studio collaborated with the owners to ensure all guests, including the owners’ teenagers, enjoy a modern, calm atmosphere. Bleached oak is used for soles. Bijoux also has walnut furniture and paneling, the latter mixed with fabrics in some spots.

The raised-pilothouse Bijoux bears design by Rene van der Velden and naval architecture by Diana Yacht Design. (This holds true for the full Moonen Caribbean series as a whole, which includes the Matica. The rest of the Caribbean series: Mariana, Montserrat, Mustique, Martinique, and Marquis. A Martinique is in build and available for sale.)  Moonen and the design studios created the series to emphasize range, efficient cruising, and good sound and vibration control. They also intend to attract more international buyers.

The buyers of Bijoux had considerable input into her overall design and layout. Even though they are not planning to take the helm themselves, they checked out the sightlines from the wheelhouse and flying-bridge helm at the launch ceremony.

Work will continue on completing Bijoux by the end of June.