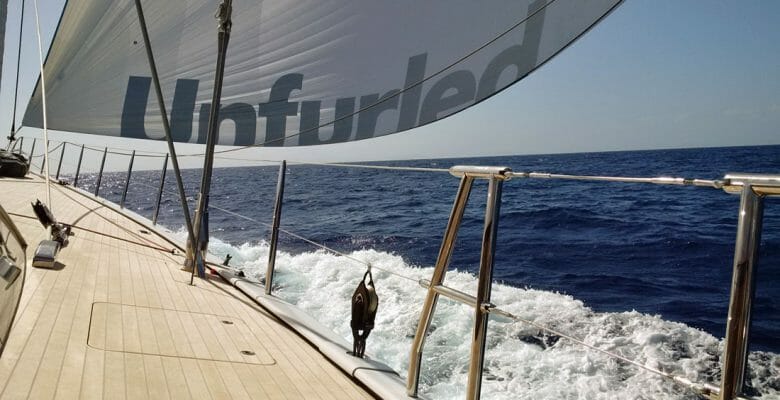 Experienced yacht owners often bring abundant ideas to the table. When those customers have owned three previous fully custom yachts, though, they bring more than ideas. The owners of Unfurled conceived her as the culmination of a lifetime of racing and global cruising. They also commissioned the sailing superyacht as proof that restrained aesthetics can and do pair well with performance-oriented purpose.

As they did with their previous yacht, also christened Unfurled, the owners turned to Frers Naval Architecture. They’ve cruised and raced aboard that 112-foot (34-meter) sailing superyacht since 1999 and therefore trusted the Frers team with ensuring the new yacht would be a performance cruiser. The new Unfurled also needed to be bigger, at 151 feet (46 meters), with a clean, pure design, both inside and out. “We believe elegance and restraint in design should result in a yacht that is timeless,” the owners say.

Performance and purity of design come together aboard Unfurled in some noteworthy ways. Besides having a lifting keel, she has some original features created in-house by Vitters Shipyard. Among them are two lightweight, retractable pod drives (below) for thrust. Podded propulsion is more efficient than traditional propeller-driven propulsion. Retracting them eliminates drag, too. Until recent years, a system such as this would never have been incorporated on a sailing superyacht. Vitters additionally developed pop-up bollards, a deck-concealed winch pit, and what it claims are the world’s largest twin carbon fiber rudders. They provide much more control when Unfurled is heeling. Last but not least, the owners wanted Unfurled’s steering system to be light to the touch and require just four turns lock to lock. 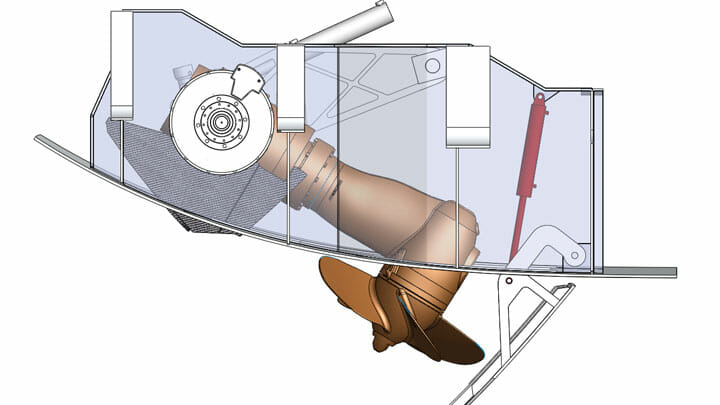 The marriage of technology and artistically pure design is a Bauhaus concept, something the owners stressed to interior designer Oliver Stirling of Stirling & Co. The owners are intimately familiar with architecture, materials, and more, too. Inside Unfurled, sycamore paneling and overheads, white marble soles, and metal are the primary materials. The designer and owners played with simple shapes throughout. Both vertical and horizontal planes of sycamore, stone, aluminum, and even glass are interrupted by grills, shadow gaps, and lighting. The idea is to call attention to them, while also let spaces flow from one to the next. All spaces, from the crew’s quarters forward to the full-beam (32-foot, or 9.8-meter) owners’ suite aft, feature the materials and treatment. The effect is quieting and refined.

The owners say the past three years of collaborating on the creation of Unfurled has been gratifying. “We look forward to cruising with friends and family, as well as competing in highly competitive superyacht regattas,” they add. “We have more than surpassed our goals.” No doubt: In March, Unfurled took the trophy among the Pursuit Class competitors in Les Gazelles des Mers at the St. Barths Bucket.