You are here: Home / Yachts / Motoryachts / Mangusta GranSport 54 Goes From Concept to Construction 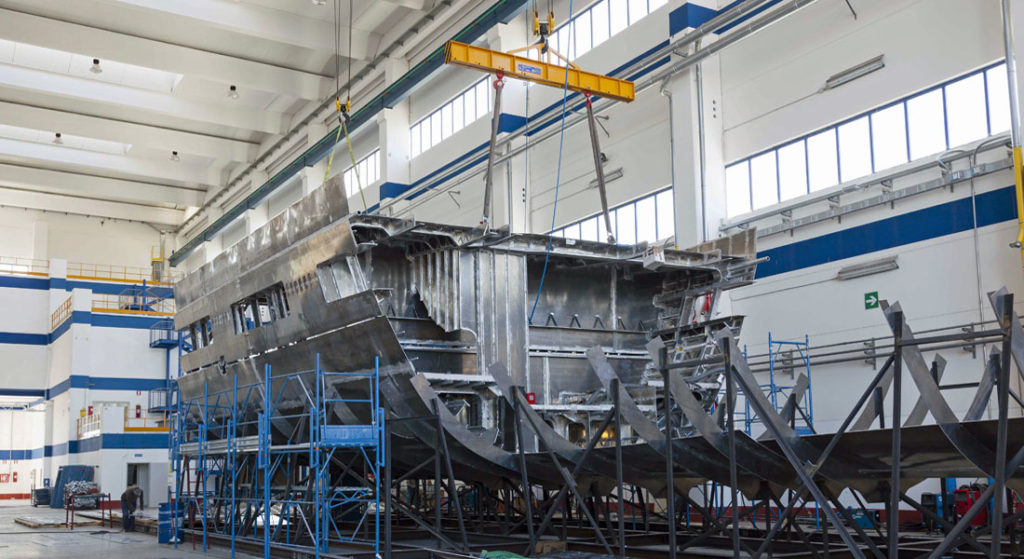 A year after Overmarine Group revealed the Mangusta GranSport as a concept design, it’s building hull number one for a customer. The fast-displacement megayacht is a 177-footer, a GranSport 54.

Fast displacement is new for the builder, but not the industry. You may remember it’s a hull design offering more efficient fuel consumption through the full speed range compared to semi-displacement designs. Overmarine Group says the team, with designer Alberto Mancini, conducted tank tests and additional study after unveiling the initial concept. That initial concept was for a GranSport 48, or 154-footer. Besides growing, the Mangusta GranSport 54 also now incorporates quadruple 2,600-hp MTU engines. Previously, twin MTUs were planned. The additional power pushes top speed to 30 knots, from 26, without, Overmarine Group says, compromising efficiency. In fact, it says there’s better fuel burn particularly at lower speeds.

Remaining unchanged is the best range of 3,800 miles, likely around 12 knots. The Mangusta GranSport 54 further still features zero-speed stabilizers and a shallow draft, about 8’2” (2.5 meters).

Further remaining unchanged: The GranSport 54 keeps the sleek family look of Mangusta maxis. The megayacht additionally emphasizes alfresco living, and is being tailored to the buyer’s wishes inside and out. Overmarine Group isn’t yet revealing what the client requested. With the original concept, the megayacht had nearly floor-to-ceiling glass in the saloon. Speaking of glass, a glass-bottomed hot tub sat up at the bow, spilling light down into the master bath. The raised-pilothouse design also included a beach club and dining for 10 on the flying bridge.

Hull number one of the Mangusta GranSport 54 debuts in 2018.