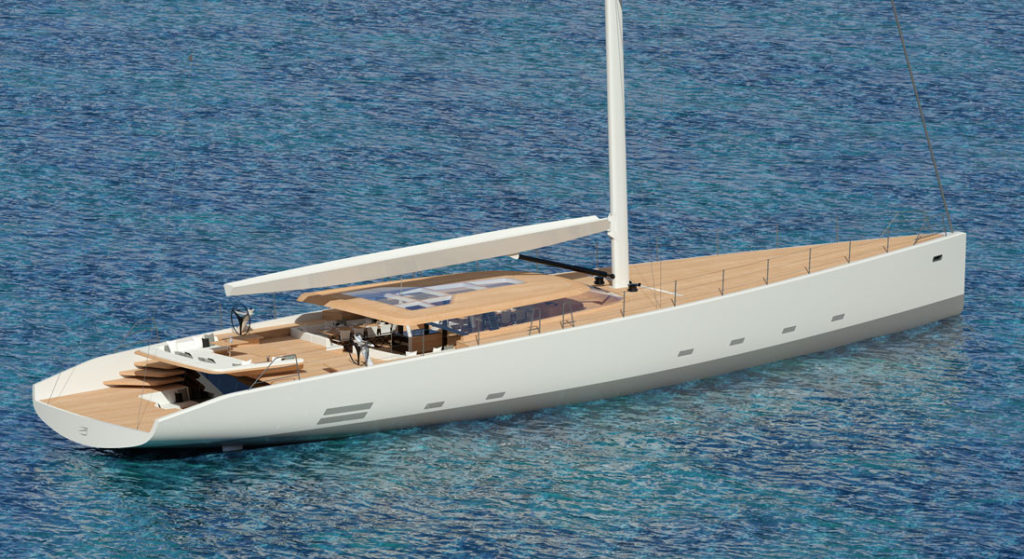 Meant to take on global cruising whether in light or heavy air, a new 145 from Wally is in build in Italy. In keeping with Wally tradition, while she’s for family time, she’s primarily for beating the competition. More interesting, though, in stark contrast to typical buyer behavior, this Wally 145 started off far larger. She decreased in both length and complexity.

According to German Frers of Frers Naval Architecture & Engineering, the owners initially believed bigger was better. However, as experienced as the husband particularly was, he embraced a smaller, simpler design “in search of agility, speed, and a closer vicinity to the sea and the elements.” “Extensive research,” Frers adds, proved a 145-foot (44.2-meter) LOA would deliver the desired performance and handling, lightest logical weight, and three distinct deck areas.

Wally says the Wally 145 will perform in even just 6 knots of wind, yet remain stable in strong ones. It’s partly possible due to a higher-than-normal sail area to displacement ratio. She’ll carry nearly 11,173 square feet (1,038 square meters) of sail upwind, for example. Downwind, it’s 21,183 square feet (1,968 square meters). Light displacement is 171 tons. Wally says employing carbon fiber makes her about 100 tons lighter than others of her LOA. 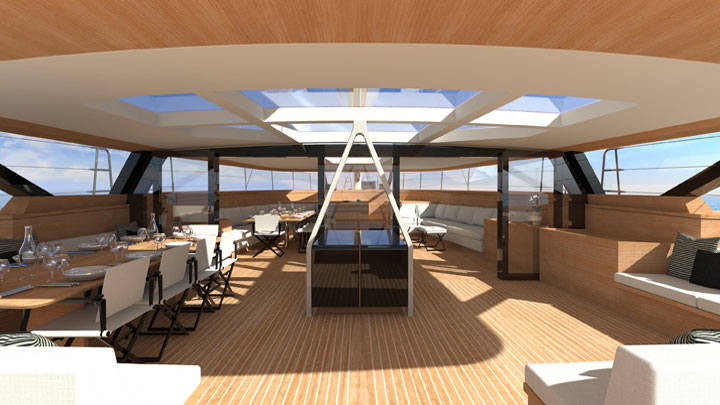 The planned performance is further possible, of course, due to the hull shape and lifting keel. With the keel fully lowered, draft is 23’6” (7.2 meters). Retracted, it’s 14’8” (4.5 meters). Additionally of note, the Wally 145 should perform well under power. A 15-knot cruise speed should come from the hybrid propulsion system. Twin MANs combine with twin electric motors connected to retractable shafts. Further part of the hybrid setup, a DC-BUS system and lithium batteries can power the hotel load for a peaceful night’s sleep. If the Wally 145 enters sensitive waters, she can rely on the electrical engines and bow and stern thrusters for station keeping and all maneuvering.

As for the deck areas, the Wally 145 echoes an inside-outside arrangement (above) of previous Wallys. No steps separate the saloon from the guest cockpits, for example. One of those cockpits is covered, too, while the other one is entirely alfresco. In a Wally first, this Wally 145 has a third cockpit, reserved as part of the owners’ area.

The owners’ area includes two queens and a his-and-her head, plus an office. Guests get two staterooms, each with twins and Pullmans. Droulers Architecture and Studio Sculli are responsible for interior design throughout. No details are known.

Set for launch in May 2019, the RINA-classed Wally 145 is in build at Persico Marine, in Massa Carrara. The shipyard focuses on advanced composite construction.