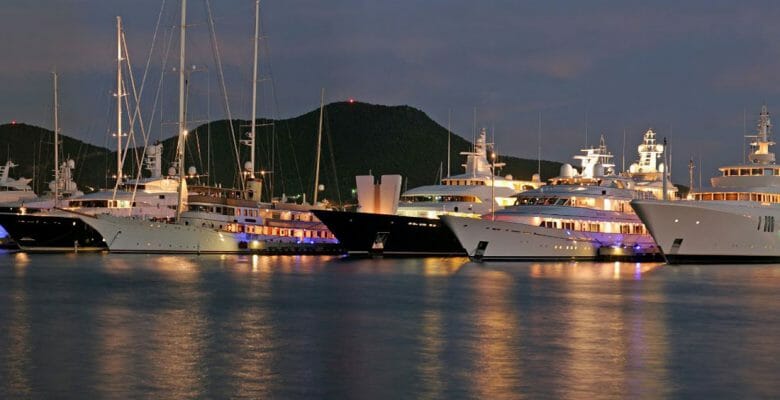 IGY Marinas, which operates the properties, does say that storm cleanup is ongoing. Isle De Sol (above, pre-storm), for example, has 18 of 38 megayacht slips available. It expects another seven to be ready by Christmastime. At Yacht Haven Grande (below, pre-storm), yachts occupy nearly 70 percent of slips. The D dock area is not yet fully available. Regardless, “We are very excited to have both Yacht Haven Grande and Yacht Club Isle De Sol open for business this season, thanks to our amazing teams!” comments Bert Fowles, IGY Marinas’ vice president of marketing and sales.

IGY Marinas additionally has details on local provisioning companies and service providers. Many markets are open and delivering on each island. National Marine Suppliers, on site at both Isle De Sol and Yacht Haven Grande, is operating, too. As for fueling, the fuel docks at both marinas are operational. Workers are still restoring in-slip fueling at Yacht Haven Grande. But, IGY Marinas indicates that the lines, pumps, and other equipment are in good working condition. In addition, “fuel restocking is readily available from our jobber, and they’ve guaranteed no interruption in delivery capability,” according to its website. 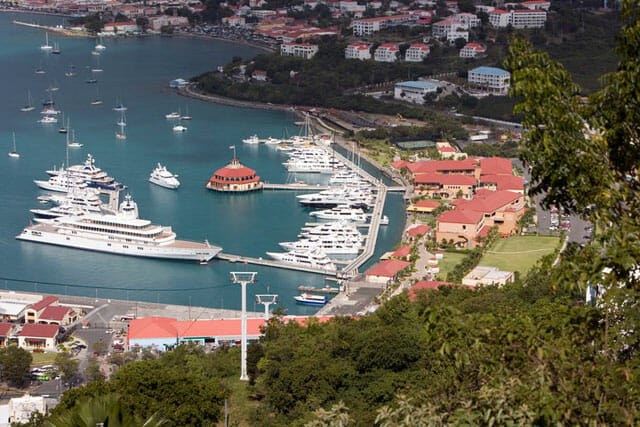 Marina guests typically venture elsewhere on the islands, of course. Therefore, IGY Marinas paints an overall picture of St. Maarten’s and St. Thomas’ recovery to date. In St. Maarten, signs of storm damage still exist, “but the major infrastructure like roads, electricity, water, Internet, telephony, etc. are all in place, so life is quite normal,” it indicates. Simpson Bay, home to Isle De Sol, “is the best part of the island at the moment, with dozens of stores, restaurants, pharmacies, doctors’ office, and other businesses up and running.”

St. Thomas, meanwhile, “has rebounded incredibly well,” the company reports. “Driving around, one sees less and less evidence of the storms every day.” Cell service is “largely restored,” while reportedly a bit more than half the island has electricity, “increasing daily.” In addition, diving, snorkeling, and related specialty companies are running trips every day. Restaurants, delis, and beach bars across the island are open.

IGY Marinas is careful to not paint a picture of full recovery just yet. “Many of the docks at (Isle De Sol) and on SXM in general were damaged by Hurricane Irma, and several docks still have sunken vessels in them,” the website reads. The company strongly recommends reserving slips in advance due to a shortage of space in general on St. Maarten. Yacht Haven Grande is debris-free. But, other St. Thomas marinas are not, so Yacht Haven Grande has high inquiries.

On a related note, IGY Marinas’ Simpson Bay Marina is preparing to reopen to megayachts as well. As of press time, it can take 25 yachts up to 70 feet (21.3 meters) LOA.

Check with IGY Marinas for full details on all its properties. We’ll update this story as more information becomes available as well.