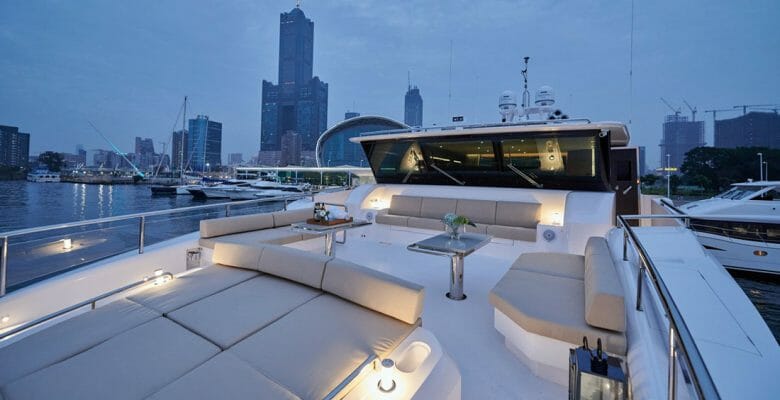 Amid VIP customers of Horizon Yachts and select invited media earlier this month, including MegayachtNews.com, Skyline premiered in Taiwan as the first Horizon FD87. Based on the Horizon FD85, she’s not simply a longer yacht. She’s tailored top to bottom far more than most semi-custom megayachts—much more than most builders will allow, in fact.

When Horizon announced Skyline in January 2017, the shipyard introduced the Fox family, the owners. Dad Travis, mom Trina, and two daughters were stepping up from a 50-footer. At Horizon’s Open House days this month, the media sat down with Travis Fox, Horizon CEO John Lu, and designer Cor Rover of Cor D. Rover Design. Rover commented that it’s a pleasant surprise to see a “small” megayacht ticking the same boxes as far larger ones. “A 50-meter has five staterooms; so does this,” he says. “A 50-meter has a master on deck; so does this.” Lu added that in general, buyers are beginning to understand, and therefore value, the importance of volume versus length. 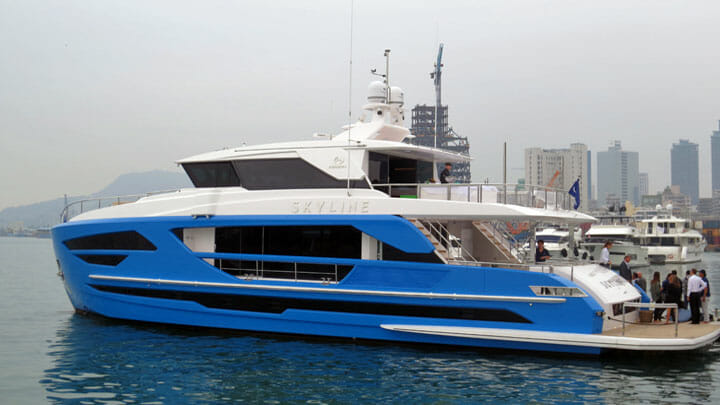 Speaking of length, while Skyline devotes most of her extra space to the beach club, Fox isn’t exaggerating when he says he had input into “everything” onboard. As an engineer, he had insight into operational matters, not just aesthetic ones. Equally noteworthy, he says “there was no bait-and-switch on change orders,” something he’s experienced elsewhere. From larger ports, to an internal floating stair, to an automatic closure between the galley and saloon, Skyline has abundant differences. Fox says he thoroughly enjoyed the design and build process, and it shows. Lu equally enjoyed working with Fox. In fact, “With some clients, you have to say, ‘That’s not going to work.’” The need never rose this time around.

Skyline makes her official global debut at the Palm Beach International Boat Show in March. We’ll have a full Megayacht News Onboard feature later this spring. We’ll also explain why Horizon is using “Skyline,” with the Foxes’ permission, for some upcoming models.