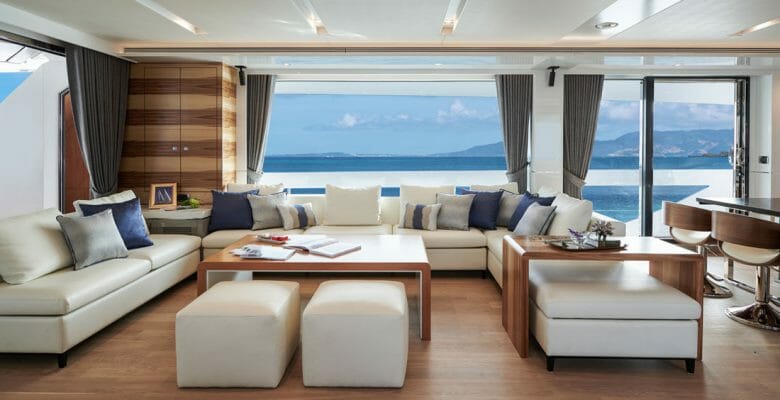 “I will really miss these guys,” says Travis Fox, looking over at John Lu, head of Horizon Yachts, and a few of the engineering and sales staffers. We’re sitting in the saloon of Skyline, the first FD87 in Horizon’s Fast Displacement series. Travis and his wife Tina commissioned Skyline as a family yacht, an experience in which he says he had input into “everything,” from design features to fuel capacity. Equally important, he thoroughly enjoyed it. So, too, does Horizon say it enjoyed working with him. In taking a closer look at the megayacht, it’s easy to understand the mutual sentiments.

For starters, consider how Skyline came about. The Foxes had seen the Horizon FD85, which the builder created with Cor D. Rover Design. They liked her emphasis on efficient cruising, due to what Horizon calls a High Performance Piercing Bow. In brief, this permits better performance at both the low and high ends of the speed range. Additionally, the Foxes liked her general space utilization. However, they prefer a skylounge with a helm versus the FD85’s open bridge. Furthermore, they wanted a beach club. Cor Rover of the eponymous studio got to work on changing the FD85 to suit them. Fourteen months later, Skyline was in the water. 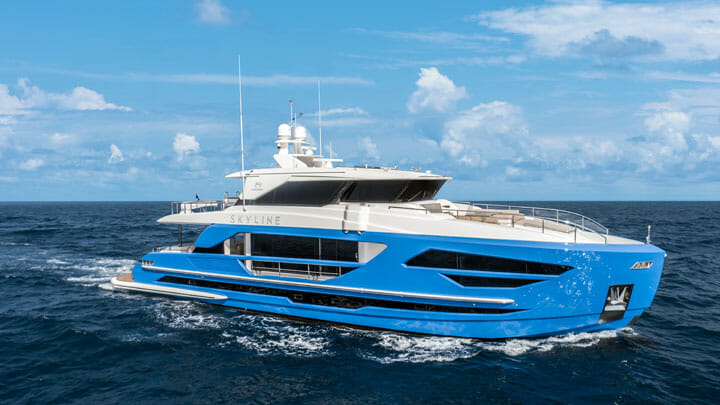 While the beach club pushed the megayacht’s LOA to 90 feet (27.5 meters), other custom requests are readily visible, too. Skyline has larger ports overall compared to the FD85, for example. In addition, a big port spans the transom, benefitting the beach club. The Portuguese bridge and bow seating area further came at the Foxes’ requests. 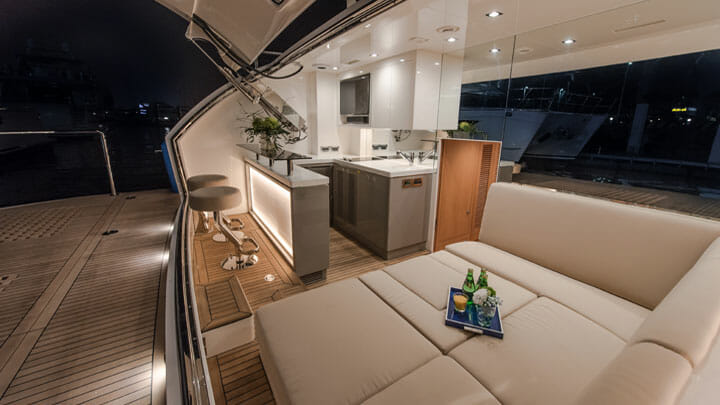 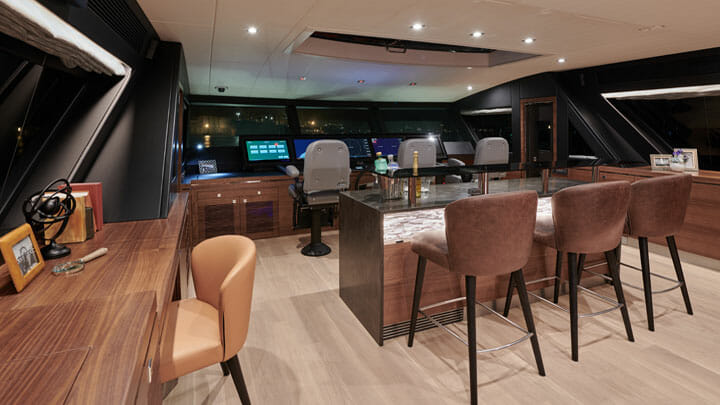 While the Fox family put a lot of thought into each room onboard, Travis’ favorite area is the skylounge. Jokingly called his man cave, it has a bar, with a backlit front panel, and darker, richer tones than the rest of Skyline. However, the so-called man cave is actually the family cave. Consider that the Foxes’ two daughters each took the wheel of the family’s previous 50-footer. They’ll do the same with Skyline, which is meant as a primarily owner-operated yacht. 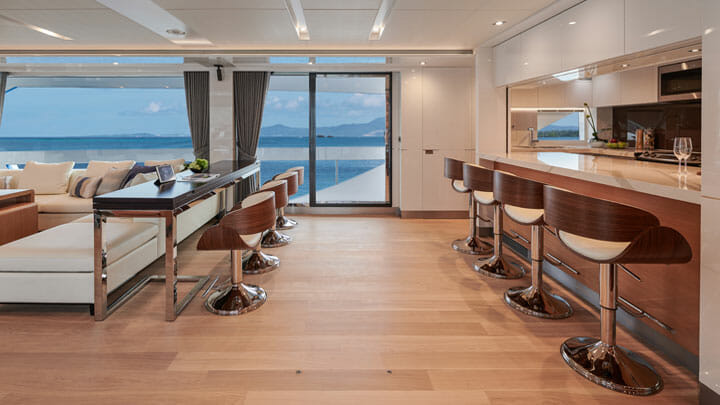 The list of special requests goes on and on. For instance, the saloon has a breakfast bar and fold-up dining table (seeming like another bar above). The pass-through from the galley can close at the press of a button. Through them all, Horizon enjoyed working with the Fox family. Roger Sowerbutts, Horizon Yacht USA’s director, appreciated Travis’ engineering background. “With some clients, you have to say, ‘That’s not quite going to work,’” he explains. By contrast, that conversation didn’t take place with Travis. When Travis offers, “I don’t remember Horizon ever saying no,” John Lu backs him up. He further comments, “Some yards have zero flexibility; there are few options.”  With Horizon, he adds, the approach is “why not?”

And, why not name a version of the yacht in honor of your customers? Horizon requested, and received, permission to term all skylounge-equipped FD models as Skyline versions. If that’s not admiration, we don’t know what is.