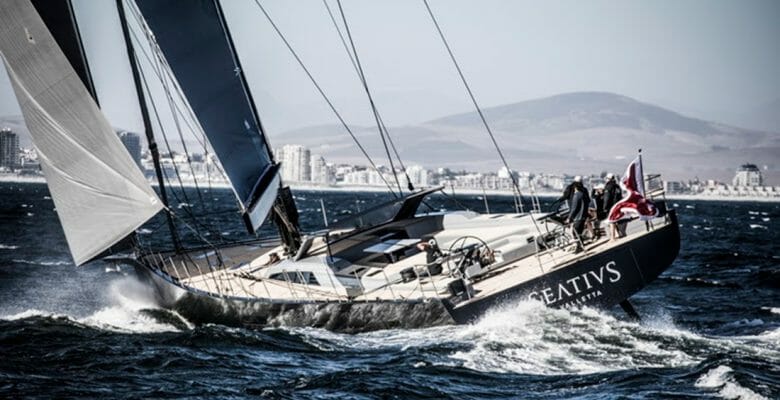 Latin is a dead language to some. However, to Southern Wind Shipyard and the owners of Seatius, it’s alive and well. The name of the newest SW96 is a play on the Latin word citius, meaning “faster.” Furthermore, she departed the yard with the staff wishing her “Citius! Altius! Fortius!” Translated, this means “Faster! Higher! Stronger!” Those three words sum up what the owners wanted in commissioning this second hull in the SW96 series.

In fact, the owners wanted to pursue global cruising with a somewhat small crew. They got a strong performer, judging from their delight during sea trials, which followed Seatius’ launch in March. In fact, one of the owners was onboard for those trials, averring that she handled well with fewer than normal hands. (Seatius has a double captain’s cabin plus two crew cabins.)

Interestingly, it took several personal onboard experiences with other Southern Wind Shipyard yachts to get to this point. One of the owners began speaking with the yard several years back. He visited the shipyard, plus chartered a few of its yachts in the Med as well as in the Caribbean. Then, he further raced in the RORC Transatlantic aboard a Southern Wind. Finally confident he was making the right shipyard selection, he reviewed models. Jim Schmicker of Farr Yacht Design, which created the SW96 concept with the yard, explains, “As soon as he saw the drawings…he was won over.” 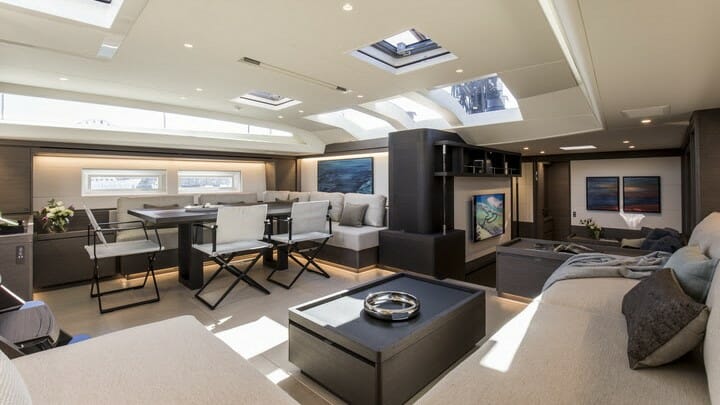 That includes performance features. With an LOA of 96’1” (29.3 meters), Seatius has a lifting keel and twin rudders. Schmicker asserts, “For performance and ease of handling, they are superior to a single rudder.” He adds that they permit creating huge stowage, too. On deck, when heeling, the sailing superyacht makes it easier for guests to brace themselves. In contrast to the first SW96, Sorceress, Seatius has a passageway between two sunning areas. In general when sailing, the passageway also prevents them from having to scramble over things when moving about. Nauta Design created this as well as other deck-layout and interior-design features.

Also in contast to Sorceress, the new superyacht has a hardtop dodger. It covers the dedicated guest cockpit. This, as well as additional biminis, can stow away when wanted—or needed for performance if Seatius ever races.

As for the interior, Seatius differs here from Sorceress as well. She has three, instead of four, staterooms. The owners’ suite sits forward, with a VIP just aft of it. The third guest stateroom is a twin, sitting aft of the saloon. The cabins, saloon, and adjacent TV lounge feature both light and dark woods. (These, and other décor items, came from the owners’ longtime designer, Jeroen Machielsen. He worked with Nauta Design for the project.)

While Seatius has set sail from South Africa for the Med, you’ll get a chance to see her personally. She’ll exhibit at the fall superyacht shows.