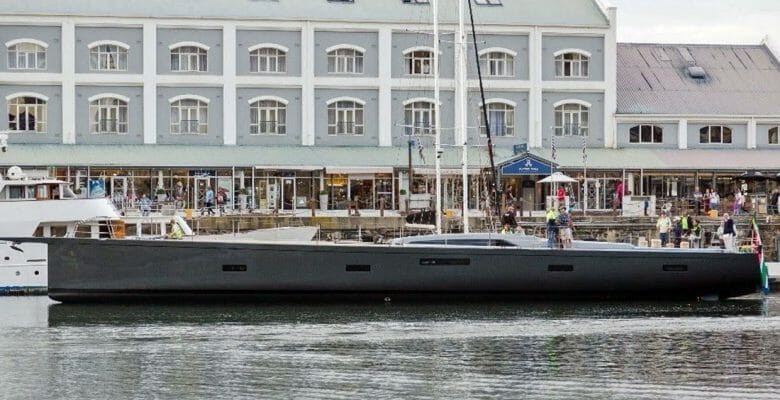 The last thing anyone wants for a superyacht launch is a rainstorm. But the rain that fell just before Seatius launched at Southern Wind Shipyard was a good thing. The builder’s home of Cape Town, South Africa is in the midst of a prolonged drought. Combine it with the “rain” of champagne that fell across her during her christening, and Seatius was set for bright days to come.

Seatius is the second launch in the SW96 series, which also includes Sorceress, delivered last year. Unlike Sorceress, though, which is for racing, the owners of Seatius are set on bluewater cruising. “I’m very happy and proud that we will sail her all over the globe,” one of the owners commented at the launch. In fact, they plan to do so with a smaller than normal crew. (Crew accommodations include two cabins plus a double captain’s cabin.)

With an LOA of 96’1” (29.3 meters), the SW96 series features styling and interior design by Nauta Design. The studio also created the overall concept with the shipyard’s team and Farr Yacht Design, which further handled naval architecture. Beam measures 22’8” (6.95 meters). Light weight is a priority, too, which explains why Seatius’ deck employs sandwich construction, with foam coring and carbon fiber skins. Performance should be particularly good in light winds. In addition, a lifting keel—which you get a good look at in the video above—will assist in a variety of conditions.

For the owners’ convenience sailing shorthanded, Seatius has longitudinal jib tracks and hydraulic cars. Also for convenience, and safety, there’s not much difference level-wise between the steering cockpit and guest spot. Speaking of guests, six friends and family can accompany the owners in their travels, due to a four-stateroom configuration. Guests go aft, while the owners have a bit of privacy forward.

Southern Wind Shipyard will release full photography on Seatius following her delivery in April. The owners have an impressive 7,000-mile maiden voyage planned.