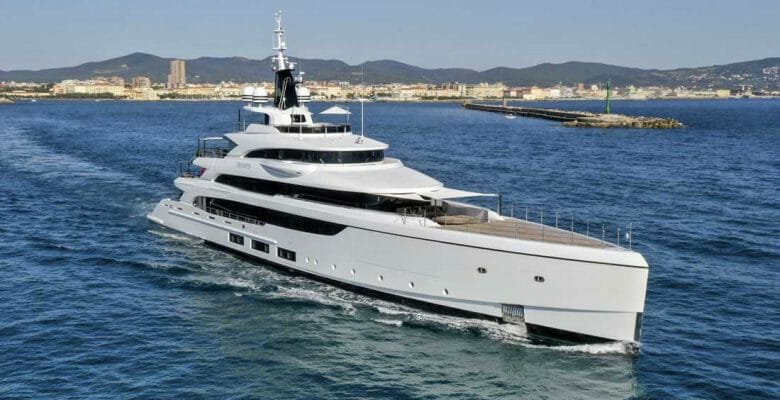 With a volume of 1,050 tons, the six-deck-high Benetti Triumph is on her maiden voyage, having her formal handover to her owner at the end of June.

Despite such towering height, the 214’6″ (65.4-meter) megayacht has a relatively sleek stance, due to the design work of Benetti’s longtime partner, Giorgio M. Cassetta. The yacht additionally has quite large, curving glass, making her outward appearance as notable as the views from the inside.

As for the inside, the Benetti Triumph began work with the studio Green & Mingarelli Design. Although the yacht sold a few weeks ago, the designers’ work—said to be quite opulent in nature—remains in place. The artwork throughout her decks remains, too, by the fine-art photographer David Yarrow. Yarrow is renowned for his black and white compositions, many of which feature wildlife from land as well as sea. He’s additionally a conservationist.

Layout-wise, the Benetti Triumph to some degree follows a traditional pattern, with the primary saloon and dining area on the main deck. She further has a skylounge on her upper deck and guest staterooms—four double cabins—on the lower deck. A handful of areas, including a gym, a sauna, and a massage room, cater to the full owner’s party as well.

But, not everything is traditional. For example, the master suite is on the upper deck, occupying an envious 1,399 square feet (130 square meters). Very Important People have a sizable suite forward on the main deck. To put it into more perspective, the yacht has a beam of 36’7” (11.2 meters). Because the owner may wish to entertain guests while the yacht is underway, wind screens protect the 10-person dining area on the sundeck. Naturally, a dumbwaiter leading from the lower-deck galley ensures prompt service.

With a 754-square-foot (70-square-meter) beach club, look for the Benetti Triumph in the Med this summer. She can venture much farther, of course, given a range of 4,700 miles at 12 knots under MTU power. And, a touch-and-go helipad means the owner can arrive and depart in style.